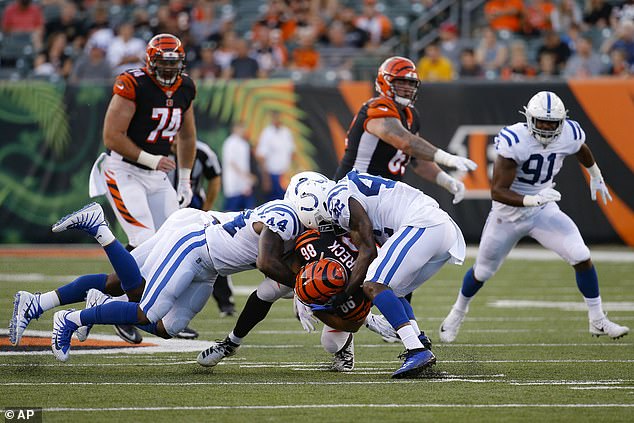 The longer an athlete plays in the NFL, the more at-risk he is for mental memory problems, confusion, depression and anxiety, a new study suggests.

And those who play high-impact positions – typically linebackers, running backs and special teams players – have the greatest number and worst mental and cognitive problems.

The multi-billion-dollar league has come under fire in recent years since the suicide of Aaron Hernandez shed light on chronic traumatic encephalopathy (CTE), a condition that results from multiple head traumas.

Players who suffer the condition may become more aggressive and prone to mental illness and suicide, and a new Harvard University survey of 3,500 former NFL players suggests that one in eight of them have disturbing cognitive symptoms.

The longer athletes NFL careers are, the more at risk they are to have disturbing cognitive and mental health symptoms like memory loss and depression after they retire, a new study finds – and those who play high-impact positions are at higher risk (file image)

Aaron Hernandez played tight-end for three seasons with the New England Patriots before his 2017 suicide.

His CTE was the worst leading researchers in the field from Boston University had ever seen – but its hardly the only case.

CTE develops after multiple head injuries, but can only be diagnosed with complete certainty by an autopsy, as was performed on Hernandez.

And symptoms that suggest the degenerative disease don’t typically become evident until years after the head traumas were sustained.

But as the disease progresses and the harmful proteins that are its hallmark spread through the brain, sufferers may develop dementia.

CTE has fueled criticism and alarm toward the NFL.

And those with the most illustrious careers may be at the greatest risk, the new study, published in The American Journal of Sports Medicine suggests.

The Harvard researchers asked nearly 3,500 former professional players about their careers and mental states since retiring.

Perhaps unsurpisingly those who had sustained concussions on the field (or otherwise) were at greater risk all manner mental health and cognitive function problems, even 20 years after they’d been hurt.

In a given season, well over 100 concussions happen during NFL games – although they were down in 2018 to 135 from the previous year’s 190 cases.

Not everyone sustains a concussion – or even many concussions – suffers CTE, but the more they sustain the more at-risk they are for cognitive symptoms.

In total, one in every eight of the retired players surveyed by Harvard reported symptoms like memory loss, vision problems, depression, dizziness and confusion, which are associated with the chronic brain disease.

Risks were significantly higher for the men with the longest careers.

A third of those who played pro football for 10 years or longer reported these symptoms.

Not all football positions are equally dangerous, however.

Kickers, punters and quarterbacks were at relatively low risk for cognitive problems.

Interestingly, while a longer professional career was very predictive of their cognitive and mental health down the line – every five NFL seasons bumped their depression risks up by nine percent – starting the game young had no effect either way.

‘The results of the research highlight just how critical it is to continue to find ways to prevent head injuries from occurring in the first place because of the many downstream and long-lasting effects on physical, cognitive and mental health,’ said Dr Ross Zafonte, lead author of the study.