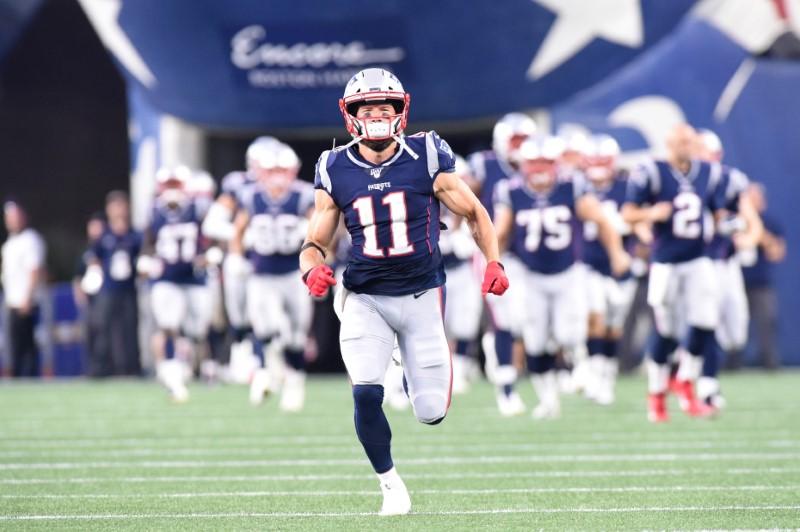 New England Patriots wide receiver Julian Edelman is expected to be fine after initially injuring his hand during the team’s final preseason game, per a published report Friday.

NFL Network’s Ian Rapoport reported that Edelman is expected to be no worse for wear after landing awkwardly on his left hand following a 20-yard reception early in Thursday’s preseason 31-29 loss versus the New York Giants.

Edelman was seen consulting with trainers while sitting out the remainder of the game.

—Oakland signed center Rodney Hudson to a multiyear contract extension. And while the team didn’t announce terms, a published report said the deal will make him the NFL’s highest-paid center.

—Tennessee agreed to terms on a contract extension with center Ben Jones, who has started 80 consecutive games in the past five seasons.

The extension is for two years and $13.5 million, according to NFL Network’s Ian Rapoport.

Jones, 31, has played in all possible 112 games in his seven-year career, tied for the longest active streak with Kansas City’s Mitchell Schwartz among offensive linemen. Jones was a fourth-round pick of the Houston Texans, spending four seasons with the franchise before signing as a free agent with the Titans in 2016.

—Cincinnati rookie running back Rodney Anderson is believed to have torn his right ACL on Thursday night in the Bengals’ final preseason game, according to multiple reports.

The reports added he likely will miss the season. He left the game, a 13-6 loss to Indianapolis, in the first quarter after a four-yard run.

—The NFL conditionally reinstated linebacker Rolando McClain, a former No. 8 overall pick who hasn’t played in three seasons, according to multiple reports.

Drafted by the Oakland Raiders in 2010, McClain was suspended indefinitely in 2016 after he repeatedly failed drug tests. He last played in 2015 with the Dallas Cowboys, who hold his rights.

—Los Angeles left tackle Russell Okung will not play in the season opener against Indianapolis.

—San Francisco running back Jerick McKinnon will be placed on injured reserve and is expected to require an additional procedure on his surgically repaired knee.

McKinnon, 27, missed all of last season recovering from a torn ACL in his right knee in August 2018. He had signed as a free agent from Minnesota and expected to be the starting running back in San Francisco.

Gano, 32, missed the final four games of the 2018 season with an injury in his plant (left) leg. He kicked at the start of training camp but was unable to continue because of soreness.

Because Gano will not be on the 53-man roster the Panthers submit before Saturday’s deadline, he won’t be able to return in the 2019 season.

Pierre-Paul, who sustained a cervical fracture during an offseason car accident, will not be eligible to play or practice until after Week 6 on Oct. 14.

The teams did not officially announce the trade, however ESPN and NFL Network reported that the Patriots will send Dawson and a seventh-round pick in the 2020 draft to the Broncos in exchange for a sixth-round draft selection.

Marshall signed a one-year contract worth up to $4.1 million with the Raiders in the offseason after spending six seasons with Denver.

—New England acquired center Russell Bodine from Buffalo in exchange for a sixth-round pick in the 2020 NFL Draft, according to multiple reports.

NFL Network reported that the Patriots are expected to place starting center David Andrews on injured reserve. Andrews was hospitalized with blood clots in his lungs earlier this week.

—New York Jets president Neil Glat has resigned from his role and will become a senior adviser, the team announced.

Glat oversaw the Jets’ off-field activities for the past seven years. His duties included redesigning the uniforms, signing a gaming deal with MGM and expanding fan interactions.

—Pro Football Hall of Famer Jim Langer, who played every offensive snap at center for the unbeaten 1972 Miami Dolphins, died Thursday, the team announced. He was 71.

Langer spent 10 years with the Dolphins, from 1970 to 1979, earning first-team All-Pro honors four times and six selections to the Pro Bowl. He finished his career with two seasons with his home-state Minnesota Vikings.

Who 'might be interesting Real & Barca'? Find out in Garth Crooks' team of the week

What to look for in midweek Championship games