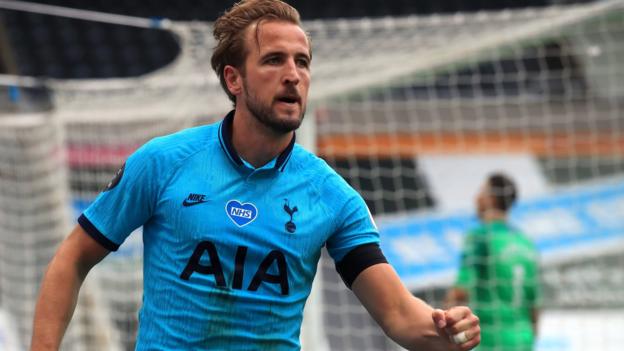 Jose Mourinho praised the “incredible” Harry Kane after the Tottenham striker passed 200 goals at club level with a double in Wednesday’s 3-1 win against Newcastle.

“Harry Kane knows how important he is, he is incredible,” said Spurs boss Mourinho.

“After such a difficult recovery [from injury] he is playing every minute of every game, this is the fourth game with two days in between and Harry gave everything.”

The victory took Spurs up to seventh and boosted their Europa League qualification hopes.

It was also the first time Mourinho had won a Premier League game at St James’ Park in his eighth attempt.

The visitors led in the first half when Son Heung-min drilled a low shot into the bottom corner moments after the drinks break disrupted Newcastle’s dominance.

Dwight Gayle almost levelled when his header hit the post and Matt Ritchie blasted an equaliser home 11 minutes after the restart.

But that parity only lasted four minutes as Kane headed home a deep cross from substitute Steven Bergwijn.

That was the England captain’s 200th club goal, with 184 coming for Spurs and the other 16 for loan clubs Millwall, Leyton Orient and Leicester.

He got the 201st late on with another header after Martin Dubravka parried Erik Lamela’s shot.

It was an impressive performance from Newcastle, who managed 22 shots to Spurs’ eight, but their season is just petering out as uncertainty over their Saudi Arabian takeover continues.

Spurs stay in hunt for Europe

Spurs manager Mourinho said in the build-up to the game they would “fight” for a Europa League spot even though he compared it to Lewis Hamilton racing in “Formula Two or 3,000 or whatever you call it”.

His previous seven visits to Newcastle in the league with Chelsea and Manchester United had resulted in three draws and four defeats.

They were unchanged from the side who beat Arsenal on Sunday, with Serge Aurier starting just two days after his younger brother Christopher was shot dead. The Ivory Coast right-back will return to France on Thursday to see his mother.

Spurs were second best until the drinks break with Mourinho reshuffling to a 4-2-3-1 from 4-4-2 and it immediately paid dividends.

Lucas Moura stole possession off Fabian Schar before picking out Kane, who found Giovani lo Celso. He fed Son, who smashed his shot through DeAndre Yedlin’s legs and into the net.

Son has been directly involved in more goals under Mourinho than any other Spurs player (10 goals and eight assists).

Ritchie’s fine goal got Newcastle level but Kane – who was quiet until then – headed home to settle the game as Bergwijn got his first Premier League assist.

Kane then managed a second header – the first time he has ever achieved that in a Premier League game – after starting a move in the centre circle before finishing it off from close range.

They are now within one point of Wolves in sixth place, which could be the final Europa League slot if Arsenal win the FA Cup.

Steve Bruce’s Magpies are 12 points away from the top seven and the bottom three with two games to go.

But they cannot start planning for next season with Premier League lawyers assessing their proposed takeover for the last three months.

Bruce said before the game “we need a decision for everyone’s sake”.

He made three changes at the back from last weekend’s defeat by Watford, with a wing-back formation, and they had seven shots to Spurs’ one before the visitors took the lead.

They played well throughout and had more possession than Spurs and almost three times as many shots by full-time.

Allan Saint-Maximin was lively as always and forced Hugo Lloris into three saves.

They got their goal when Valentino Lazaro went on a mazy run and Aurier booted the ball straight to Ritchie, who smashed a screamer past Lloris.

But they were made to pay by the clinical Kane as their six-game unbeaten home run in the league came to an end.

‘The best we’ve played in a long time’ – manager reaction

Spurs manager Jose Mourinho told BBC Sport: “The team was tired before we even started. We had resilience and a great desire to win the match and to fight until the last for our objective, which is the Europa League.

“Since I started we are fourth in the table. If we cannot get the Champions League then the Europa League is important.

“No doubt the subs were important. I knew they would give us the freshness that we needed.

“I am proud of them and happy with the points. Serge Aurier is a very strong character, every person is different and in his case he wanted to play.”

Newcastle boss Steve Bruce: “It’s the best we’ve played in a long time. They were excellent. Realistically we were safe months ago so the challenge has been can we finish as best as we can? Their attitude and application was excellent today and you don’t always get what you deserve.

“We were naive after we equalised and we gave Harry Kane too much room. You know it’s a goal and that’s the difference, that quality at the top of the pitch.

“Fabian Schar looks like he has dislocated his shoulder and Allan Saint-Maximin has a calf [injury] – we’ll have to see on him but we are down to the bare bones. We were already missing seven.

“It’s about getting a few back for the start of next season now.”