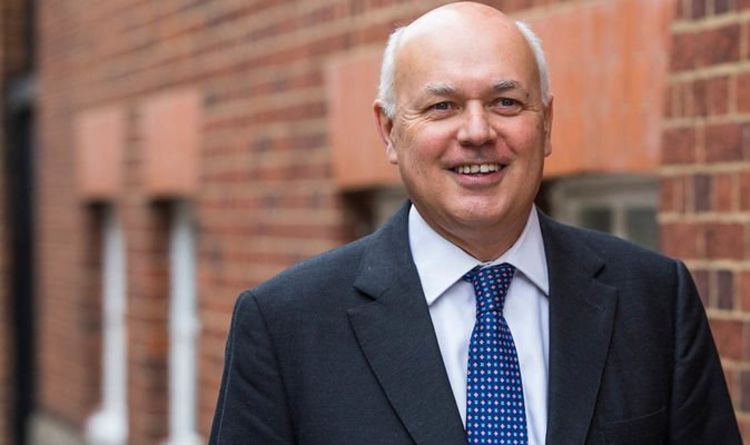 The former Conservative Party leader was the mastermind of the Government’s controversial Universal Credit welfare reforms while he was the work and pensions secretary under David Cameron. Opposition parties said it “beggared belief” that someone whose policies had caused so much distress should be honoured in this way.

In government, he argued the changes were designed to end the benefits trap, ensuring that it always paid for claimants to take work, while simplifying the system.

However, complications with the roll-out of the new system and delays in making payments were blamed for driving thousands of low-income families into poverty.

In 2016, Mr Duncan Smith unexpectedly resigned from the cabinet, attacking the Government’s policy of welfare cuts.

An ardent Brexiteer, as a backbencher he was a leading light in the Tory European Research Group (ERG).

Iain Duncan Smith is being given a knighthood (Image: GETTY)

A Labour Party spokesman said it was “unfortunate to see that one of Boris Johnson’s first priorities” was to reward Mr Duncan Smith with a knighthood.

This is due to him being the “primary architect of the cruel Universal Credit system, which has pushed thousands of people into poverty”

They said: ”Boris Johnson should be trying to fix his party’s shameful mistakes, not give out rewards to those responsible for its failure.”

READ MORE: New Year’s Honours list IN FULL: Who has been honoured by Queen?

READ  Nelson's Column: What on earth is the point of Priti Patel's points system?

She said: ”It beggars belief that Iain Duncan Smith has been rewarded in the New Year’s Honours list.

Meanwhile, the veteran Conservative MP Bob Neill, who was chairman of the Commons Justice Committee in the last Parliament, is knighted.

A number of household names from the worlds of showbiz, sport and politics have been recognised in the New Year Honours list,  along with a fundraising schoolboy.

British-born Australian songstress Olivia Newton-John is among an array of figures from the arts, having been made a dame for services to charity, cancer research and entertainment, while critically acclaimed Bond director Sam Mendes gets a knighthood for his contribution to drama.

Schoolboy Ibrahim Yousaf, the youngest person on the list at 13, is handed a British Empire Medal for raising thousands for his community in Oldham.

Iain unexpectedly resigned from the cabinet in 2016 (Image: GETTY)

D-Day veteran Harry Billinge, 94, whose fundraising efforts have made headlines around the world, is made an MBE for services to charity.

Mr Billinge, from St Austell in Cornwall, was just 18 when he landed on Gold Beach in Normandy on June 6 1944.

Battle of Arnhem veteran Wilfred Oldham, 99, from Bury, receives an MBE for services to commemorations and UK/Dutch relations in the Diplomatic Service and Overseas list.

Elsewhere, James Charles Macaulay Booth, from Somerset, and Grace Friar, from Northumberland, who were born on the same day 98 years ago, were recognised for services to their community and charity.

One of the younger recipients of an MBE, 27-year-old Mete Coban, from Hackney in London, said he was proud to receive an award for services to young people – 22 years after he was moments from being kicked out of the country when border force officers arrived outside his home.

Mr Coban, originally from northern Cyprus, said: “My parents were served their last notice to be deported back to northern Cyprus, so I think the significance for them to see their son, 23 years later go on and be recognised by the honours system, I think it’s huge.

“I want to make sure I can do it in the right way.”