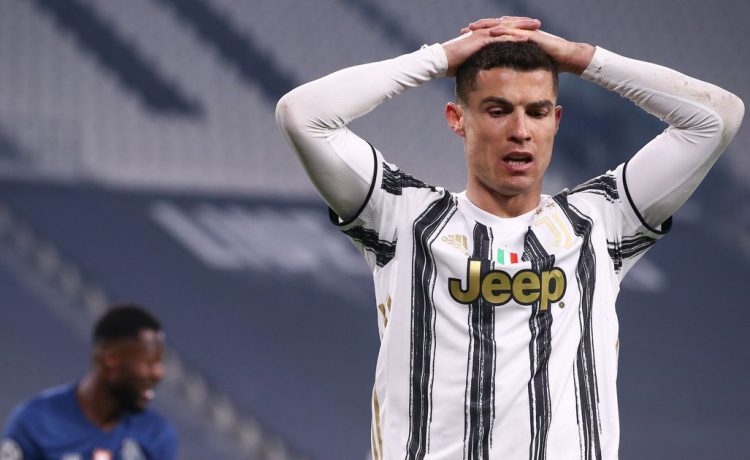 Juventus chief Fabio Paratici admits Cristiano Ronaldo’s contract is “not on the agenda” after the Italian club were dumped out of the Champions League.

Porto upset the odds to progress on away goals with the Portuguese star coming in for heavy criticism following the Italian side’s exit.

Ronaldo turned his back as Sergio Oliviera fired home Porto’s second and decisive goal with his error labelled “unforgivable”.

Juventus have now failed to progress past the quarter finals in each of Ronaldo’s three years at the club which has cast doubt over his future.

The 36-year-old has just over a year to run on his deal in Turin, but Paratici concedes they have no plans to sit down with him anytime soon.

He told Sky Italia : “Fortunately, there’s a year left on his contract; we have time eventually to discuss it with him.

“Let’s just say it’s not on the agenda right now.”

Ronaldo has continued to be prolific for the Old Lady, scoring 92 times in 121 appearances, but has copped criticism for preventing the team transitioning under Andrea Pirlo.

The five-time Ballon d’Or winner is commanding a huge salary in Turin and Patrici insists both parties will need to consider their options when it comes to deciding his future.

“Cristiano has his career in his hands,” he added.

“Always with these great players you know that when they decide to end their experience with one team and move on to another experience, it’s they who decide, and you have to respect that decision.

“We have to consider how he will feel in order to continue or not once his contract expires.”

Pirlo, who is in his first year as boss, has defended his star man in the wake of criticism.

He said: “We choose the players to go in the wall. It had never happened before that they’d turn around, maybe they felt it was so far out that they didn’t sense the danger.

“It was a mistake, it usually doesn’t happen, the players didn’t feel it was a dangerous situation and conceded a goal.”