A NEW Netflix trailer for The Witcher promises monsters, magic and massacres – as the November release date is confirmed.

The show – which has been dubbed the ‘new Game of Thrones’ – stars Henry Cavill as monster hunter Geralt of Rivia.

The series is a new TV adaptation of the popular fantasy novel saga written by Andrzej Sapkowski, with the trailer promising plenty of fight sequences and tension.

“You’re a mutant, created by magic, roaming the continent hunting monsters for a price.”

Wearing a mask, she says sexily: “I thought you’d have fangs or horns or something.”

The Witcher replies dryly: “I had them filed down.”

As more sword fighting is seen, the Witcher is seen having rocks thrown at him by angry villagers before being asked: “People call you a monster too, why not kill them?”

The Witcher replies: “Because then I am what they say.”

In another sexy scene, Henry sits topless in a pool of water as he’s asked: “They say Witchers can’t feel human emotion, what do you feel?”

READ  What to Blow Your Gift Cards on at Walmart

As another montage of action is seen, he replies in a voiceover: “Evil is evil, lesser, greater, meddling. It’s all the same.”

As the Witcher struggles to find his place in the world, a young princess seeks him out, while he is also drawn to a powerful sorceress.

As a huge battle is shown, the Witcher is warned: “If you dismiss her, you will unleash true calamity upon us all.”

GET ME OUT HERE!

As the trailer reaches a crescendo of action, the Witcher replies: “I’ll take that chance.”

It ends with the confirmation that it will premiere on Netflix on Friday, December 20.

Bye-Bye Bébé: Catherine O'Hara on Her Journey With Moira Rose and Schitt's Creek 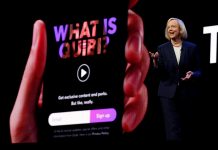