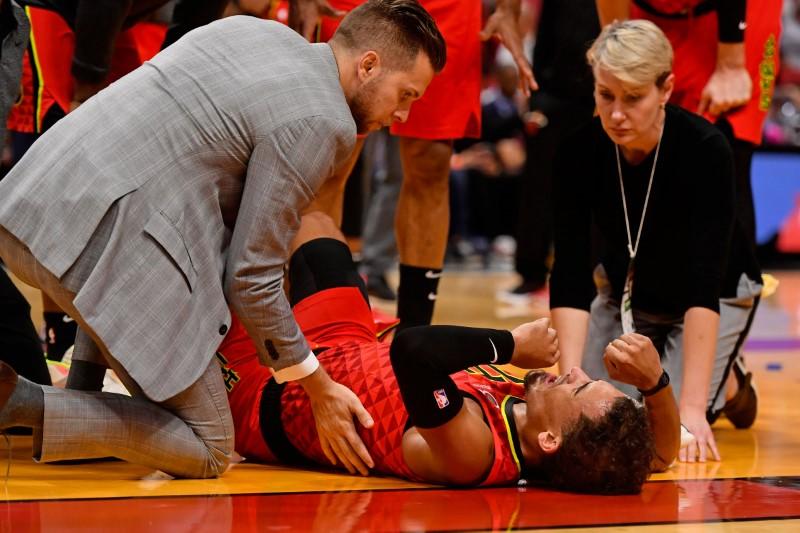 In a game marred by an injury to star Atlanta point guard Trae Young, the Miami Heat and Jimmy Butler defeated the visiting Hawks 112-97 on Tuesday night.

Atlanta’s John Collins led all scorers with 30 points. Miami rookie Tyler Herro had 19 of his 29 points in the second quarter, and Butler — making his Heat debut — added 21 points. Goran Dragic also had 21 points for Miami.

Young, who entered the game ranked second in the NBA in scoring (34 points per game) and tied for fifth in assists (9.0), injured his right ankle with 9:57 left in the second quarter and did not return.

Shortly after the injury, the Hawks announced Young sustained a sprained right ankle and would not return to the game. ESPN reported that X-rays taken immediately after Young left the court were negative and that the team is optimistic the injury is not serious. According to the report, Young will undergo an MRI exam soon.

Anthony Davis scored 40 points and grabbed 20 rebounds in 31 minutes, and host Los Angeles used a third-quarter burst to roll past Memphis for its third straight win.

Davis set a franchise record for free throws made by hitting 26 of 27 attempts, converting 18 in the third quarter to spark a 22-0 run that allowed the Lakers to blow away the Grizzlies. Memphis failed to score in the final 5:47 of the third.

Davis, who was 7 of 17 from the floor, played despite a sore shoulder he hurt in a Sunday win over the Charlotte Hornets. He exhibited discomfort throughout the game but played through it. LeBron James had 23 points and eight assists for the Lakers. Rookie point guard Ja Morant scored 16 points and Jonas Valanciunas had 14 points and 11 rebounds for the Grizzlies.

Luka Doncic was held to 12 points but nine Mavericks players scored in double figures in handing the Nuggets their first loss of the season.

Paul Millsap had 23 points and eight rebounds, Will Barton had 19 points and 11 boards, and Nikola Jokic had 10 points, 10 rebounds and 10 assists for Denver. Jamal Murray and Gary Harris had 16 points each for the Nuggets, who lost the lead two minutes into the fourth quarter and never recovered.