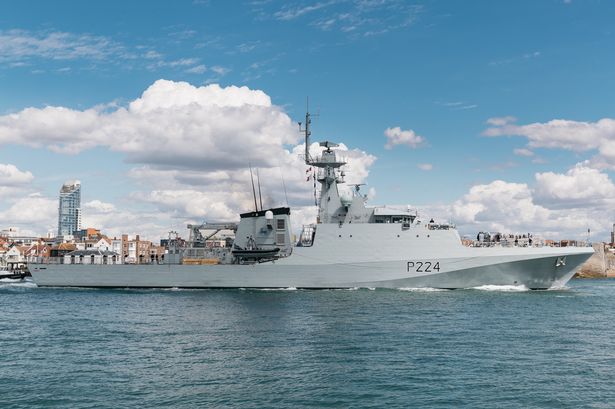 EXCLUSIVE: HMS Medway was stationed in the West Indies to help with disasters – but was out of action after a prang with a tug boat

A Royal Navy ship on standby to help with Caribbean aid relief when natural disasters strike was unavailable when a volcano erupted because it had been damaged in a crash.

British gunboat HMS Medway, a River-class offshore patrol vessel (OPV) like those Boris Johnson sent to Jersey last month in a fishing row with the French, is permanently stationed in the West Indies.

Some 16,000 residents on St Vincent, a former British colony, were forced from their homes by an explosive eruption of the La Soufriere volcano erupted on April 9.

Many were left without power or running water when ash blanketed the island – but the Medway was unable to respond.

La Soufriere’s eruption triggered the evacuation of thousands of homes
(

Now, the Mirror can reveal the 2,000-tonne vessel, which was only commissioned into the Navy in September 2019, was undergoing emergency repairs after a crash with a tug boat when the volcano exploded.

“As a result, she was not available for tasking.”

The revelation was forced out of the Government by former head of the Navy, Admiral Lord West.

The peer, who was First Sea Lord from September 2002 to February 2006 and a Security Minister in the last Labour government, said: “If you have a prang it’s always a bloody nuisance.”

The Medway was stationed in the Caribbean so it could bolster humanitarian operations when needed, added Lord West.

“One of the main reasons to have a ship out there is to go and assist those islands when there are disasters,” he said.

“It seemed to me extraordinary that we had a volcano – and where was it? There was no sign of it.”

According to shipbuilder BAE Systems, the gunboat had only just undergone two months of “successful” planned maintenance.

The defence firm said the ship was serviced in December and January in the US.

A Royal Navy spokeswoman said: “On February 3, 2021, a minor incident occurred between HMS Medway and a tug in Bermuda while berthing in the harbour.

“The incident did not prevent HMS Medway from responding to the relief effort following the volcano eruption.”

Answering a separate parliamentary question, Baroness Goldie said the Ministry of Defence had “not received any requests for UK military support from the Government of St Vincent and the Grenadines”.

It is understood the Medway could have helped with the relief effort after it had been repaired, if support had been requested.

READ  Boris Johnson given bombshell warning to lift lockdown soon or face leadership threat – from MP who ousted Theresa May
Share on FacebookShare on TwitterShare on PinterestShare on Reddit
newsgrooveJune 2, 2021