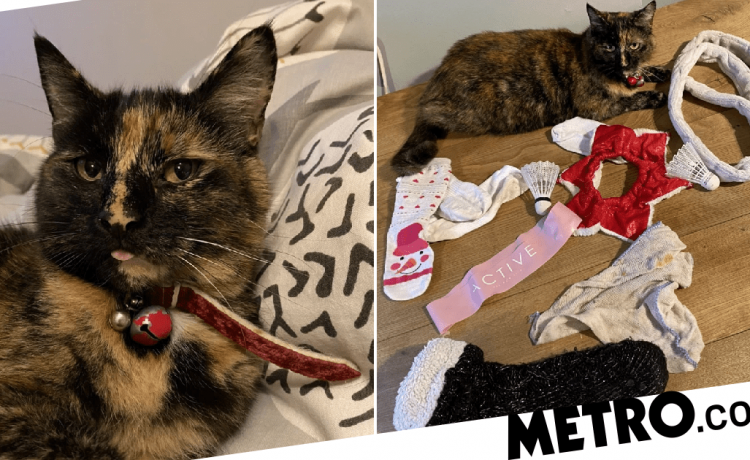 Kee Kee the cat has a dark and destructive vice: stealing people’s underwear and bringing it back to her home.

This habit doesn’t seem to bother Kee Kee much, and she doesn’t appear to have any plans to tackle her strange addiction.

But it is causing a bit of embarrassment for the seven-year-old cat’s owner, Georgia Careless.

Kee Kee has so far brought home piles of socks, underpants, knickers, and even a Ted Baker bikini.

Georgia reckons her pet is sneaking into neighbours’ homes through open windows, doors, and cat flaps, but has no clue why Kee Kee prefers underwear over other treasures.

Some of her other finds include juggling balls and shuttlecocks.

Georgia, 21, has now had to return some of the more expensive items by listing them on Facebook.

‘She brings in the weirdest things, we call her Naughty Torty,’ says Georgia, of Wells, Somerset.

‘She is worse in the summer, when people have their doors open.

‘She’s crafty and never seems to get caught. She brings things in along the top of the fence and then through three cat flaps before leaving them for us.

‘There was one day where in the space of half an hour she brought us eight pairs of socks, one at a time.’

Kee Kee also has a long-standing feud with a nearby tortoise – regularly sneaking food away and bringing it back to Georgia’s house.

‘I’m pretty sure the food items she brings back are from a tortoise that lives a couple of roads up to us and nicks his lunch,’ Georgia added.

‘She knows what time to go, bringing stuff back the same time every day – normally a piece of lettuce and some crumbs.’

Do you have a cat naughtier than Kee Kee?

Get in touch to tell us more by emailing MetroLifestyleTeam@Metro.co.uk.


MORE : My cat has more followers on social media than I do


MORE : Mum will never leave kids with her credit card again after they used it to buy shoes for their cockerel


MORE : Dog with a remarkably long neck looks like a cross between a pooch and giraffe

READ  You can now use pet face swap to see what your dog would look like as a cat
Share on FacebookShare on TwitterShare on PinterestShare on Reddit
newsgrooveNovember 26, 2020