NASA warning: Asteroid twice the size of the Shard set for 'close call' with planet Earth 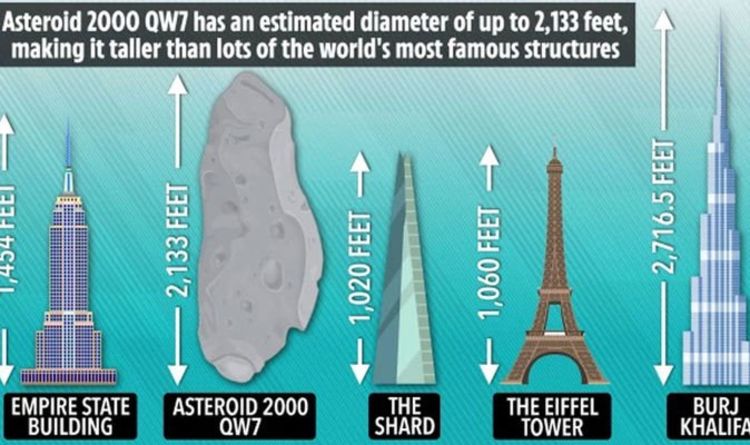 An asteroid twice as large as London’s Shard, the UK’s tallest building, is set to pass by the planet in September. Asteroid 2000 QW7 is estimated to be between 290 meters and 650meteres in diameter, the latter making it comfortably twice as large as the Shard which measures at 306 meters NASA’s Centre for Near-Earth Object Studies revealed that the asteroid is travelling at a speed of about 14,4000 miles per hour and will pass 3.3 million miles from Earth.

The space agency has said in astronomical terms it is going to be a “close call”.

Astronomers don’t believe the asteroid poses any danger or is likely to strike the planet but NASA’s Centre for Near-Earth Object Studies will continue tracking it.

In June, astronomers showed that telescopes could provide enough warning to allow people to move away from an asteroid strike on Earth.

Astronomers at the University of Hawaii used the ATLAS and Pan-STARRS survey telescopes to detect a small asteroid before it entered Earth’s atmosphere on the morning of June 22.

However Earlier this month SpaceX billionaire CEO Elon Musk admitted that the Earth currently has no defence for impending strikes from large asteroids.

This grim revelation came as the CEO was responding to Express.co.uk’s Apophis ‘God of Chaos’ asteroid story.

NASA has already begun preparations for the arrival of asteroid 99942 Apophis – dubbed the ‘God of Chaos’ asteroid – which will skim past the earth in 10 years.

READ  'The army is our friend' against coronavirus in remote communities, Aboriginal health group says

The asteroid measures 340 meters across and will pass within just 19,000 miles of Earth’s surface.

Apophis is one of the largest asteroids to pass so close to the Earth’s surface and a collision with the planet has the potential to be devastating for all life on Earth.

Earlier this year NASA announced its first Planetary Defence Technology Demonstration for the next 3 years.

It will get one chance to hits its target, the small moonlet in the binary asteroid system Didymos.

The asteroid poses no threat to Earth and is an ideal test target as it allows scientists to study how the smaller asteroids orbits.