Inside NASA’s ‘space hotel’: Padded walls and ‘the largest window ever constructed for space’ to feature in ‘holiday unit’ to accommodate the first commercial tourists visiting the ISS

NASA has selected a private company to build the first ever ‘space hotel’ for tourists aboard the International Space Station.

The US space agency has joined forces with Texas-based startup Axiom Space to provide a habitable module to be attached to the ISS for commercial use.

Concept images from the company show that the ‘Axiom Segment’ will include plush crew quarters and a 360-degree Earth observatory window – the largest ever constructed for space.

Proposed designs for habitation modules show comfy padded interiors where members of the public will be able to enjoy panoramic views of Earth.

NASA had announced plans last year for tourists to visit the ISS from 2020 onwards, as a way to ‘commercialise low-Earth orbit’.

But at an eye-watering $35,000 at the very minimum, a trip to the famous space station won’t come cheap. 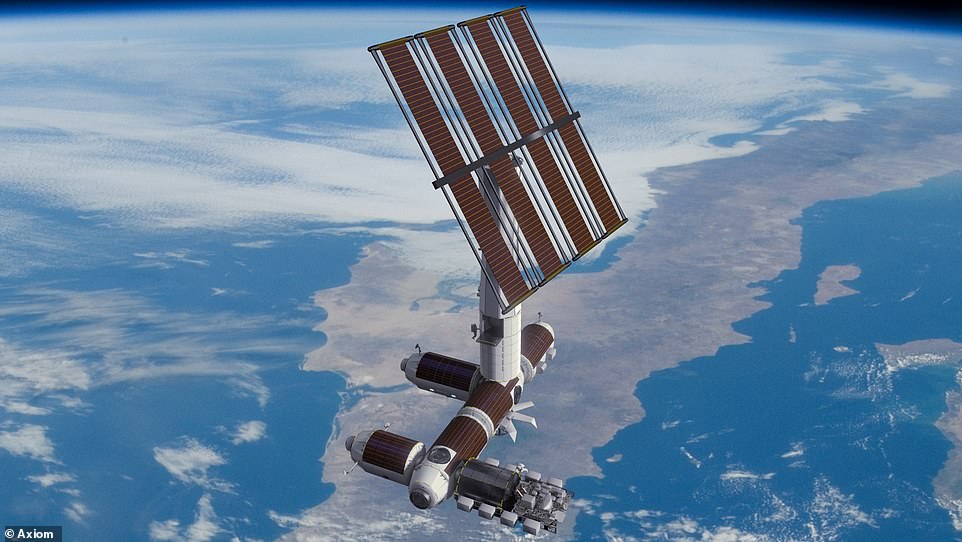 The Axiom Segment will be constructed while attached to the ISS and, at the end of the ISS’ life, detach and operate on its own (pictured). The ISS i set to be decommissioned towards the end of this decade 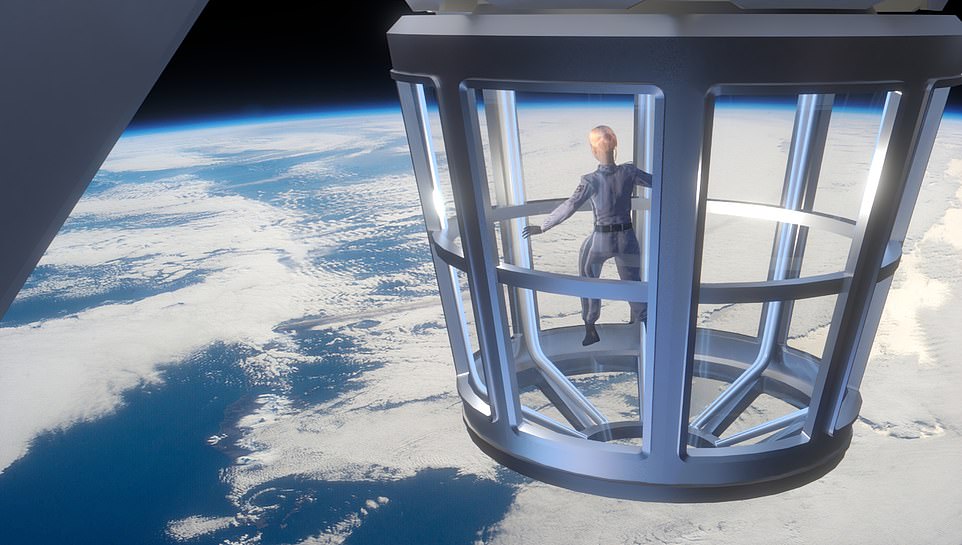 Don’t look down: NASA says the ‘space home’ will allow the first ISS tourists to enjoy views from the ‘largest Earth window’ – a 360 degree viewing platform that protrudes from the bottom of the Axiom Segment

The ‘Axiom Segment’ is made up of three modules – a node module, a research and manufacturing facility and crew habitat with a large-windowed Earth observatory.

The first parts of these segments will launch to the ISS in late 2024.

‘The first elements of Axiom will attach to the forward node of the ISS, providing modern accommodations for more astronauts, a first-of-its-kind immersive view of our beautiful Earth, and additional research and manufacturing volume,’ Axiom says on its website.

An animation shows how the Axiom segment will be attached to the ISS in stages: 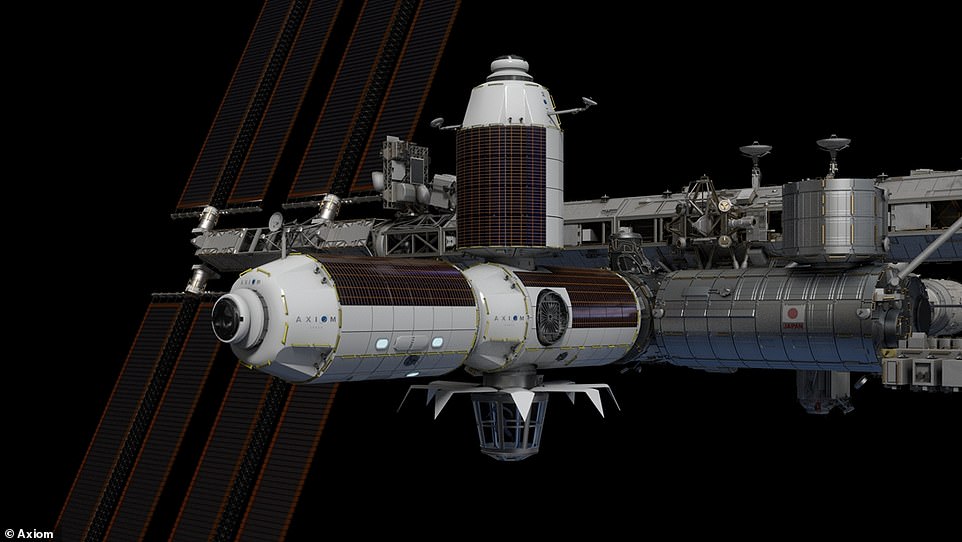 The Axiom Segment will be assembled abroad the International Space Station and then detached as a free-flying independent holiday home for space tourists with at least $35,000 to spare

Axiom has also revealed images of a glass-walled cupola – which the company calls the largest window observatory ever constructed for the space environment. 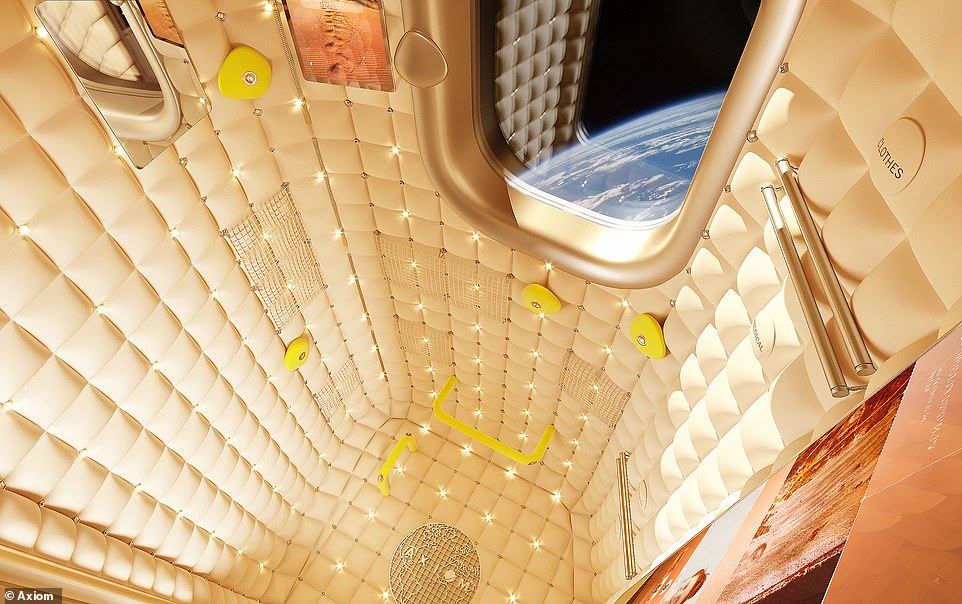 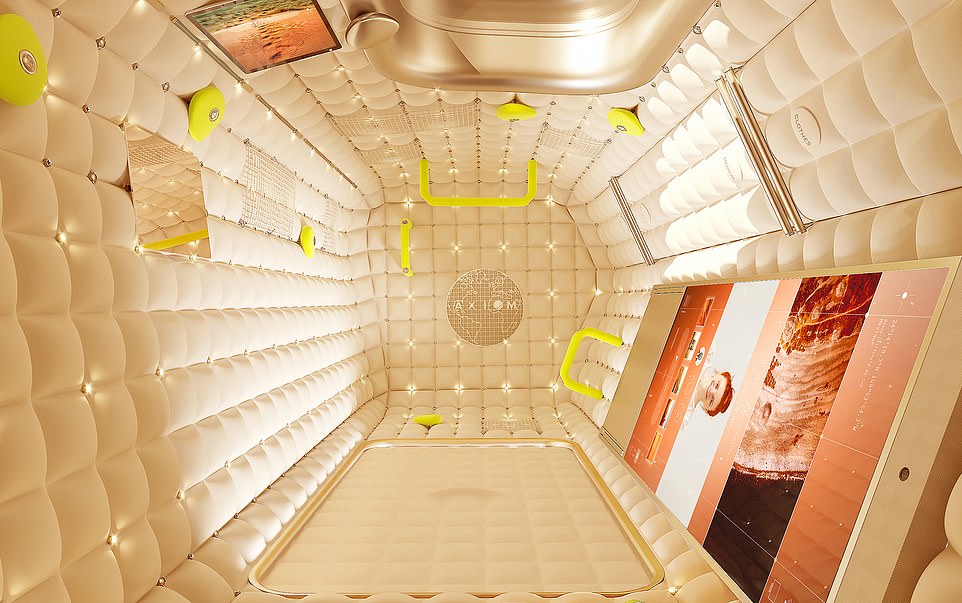 READ  Japan space probe on its way back after asteroid mission

The cosy nests have touchscreens embedded in the walls, as well as LED lights, mirrors and the all-important handrails for navigating one’s self around in low gravity

Axiom, which was founded in 2016 with the purpose of expanding human civilisation into Earth’s orbit, will launch crewed flights to the Axiom complex at a rate of about two to three flights a year.

‘Axiom’s work to develop a commercial destination in space is a critical step for NASA to meet its long-term needs for astronaut training, scientific research, and technology demonstrations in low-Earth orbit,’ said NASA Administrator Jim Bridenstine.

‘We are transforming the way NASA works with industry to benefit the global economy and advance space exploration.’

He added that this was a ‘similar partnership’ to the ones NASA has with private companies SpaceX and Boeing, which this year ‘will return the capability of American astronauts to launch to the space station on American rockets from American soil’. 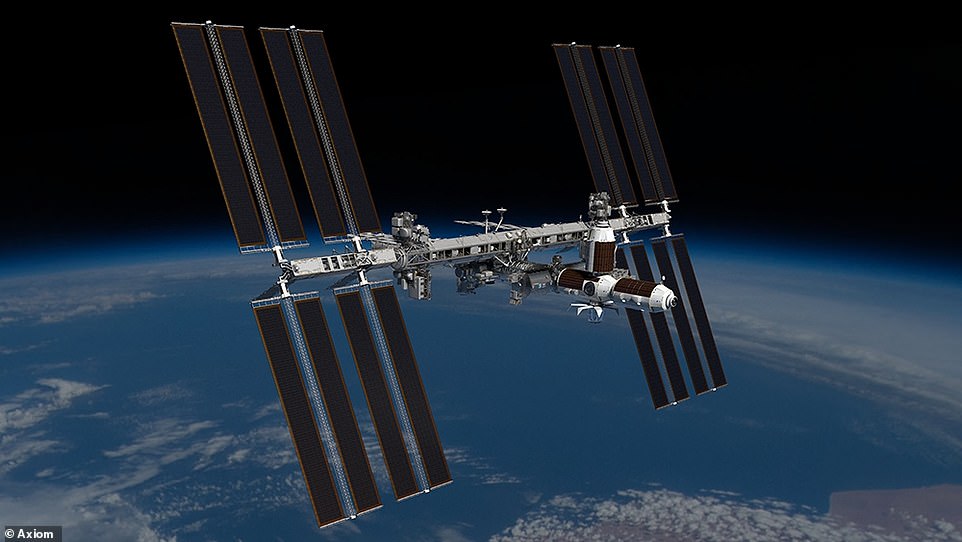 Concept shows the Axiom segment as attached to the International Space Station. The segment will detach before the ISS is decommissioned near the end of the decade

Axiom’s space modules will initially dock on the ISS but will go on to become independent of the space station, which is due to be retired within the decade.

When the ISS reaches its decommissioning date, the Axiom Segment will detach and become a free-flying, internationally available commercial space station.

‘Our goal is to advance the state of humanity and human knowledge,’ said Axiom founder and executive chairman Dr Kam Ghaffarian.

‘A commercial platform in Earth orbit is an opportunity to mark a shift in our society similar to that which astronauts undergo when they see the planet from above.’

HOW DOES NASA PLAN TO COMMERCIALISE LOW-EARTH ORBIT?

NASA announced in 2019 that it would open up the International Space Station (ISS) for commercial business.

Commercial companies will play a role in establishing ‘a sustainable presence’ in low-Earth orbit (LEO), which extends up to 1,200 miles from the Earth.

NASA says that one day it will just be one of many customers in LEO.

NASA says it will:

1. Partner with industry to develop and demonstrate new LEO destinations.

2. Turn over LEO operations to the private sector.

3. Establish commercial use of the ISS, including R&D tests through the ISS national laboratory.

The space agency’s plan to use LEO to make money will help it fund the ambitious upcoming US space projects, including putting the first woman on the Moon by 2024.

What does the world smell like? After so long in a mask, I can barely remember | Arwa Mahdawi

How Gambling Can Affect Your Life