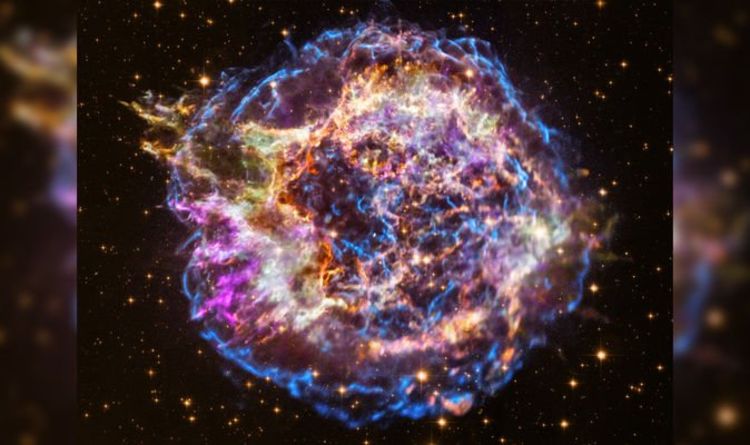 NASA first snapped an image of the supernova remnant in 1999 in what was dubbed Chandra’s “First Light” image. Cassiopeia A sits roughly 11,000 light-years or 64,664,879,000,000,000 miles from Earth. The supernova remnant formed in the final moments of a star’s life, when the star ran out fuel, collapsed on itself and erupted. The stellar explosion showered the region of space around the star with stellar material, likely sometime around 1680.

When the star exploded, it may have briefly been the brightest object in the night sky.

According to NASA, the Cassiopeia A or Cas A image remains the most iconic of Chandra’s snapshots.

The US space agency said: “The shock waves generated by this blast supercharged the stellar wreckage and its environment, making the debris glow brightly in many types of light, particularly X-rays.

“Shortly after Chandra was launched aboard the Space Shuttle Columbia on July 23, 1999, astronomers directed the observatory to point toward Cas A.

“It was featured in Chandra’s official ‘First Light’ image, released August 26, 1999, and marked a seminal moment not just for the observatory, but for the field of X-ray astronomy.”

A neutron star is a very small but very dense stellar core left behind by a collapsing star at least 10 times bigger than our Sun.

After the first image was taken, NASA has returned to Cas A to learn more about this neutron star.

NASA said: “A new video shows the evolution of Cas A over time, enabling viewers to watch as incredibly hot gas – about 20 million degrees Fahrenheit – in the remnant expands outward.

“These X-ray data have been combined with data from another of NASA’s ‘Great Observatories’, the Hubble Space Telescope, showing delicate filamentary structures of cooler gases with temperatures of about 20,000 degrees Fahrenheit.”

The NASA video embedded above shows the observable changes in Cas A over a 10 year period.

The blue regions on the outer edges of Cas show the expanding blast wave of the supernova.

According to NASA, the blast waves are composed of smaller shockwaves reminiscent of sonic booms.

Within these shockwaves, particles of matter are accelerated to incredible speeds and give off strong X-ray radiation.

The shockwave itself travels at breakneck speeds of around 11 million miles per hour.