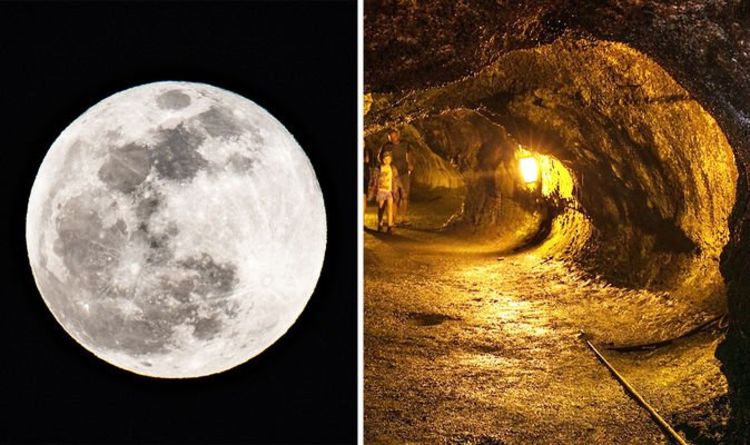 More than 50 years after the legendary Apollo 11 mission, NASA has vouched to return to the Moon in 2024. However, this time, the space agency wants to set up a permanent colony, laying the foundation which will eventually enable the exploration of Mars. One of the biggest problems NASA faces is creating a safe living space for astronauts, away from the dangers of cosmic radiation, space junk and asteroid impacts.

However, Amazon Prime’s “New Frontiers In Space” revealed how that could all soon change.

The 2018 series explained: “When we imagine lunar colonies they mimic cities on a smaller scale and have sweeping vistas that include the Earth hanging above the horizon.

“But that’s a great way to get cancer super fast and so we still don’t know to protect ourselves from cosmic radiation.

“So one solution might be to shoo scenic surface colonies all together in favour of lovely lava tubes.

“Lava tubes on the Moon are basically the same as the ones we would see here on Earth.”

The researcher went on to detail how a safe living space could already have been built for NASA.

He added: “Back in the Moon’s history when it was geologically active, molten rock flowed over its surface.

“The outside layer cooled first, while the inside kept on flowing, but once the Moon’s internal lava flow did cease, left behind were these huge hollow passages.

“Because the Moon has relatively low gravity, it’s possible that these lava tubes could have high ceilings.

READ  'Extinct' deer small enough to hold in one hand reappears in wild, giving hope for other endangered species

“Perhaps large enough to allow a city to be erected inside them.

“We can find these caves by looking for pits, or skylights on the Moon and JAXA and  NASA scientists did just that.”

The series continued, explaining why NASA is interested in exploring the possibility.

“They looked at the area close to Marius Hills Hole and found skylights that might lead to lava tubes.

“Radar data shows a distinctive echo pattern of a loss of power, followed by a peak, suggesting there might be a hollow underground lava tube in the area around these skylights.

“This would be great for astronauts.”

Details of exactly how these caves would help astronauts were then laid out.

It finalised by saying: “The tube’s thick roof would be a natural shield against cosmic and solar radiation, meteor impact, and the Moon’s extreme temperatures.

“It’s even possible that these tubes with the end opening properly sealed with an airlock could be pressurised with oxygen to create a breathable habitat on the Moon.

“That is a far more appealing prospect than living in tiny modules that, frankly, wouldn’t offer nearly as much protection.

“Scientists need to study the area with better instruments to really figure out how big these potential underground lava tubes might be.

“But preliminary evidence all points to these natural structures offering at least some inherent protection, not to mention this simplifies access to safe spaces on the Moon.”