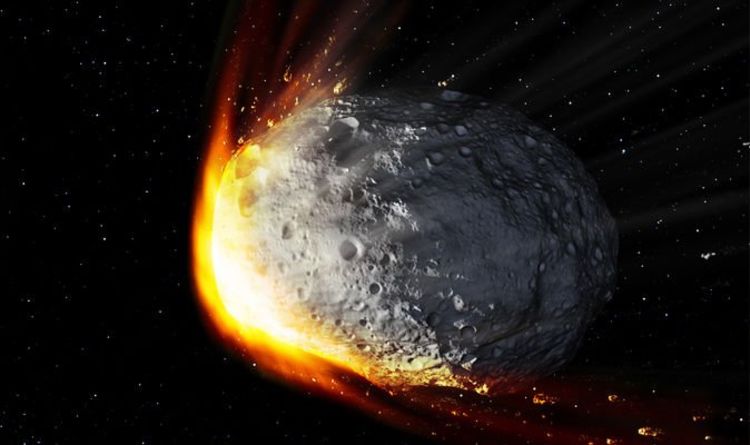 The NASA-tracked asteroid will arrive within close proximity of our homeworld in the late morning hours of Wednesday, August 28. The asteroid, dubbed 2019 OU1, is a so-called Near-Earth Object (NEO) flying on a Close Approach Trajectory. NASA expects the space rock to come flying by dangerously close around 11.36am BST (10.36am UTC). The terrifying moment will mark the asteroid’s closest approach just one month after it was first discovered.

Asteroid 2019 OU1 is an Apollo-type space rock, zipping around the inner solar system on a trajectory similar to Asteroid 1862 Apollo.

NASA first observed the asteroid on July 25 this year and has since made a total of 70 observations to determine the rocks size, speed and trajectory.

An asteroid this big is comparable in size to St Paul’s Cathedral in London or the Washington Monument in the US.

FIND OUT MORE: How often do asteroids hit Earth?

Even at the smaller end of the scale, the asteroid is almost as wide as the wingspan of a Boeing 747 aeroplane.

The asteroid is also hurtling through space at about 13.01km per second or 29,102mph.

A space rock this big would cause considerable damage if it hit a populated area.

A car-sized asteroid is estimated to hit the Earth roughly once a year.

READ MORE: There is a slim chance a 2,700 MEGATON asteroid might hit Earth this October

Thankfully, the odds impact are drastically reduced the bigger an asteroid or comet is.

But is there anything to fear from the flyby of Asteroid 2019 OU1?

On Wednesday, 2019 OU1 is expected to approach the Earth from a distance of roughly 0.00688 astronomical units.

A single astronomical unit measures the distance from the Earth to the Sun, or about 93 million miles (149.6 million km).

In other words, the asteroid will fly by approximately 2.68 times as far as the Moon is.