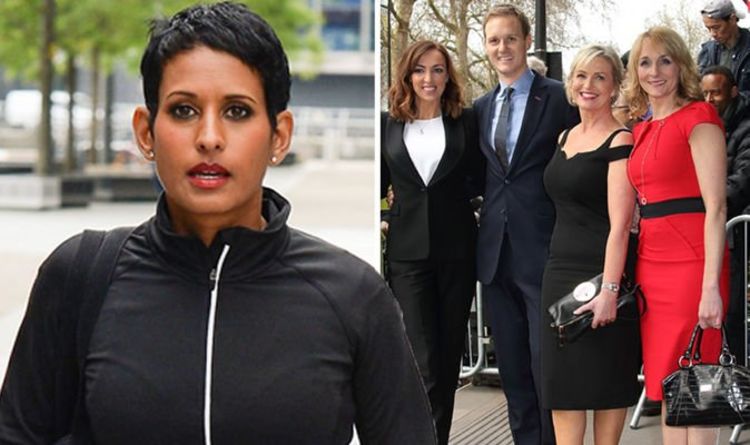 Naga Munchetty, 45, was noticeably absent from the weekend instalment of BBC Breakfast. As well as fronting the news programme, the journalist also hosts her own show on BBC Radio 5 Live three days a week.

Then from Thursdays to Saturdays, she will continue to inform viewers of the latest headlines from around the world on BBC Breakfast.

The TV and radio broadcaster has since taken to Twitter to discuss her recent absence from the show.

Naga was quizzed by a viewer who asked if she had decided to stop presenting Breakfast on Saturdays.

The person in question wrote: “@TVNaga01 Hi Naga! Have you stopped doing Saturday’s @BBCBreakfast now, as you’re doing your radio show as well. I wouldn’t blame you but will miss you on a Saturday although @rachelburden is lovely too.”(sic)

READ MORE: Carol Kirkwood shuts down BBC Breakfast co-star ‘Should be so lucky’

The Breakfast host took the opportunity to confirm that she will be absent from the news programme over the next few weeks as Naga praised her replacement.

It comes as Rachel Burden stepped in to present the BBC programme alongside Charlie Stayt.

In view of her 238,000 followers, Naga wrote: “Hi. Back on Saturdays in a couple of weeks @BBCBreakfast (I think @rachelburden is fabulous too) X.”

In another tweet, another social media user quizzed Naga’s return to Breakfast.

Meanwhile, Naga appeared to be enjoying her time away from her regular duties as she enjoyed the snow.

The small screen regular, who is married to her husband James Haggar, revealed she finally had a chance to try out a new purchase.

Taking to Instagram, the presenter showed off her wellington boots to wear out in the snow.

In view of her 39,000 followers, Naga penned: “Ooh waking up to this! I finally get to try out my first pair of adult wellies. Stay safe if you go out in the #snow.”