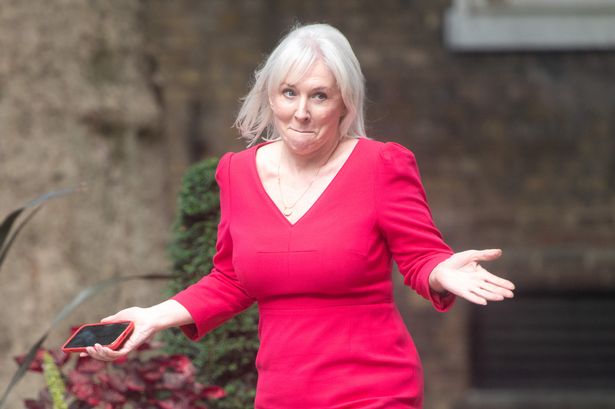 The right-wing Tory was best-known to some Brits for failing a ‘Bug Burial’ by cockroaches on I’m A Celebrity, becoming the first to be voted off in 2012.

You may also know the 64-year-old as a best-selling author, including of the The Four Streets Quartet novels and The Tarabeg Trilogy.

Or as being one of the first Covid cases in Parliament last Spring, while a Health Minister.

But now she’s in the Cabinet, focus is likely to come on her litany of eye-popping tweets and past comments on race, culture, media and gay rights – which, to her critics, are highly offensive.

She told a British journalist to “appreciate” the country she’d lived in for decades instead of tweeting about abuse. And when London’s first Muslim mayor read out an Islamophobic death treat to himself, she responded that he should be talking about Muslim grooming gangs.

Meanwhile she has been a vociferous critic of the BBC (despite sharing a doctored video herself), while giving gushing praise to the GB News channel.

And she has claimed “left-wing snowflakes are killing comedy”.

So buckle up – here are some of the most controversial past comments of the new ‘Minister of Fun’.

Join the debate about Ms Dorries’ comments in the comments section below.

On race, religion and other matters

Twitter users questioned whether a tweet she sent in May 2012 about the black comedian Reginald D Hunt was racist. In the tweet, she wrote: “I have now left the HIGNFY after party. As I looked over my shoulder, Reginald D Hunter was talking to my daughter. #wheresmyshotgunman.”

While we could not find a record of her addressing the questions at the time, at other times she did address claims against her head-on.

In April 2013 she wrote: “Apparently I’m racist because I think Chuck [sic] Umunna looks like Chris Eubank? What would I be if I said he looked like someone who was white??”

She has also made comments on religion. In March 2018 she commented on a video of London’s first Muslim mayor, Sadiq Khan, reading out death threats that called him a ‘Muslim terrorist’.

She responded: “How about, ‘it’s time to act on sex abusing grooming gangs’, instead? #TelfordGrooming #Rotherham #Priorities #leadership.”

Mr Khan is not the mayor for Telford or Rotherham.

.. And here is ex-boxer Chris Eubank
(

In 2017 she suggested there was an “implication” that the Muslim community “votes as instructed” in elections. She commented on texts to Muslim voters during the Stoke by-election, which claimed people who didn’t back Labour would be condemned to hell.

She wrote: “Lowest example of electioneering I have ever seen. It is corrupt and Qs need to be asked re how much the candidate knew/approved in advance?

A screenshot from 2017 appears to show her sharing a tweet from far-right extremist Tommy Robinson. The tweet no longer appears to exist.

Ms Dorries was also criticised after hitting back at Ugandan-born British journalist Yasmin Alibhai-Brown for asking if it was safe to be on Twitter.

She wrote in May 2018: “Yasmin, why don’t you just try to be nice? Maybe appreciate just a little the country and the people you have chosen the [sic] live, work and benefit from all your life”. Ms Alibhai-Brown left for Britain in 1972.

In February 2019 she apologised for mixing up two British Asian women who both work in politics. She said Ash Sarkar “may be” the Labour candidate for Chingford and Woodford Green, Faiza Shaheen. She said it was due to the pair’s accents.

Ms Dorries opposed gay marriage in 2013, telling Parliament: “The definition of marriage and the definition of sex is for ordinary and complete sex to have taken place. Same-sex couples cannot meet this requirement.”

She added: “If gay marriage bill takes sex out of marriage could a sister marry a sister to avoid inheritance tax?”

Ms Dorries later apologised, saying in 2018 that voting against gay marriage was “my biggest regret as MP”. She added: “I will regret it all of my life but truly hope that all same sex marriages live happily ever after.”

But the SNP’s culture spokesperson John Nicolson today raised the new Culture Secretary’s “long anti-gay rights voting record” in the Commons adding: “Just as well there are no homosexuals in the arts sector”.

“Sadly, it must be true, history does repeat itself. It will be music next.”

She has repeatedly criticised the BBC – which now comes under her responsibilities as a minister.

In 2012 she suggested ministers should withhold the licence fee payout at a round of negotiations, unless they did more to address discrimination.

She has not had fond words for the BBC itself
(

In October 2014 she wrote: “BBC needs to up its game in political presentation. Dull, boring, male and ageing wig wearing men losing the plot don’t cut it anymore.”

On Nick Watt joining Newsnight, a role Andrew Neil hailed as “excellent”, she retorted: “Or in other words, the BBC recruits straight from The Guardian, again.”

On a Guido Fawkes story about a nurse interviewee worried about PPE being a left-wing activist, she replied: “Would the BBC ever put up a Conservatives activist? Don’t hold your breath…”

On the media more generally

Ms Dorries will be responsible for policy on the media generally – and some won’t be delighted about that.

She tweeted in April 2020: “The nation tuned into daily press briefings and saw journalists at their very left leaning, gotcha worst.

“They failed to adapt and behave appropriately in a crisis. Regarded it as a political event to trip up the gov trying to keep people safe. Big mistake.”

She was not a fan of the No10 press briefings either
(

That didn’t stop Ms Dorries sharing fake news herself, though.

Last year she deleted a tweet in which she shared a doctored video about Labour leader Keir Starmer.

Ms Dorries shared a clip from an anonymous Twitter account which featured a heavily edited video of Mr Starmer during his time as the Director of Public Prosecutions (DPP).

It purported to show him explaining “why he didn’t prosecute grooming gangs”, while in fact he was explaining “wrong assumptions” that had been held in the past.

Conversely, last year she accused the Liverpool Echo of “fake news” over a Covid story – only to be told it had been quoted directly from her own words in Parliament.

At least there was one media outlet she had time to praise recently. In May 2021, when ‘anti-woke’ news channel GB News confirmed its launch date, she tweeted: “This is truly exciting. Cannot wait. Good luck to everyone involved.”