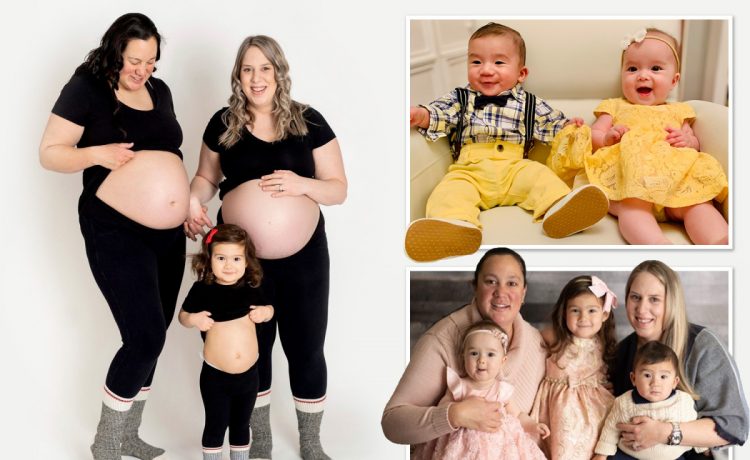 NATASHA Lee, 39, a courier, lives in Ottawa, Canada, with her wife Cara, 29, a service coordinator, and their children Alyssa, three, and ‘twins’ Aria and Easton, one.

Here, the mum-of-three reveals what it was like being pregnant at the same time as her wife.

“I smiled as my daughter Alyssa tried to ‘feed’ my baby bump with a toy bottle, before turning to my wife Cara and doing the same to her.

Cara and I met in May 2012 through mutual friends and started our relationship in November 2013.

Almost immediately we talked about wanting children, and by the following year we both felt ready.

As I was then 33 and I’m 10 years older than Cara, we decided that I should try to get pregnant first.

After five failed attempts at IUI (intrauterine insemination) that we paid for ourselves, using donor sperm, we tried IVF in March 2015, which thankfully was state-funded.

After a heartbreaking failed first attempt, we were thrilled when a second try created five embryos in February 2016.

But then our first three transfers failed and I started to worry it might never happen. So when I finally became pregnant later that year, we were overjoyed.

Alyssa was born in August 2017 and in June 2018 we got married. We were so happy. However, Cara was desperate to have a baby using her own eggs, so a year later she started IVF.

We’d hoped to use the same donor, but no more of his sperm was available, so we picked a new donor.

After her third cycle, Cara sadly suffered an ectopic pregnancy in February 2019 at eight weeks.

While we were preparing for her fourth transfer, in July 2019, I was told I was now at the top of the waiting list for my final embryo transfer.

Cara and I decided that we’d both go for it at the same time, though I worried how she would feel if I got pregnant but she didn’t.

Cara had her transfer and three weeks later I had mine. When her pregnancy test was positive, we were over the moon.

Knowing that the chances of mine working too were relatively small, we were gobsmacked when, two weeks later, we found out I was also pregnant.

We kept the news to ourselves until October, when we announced our double pregnancy to family and friends, who were elated for us.

Being pregnant together was amazing but also strange. I suffered with nausea in the mornings, while Cara’s sickness hit in the evening.

We had all our medical appointments at the same time, and had some lovely moments, touching our bumps together so the babies could feel each other move while Alyssa spoke to them.

We were fortunate to be able to take maternity leave at the same time, too, and we had savings to help us prepare financially.

On March 19, 2020 Cara was induced. It felt incredible to witness Aria being born, especially as I’d gone through it myself with Alyssa.

Helping care for a newborn was strange as I got ever bigger and knew I had my own delivery to come in a few weeks, but luckily Aria was an easy baby.

Cara was by my side when our son Easton was born on April 8, while her parents looked after Aria and Alyssa.

Seeing the babies meet for the first time was wonderful.

Sadly, because of the pandemic, we weren’t able to have the support from family and friends we’d planned, and it was hard caring for two newborns and a toddler while both of us recovered from giving birth and Cara also suffered from mastitis.

We each breastfed the babies we’d carried, and though we could have shared feeding, it just didn’t happen.

Cara is now back at work, and I am also due to return soon.

I love all our babies equally, and honestly don’t feel any closer to Alyssa and Easton than to Aria.

They all have us registered as their mothers on their birth certificates.

Mum shares how she tricks son, 2, into taking medicine & all parents can do it

CLEAN UP YOUR ACT

Alyssa is a brilliant big sister, and when we go out, people often assume the two little ones are twins.

Cara has one more frozen embryo left, and we will make a decision about that when the babies are a bit older.

Although being pregnant at the same time was a rollercoaster, we’d do it again in a heartbeat.”

29% of women under the age of 35 will have a live birth with each IVF cycle.