My summer of love: ‘I’m in search of the perfect fleeting encounter’


A friend of mine told me about this guy she met in the queue at Tesco Metro. They both lunged for the same meatball wrap, and he said: “This is like the part in the film where we fall in love,” which didn’t happen but they did go to the pub and then to a nightclub, where they stood so close to the speakers they could feel the sound in the air as if it were wind. When the lights came on, they headed back to his flat and had great sex, watched by a Simon Cowell cutout he had left over from a party. After climbing out of a window on to the roof of his flat, she stayed until the sky turned from flamingo pink to lilac, to dark blue, and it was time for her to go home and get some sleep.

“I was going to ask for his number but it was so perfect, I told him, ‘If it’s meant to be, I’ll see you out again.’”

“Yeah, he tapped me on the shoulder at a festival a few months later but I had a boyfriend by then, so I ignored him. It was better to leave it at that anyway. Just one perfect night.”

I found my friend’s story deeply frustrating. Why wouldn’t you want to experience more brilliant moments, instead of stewing over the memory of just one? The pandemic only exacerbated this tendency. So little happened that when something did, it felt as though it had to really mean something. Each relationship was strung out and unpacked and reassessed until there was nothing left. There was a guy who regularly sexted me, and I asked him out so many times that his messages stopped. I wondered if me and my ex should give it one more shot, just to be sure. I wondered if my work husband should become my actual husband.

But summer is coming – I can hear it in the music playing out of rolled-down car windows; I can feel it in my thighs, as sweat makes the skin there catch and rub until it’s red raw – and I’m starting to feel very differently about my friend’s story of a perfect one-night stand. Having spent so much of the past year thinking in terms of the future, or dwelling on the past, I want to be – and sorry to sound like someone who writes inspirational statuses on LinkedIn – in the moment. I want to let men leave as freely as I let them arrive, instead of persuading them to stay until we become boring and repetitive; until they know I have to whistle to myself in order to piss; until I know they turn their socks inside out to get another wear out of them. I want a summer of beautiful vignettes. I don’t need to feel disappointed that the guy looking at me over his laptop in my local coffee shop didn’t ask me out, because the butterflies it gave me were enough. I don’t need to try to see that Hinge match again, because the funny anecdote about his mum catching me tiptoeing towards the bathroom was enough.

“The length of a relationship doesn’t dictate its significance,” said my friend of her one-off encounter with the Tesco Metro man. It made me think about someone I kissed at Notting Hill carnival back in 2019. He danced up to me and spun me around. We didn’t really speak because we couldn’t hear each other over the music, and I didn’t really know what he looked like because he had huge sunglasses on. But I fancied him. I remember the slight wetness on his top lip, and the feeling of his hand on my hip. I remember thinking: I don’t think you understand how much this means to me right now.

After a while, he danced away on the current of the crowd he washed in on. I spent the rest of the day looking over my friend’s shoulder, trying to find him again. I wanted to get his number, go for a drink and find out what he does for work. Of course, I never did. Now I like to think that if that same man danced up to me again, I wouldn’t try to find him afterwards. Instead, I would just let him go, knowing he’ll mean more to me that way than if he stayed.

How we met: ‘She gave me strong signs that she wasn’t looking for romance’

‘I never saw my guitar again’: readers on belongings they lost in a breakup

Bennifer is back, but don’t rush to contact your ex, say experts 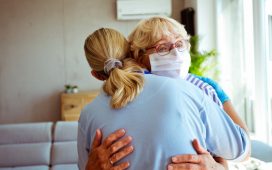 One in four adults have not been hugged in a year, study finds

How we met: ‘He used to annoy me. I was really small and he was always picking me up’

My work has always defined me, but now I am burning out