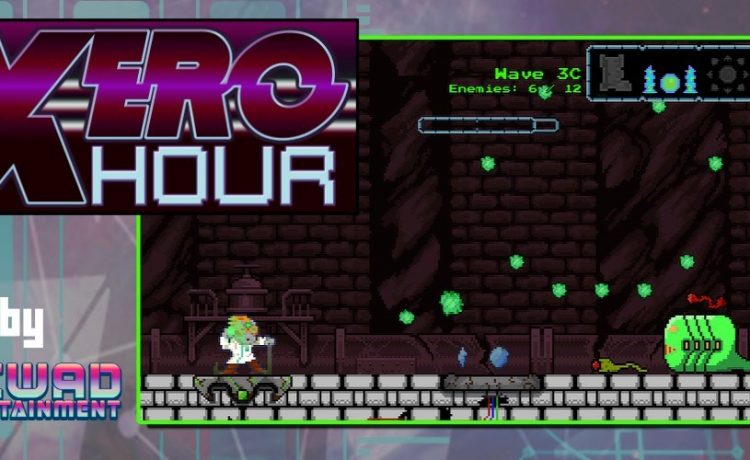 Justin Bender’s love of video games began after receiving a Nintendo in 1989, but it was only during the last decade that he tinkered with creating his own game — one that is now available to play.

Bender, 38, launched Xero Hour on Dec. 17 for mobile devices. The free-to-play game is a two-dimensional action platformer that evokes the style of eight-bit retro games from the era of the Nintendo Entertainment System. Players control Doctor Xero, an alien who has crash-landed on a hostile planet. Xero must collect minerals to create parts for his spaceship while fighting enemies and avoiding obstacles.

The game probably would have been created years ago, Bender explained, but he was busy performing as a guitarist for progressive metal band Into Eternity for seven years and with Third Ion during the last six years. Bender also works from home doing audio production and sound engineering.

“I’ve always had these different passions pulling me in different directions,” the Moose Javian said, noting creating the music and sound effects were the easiest parts of the game.

The music comes from Third Ion’s songs, with each track converted into an eight-bit format. Bender wanted to do this when the members of the group started the “nerdy metal band.” Furthermore, the game’s main character is based on a mascot — a homage to eight-bit video game heroes —the band developed for its album covers.

Members of the band supported Bender using the Doctor Xero mascot as the game’s character, with the members testing the game through development and providing advice along the way.

“They’re the best crew of people I could possibly work with on anything,” he added.

Bender kept the game’s controls simple, especially since it’s being played on mobile devices. However, there is plenty to explore in Xero Hour and even some replayable areas after the first play-through.

The debut of the game has been “pretty crazy,” said Bender. It hasn’t blown up worldwide just yet, but he didn’t expect much attention. That is changing, though, as media have been calling him and gamers in the app store — many of whom he doesn’t know — have been leaving positive reviews.

“It’s been really well-received and that’s just all I can really ask for. People have been pretty stoked about it,” he said.

Most mobile games have in-game monetization schemes that make players feel they won’t get far if they don’t purchase items. Bender added in-app purchases and ads into the game but did so as an afterthought. He only shoe-horned them in based on advice from others in the industry.

In Xero Hour, the ads are optional and won’t punish players if they don’t watch them, while the in-app purchases are for “little do-hickies” to help the character. However, players can beat the game without buying anything.

“Maybe financially it isn’t the best decision, but I’m more so just starting out making games and releasing games. I just really want people to play it,” he said.

Bender might add a few extra levels to the game and charge a few dollars for them. Meanwhile, he has several ideas that he wants to pursue; his goal is to follow up Xero Hour with a new game in a few years.

Bender recommended joining Regina GameDev on the Discord server or its social media pages — such as Twitter —for anyone interested in creating video games and looking for support.

From what he learned while making his game, people should share their work with others earlier to acquire feedback. He didn’t do that until about a year ago but wished he would have. He attributed that hesitation to working in the music world, where musicians don’t share their work until it’s finished.

“Don’t be like me. Do what I’ve heard everybody else say: share your work (and) get feedback,” Bender added. “People aren’t out there to steal your ideas.”