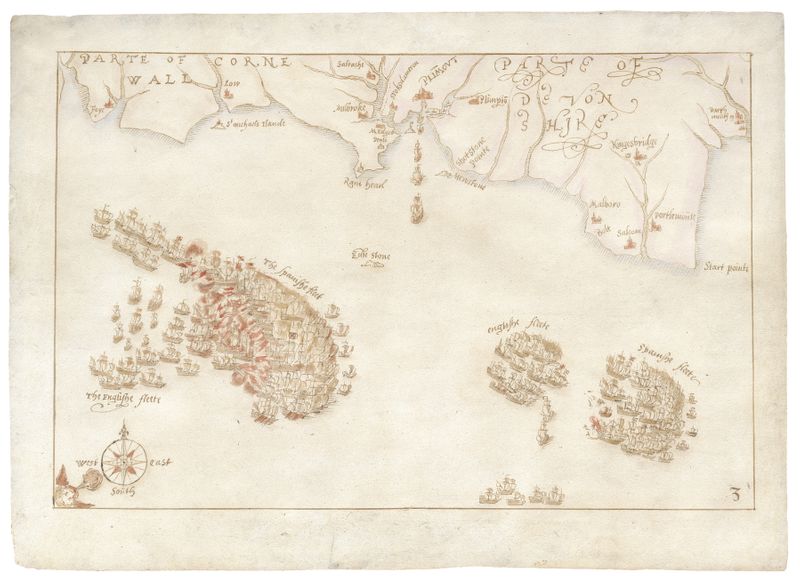 © Reuters. One of “Armada Maps” is seen at the National Museum of the Royal Navy, in Portsmouth

LONDON (Reuters) – A set of 10 hand-drawn, 16th century maps showing the progress of the Spanish Armada that attacked England in 1588, an event that shaped national identity, will remain in the country after a museum raised 600,000 pounds ($824,000) to buy them.

The ink and watercolour maps, thought to be the earliest surviving images of the battles between the fleets of Queen Elizabeth I of England and of Philip II of Spain, had been at risk of export after a private sale last year.

The government placed an export bar on the maps in July, citing the “totemic place in English history” held by the events of 1588, when an armada sent by Spain, the dominant European power of the era, was held off by English ships and destroyed by storms.

The National Museum of the Royal Navy in the southern port city of Portsmouth said it had raised the funds necessary to acquire the maps in eight weeks.

“It was an amazing response from our funding partners and the public, who dug deep in extremely difficult times to save these treasures,” said Dominic Tweddle, the museum’s director general, referring to the COVID-19 pandemic.

The maps were made by an unknown draughtsman, possibly from the Netherlands, and are undated, but are thought to be from the years immediately after 1588.

The voyage of the Spanish Armada stemmed from a confrontation between Catholic Spain, which then ruled much of western Europe and vast territories in the Americas, and Protestant England.

Philip was angered by Elizabeth’s support for Dutch rebels against Spanish power, by her decision to have the Catholic Mary Queen of Scots executed in 1587, and by English privateers attacking Spanish ships bringing treasure from the Americas.

Philip decided to send a fleet to the Netherlands to pick up 30,000 Spanish troops to attack England, but the plan was thwarted by an English attack on the port of Cadiz and another on the fleet itself off the coast of France. The armada was eventually destroyed by storms while sailing around Scotland.

The true impact of those events is a matter of debate, with modern historians disputing a traditional view that they heralded the start of Spain’s decline and England’s rise. Regardless, they did much to forge the idea of England as a plucky island nation with ships that “ruled the waves”.