A MUM has stunned with a throwback picture of her huge pregnancy belly before she gave birth to twins.

Constance Hall has admitted that she was “depressed” and “struggling to survive” shortly before the arrival of five-year-old daughters Rumi and Snow in 2015.

The blogger, from Perth in Australia, took to Facebook to share an old photo of her bump, and explain how carrying not one baby – but two – can take its toll on the body.

Constance – who has three other children – wrote: “So many people thought [this picture] was a beautiful memory, of course it was. To the outside world.

“Inside I was dying. I couldn’t change positions without panting for 5 minutes.

“My depression was through the roof, I cried every day, my two other kids missed their free spirited mum, I couldn’t even get up to answer the door, you can see my swollen lips and fingers but I purposely shadowed my swollen nose and eyes that I could barely open due to fluids in my face.

“The twins were born at 34 weeks, both measuring above average single babies.

“By the end to walk I had to hold my tummy up, lying down on my side all I could hear was my heartbeat struggling to pump the blood around my body, iron injections, daily hospital monitors, messaging my friend and telling her I wanted to die.

“Being laughed at constantly for being so small with such a huge stomach, falling asleep at the red lights.

“And a whole lot of alone time. I am surprised I survived it.”

Constance continued: “The twins are now 5, it does get better, it always gets better.

“You just need to remember that one day you’ll be watching the sun go down at the beach with your mates again and a beer in your hand while your babies swim thinking, ‘thank f**k that’s over’.”

The post has received over 1.3k ‘likes’ and 1.1k comments – with many other women opening up about their own experiences of carrying twins.

One person wrote: “I feel your pain.. reading this was like I wrote it myself.( except your body looks way more beautiful than mine did).”

Another commented: “Thanks for sharing your feelings so openly. My twins are 5 months (3m1w corrected) and god I miss my life and being that carefree do anything kind of mum to my three year old. I keep telling myself it will get easier.”

A third shared: “It’s amazing that our bodies can adapt to such massive changes! You are beautiful here and are now! Pregnancy isn’t all rainbows and butterflies.”

It comes as the mum-of-five previously revealed how she was left fuming after revealing midwives kicked her husband Denim out during the birth of their one-year-old son Raja because “the presence of men was disruptive”.

Brit model, eight, has been dubbed the new ‘most beautiful girl in the world’

In other parenting news, we revealed that you can buy a £15 Dyson vacuum cleaner for kids that actually works.

We also told you how a genius mum has created “baby food bellinis” using peach sachets.

And a mum-to-be was left stunned after her baby flicked V-sign at her in cheeky 4D ultrasound scan. 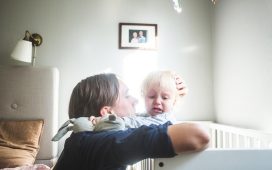