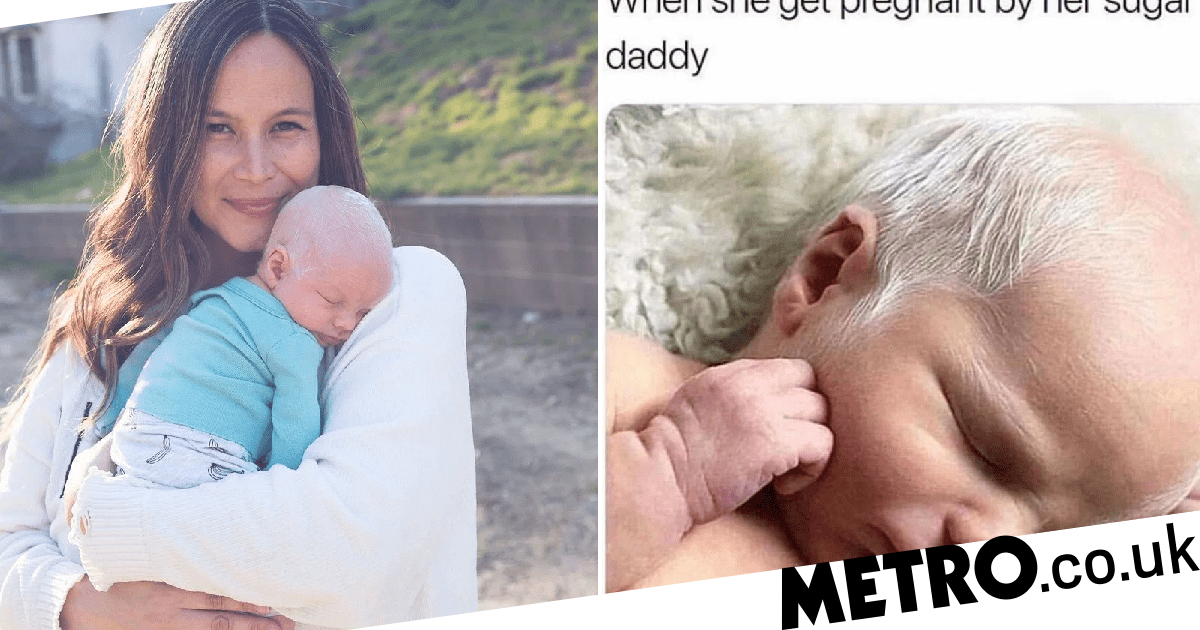 When Patricia Williams shared a photo of her youngest son, Rockwell, she never expected it to spread all over the internet as a meme.

Rockwell has albinism, meaning he was born without pigment in his skin and hair.

His unusual white hair attracted attention from people online, who added text to photos of the baby, reading: ‘When she get pregnant by her sugar daddy’.

At first Patricia and her husband Dale were shocked and upset, and would personally message people who posted the meme to ask them to take the image down.

They soon realised they weren’t able to stop the meme spreading, so now want to use their son’s internet fame to raise awareness of albinism.

The parents of four have another son with albinism, seven-year-old Redd, who helped them learn about albinism before Rockwell’s arrival into the world.

When Redd was born in August 2012, Patricia noticed his eyes were constantly tracking from side to side. A meeting with a genetics specialist and optometrist revealed that Redd had oculocutaneous albinism type one (OCA1), nystagmus (an involuntary movement of the eyes), and strabismus (cross eyes). He is also legally blind.

When Redd began attending school he was often stared at or teased because of the way he looked.

As a result of how both Redd and Rockwell were treated, Patricia and Dale want to raise awareness of albinism and stop those with the condition being bullied.

‘When Redd was born, he came out with a full head of white hair and beautiful blue eyes,’ said Patricia. ‘At the time, we should’ve realised that there was something extra special with him when nurses (who were not our nurses) were coming in to see our ‘baby with the white hair.’

‘My husband and I were both born with blonde hair (as was my oldest son Gage), so seeing our second son with such blonde hair, didn’t strike us as unusual.

‘The first month we had him home I remember three things as being very unique. The first was his hair; it was so white that it would sparkle in the sunlight.

‘Second was the way his eyes were always tracking back and forth. I would try and block his view with my hands to see if he would divert his eyes down, but nothing ever worked.

‘Third was how his blue eyes would sometimes flash red when he was in certain light. This was by far the strangest occurrence, but with all of these things, I figured it was because he was a newborn and that he would eventually grow out of them.

‘When we confirmed that our son had albinism, I was initially shocked and did a lot of crying. I worried about my son’s future and how he would be treated.

‘I was unsure of how our dynamics as a family was going to change now that we had a son who burnt easily in the sun and would most likely be legally blind.

‘I feel like the attention and comments from strangers in public is much more common with our 21-month-old.

‘It’s very unusual to see a baby with white hair and Rockwell’s hair sticks straight up so it’s very noticeable.

‘I never expected my son’s photos to go viral on social media. Once I started gaining more and more followers, I started getting asked so many questions and realised that albinism is still very unfamiliar to people.

‘Personal points of views were very misguided and based on what people saw in movies. I realised I had a rare and unique opportunity to educate and spread awareness, by means of social media and by sharing photos of our family.’

Redd has had laser eye surgery to correct his strabismus and has recently moved from a private school for the blind to a public school.

His parents hope he can tackle some of the misconceptions around albinism.

‘People with albinism are just like everyone else,’ Patricia says. ‘One of the biggest misconceptions is that they have red eyes. Because their eyes lack pigment, it’s most common for them to have very light blue eyes.

‘Another large misconception with albinism is that he or she may have a mental disability, when this has nothing at all to do with albinism.

‘The scariest misconception is the way they are treated in certain parts of Africa, particularly Tanzania, where many of them are attacked and/or killed for their body parts.

‘It was sickening to learn that someone just like our Redd and Rockwell, has to fear for their life of being hunted.’

MORE: Why you should stop setting New Year’s resolutions to exercise and start working out now

MORE: Mum with dementia sells handmade Christmas cards and paper flowers to people around the world

MORE: Mum creates a magical hideaway for her daughter in the dead space in her loft

READ  Woman mortified after she walked around Tesco with huge chocolate smear on her bum
Share on FacebookShare on TwitterShare on PinterestShare on Reddit
newsgrooveNovember 29, 2019