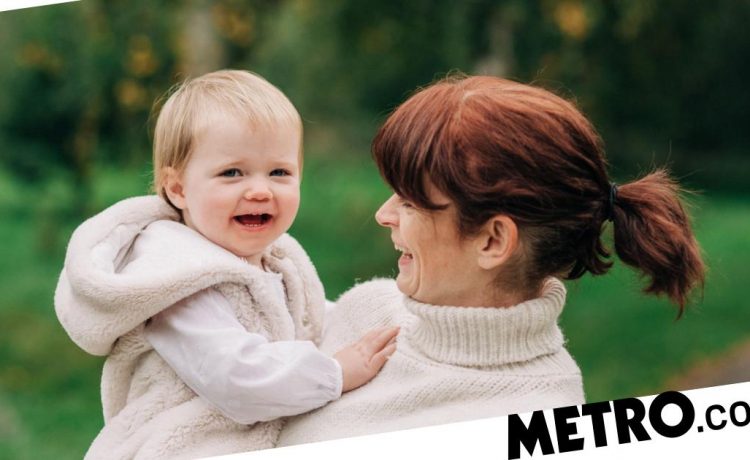 Now, mum to two-year-old Daisy, Mel, from West Didsbury, Manchester, has decided to launch a new career coaching women on how to follow her example.

She now runs Choosing Solo and has helped more than 150 other women questioning whether to raise a child on their own.

Mel, who works as a HR manager, said: ‘When I was 37, I had been single for quite a long time and started to worry that if I didn’t meet someone soon, I might miss out on the opportunity to be a mum.

‘I started questioning what my options were; I didn’t know anyone personally who had gone down that route so I phone a fertility clinic, booked an appointment and it went from there.

‘I was thinking about holding out to see if I meet someone but I thought I would be doing it for the wrong reason and I didn’t want to settle for someone who I couldn’t see myself being with long term.’

Mel had always assumed that she would become a mum at some point but as she got older and hadn’t met the one, she felt she had to take things into her own hands.

Her last long-term relationship ended over 12 years ago and since then, she has struggled to find love.

After spending seven years living and working around the world, she moved back to Manchester and in 2015 she began her IVF journey.

She added: ‘Whilst I was abroad with my job, I went on plenty of dates but I never met the right person. A lot of my friends had met someone but I just didn’t find anyone I had a strong connection with.

‘As you get older, the pressure starts to get so much that it can lead you to make bad choices and I had made plenty; I just really wanted to meet someone to have that family but realised that would be the wrong decision.

‘I always presumed I would be a mum, I didn’t question it I just assumed it would happen. It was only in my mid 30s I started to think, is this going to happen for me.

‘I strongly believe in creating your own fairytale and your own ‘happily ever after’ and that doesn’t always have to be in a relationship; there is far too much societal pressure on women to meet the right man and have a baby.’

After two attempts at fertility treatment, she fell pregnant with her daughter Daisy.

She said: ‘I didn’t want to make the wrong decision and have a baby with someone just because I was running out of time; research shows that children are more impacted by parenting stress which often occurs through divorce than a secure one parent relationship.’

Mel faced some judgement but has never regretted her choice to become a mum through sperm donation.

She said: ‘When I first began telling people about my decision, I had a few people who didn’t understand and questioned my decision, suggesting I should wait longer to meet a partner, but after explaining it to them, they understood and supported me.

‘Daisy has an incredible family around her and as she grows up, I will continue to talk to her about diverse families, donor conception and explain why she only has a mum.

‘The number of women who became solo mums in the last few years has significantly risen and continues to do so, so it’s not as uncommon as it was in the past.

‘When she was born in February 2018, it was amazing to finally have something that I had wanted for so long and it’s very empowering that I got to make that decision.’

Now Mel uses her own experiences to help women in a similar situation.

She added: ‘I’ve started my own coaching business and have coached more than 150 women looking to do the same thing; it’s good women have a choice so they don’t miss out and I am passionate about ensuring they are empowered to understand the options available to them.

‘We cover some of the emotional aspects of the process, as well as the process itself and I have had a few women who have messaged me letting me know they are now pregnant.’


MORE : Mum shares easy recipe for making your own Baileys at home for £5 a bottle


MORE : Couple uncovers 66 bottles of 100-year-old whisky hidden in the walls of their home

READ  Picturebook legend Oliver Jeffers: 'I've got my wife's bite marks tattooed on my finger'
Share on FacebookShare on TwitterShare on PinterestShare on Reddit
newsgrooveDecember 1, 2020