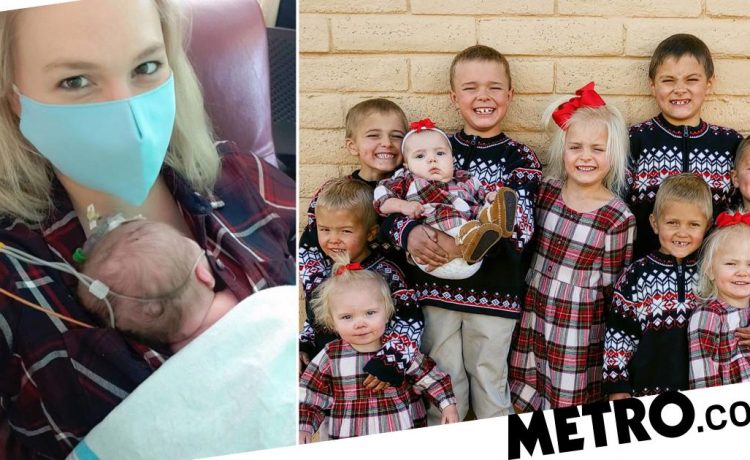 A mum who has just given birth to her 11th baby says she adores being a mother and wants to homeschool all of her children.

Courtney Rogers, 36, delivered her newest baby – Caris Audrey – by emergency C-section in November, but admits that she hopes to have a 12th child in the future.

Living in Santa Fe County, New Mexico, USA, the mum has rarely been without a bump or a newborn in the 13 years since marrying church pastor husband Chris Rogers.

After the stressful delivery of Caris – her biggest ever baby, at 9lb 3oz – the newborn needed to spend 15 days in the newborn intensive care unit.

‘I was more scared for Caris than for any of her brothers and sisters,’ says Courtney.

‘That was the scariest part as you just want to make sure your baby is alright.’

But now Caris is happily home, bonding with her six brothers and four sisters, all aged between 10 and one, and Courtney is already thinking of adding to her brood – although this time she would like a break to recover first.

‘We’ll probably wait a year or two to try,’ she says.

However, she says the family have faced some online criticism, with people questioning how the couple afford to care for their children, or how they manage to give them all enough attention.

‘They don’t know how much income we have, or that I’ve never sent the kids to day care or school,’ she explains.

‘I love having babies and seeing the kids bonding, having fun and playing together.

‘Ever since I became a mother, it’s just become my life and I enjoy it and love every minute.

‘Even though I have so many kids, I’m the type who will be sad when I have my last one and want to cherish each moment.’

Now the clan is adjusting well to being a family of 13 and settling back into an everyday routine, with the parents home-educating all the children over four or five years old – and working on their small farm.

‘We do plan on homeschooling all of them, so we haven’t been affected at all by the school closures in the pandemic,’ says Courtney.

‘They get a lot of time outdoors too and this year we want to grow our farm a little bit more.

‘For the last two to three years, we do school all year. We do it in the summer and on Saturday and Sunday if we have to.

Courtney began getting anxious about baby number 11 when she was eight days overdue. Other than Clay who was 12 days late, all her children had been born on or close to their due dates.

So, Chris drove her to hospital in Albuquerque, where she was induced at around 8pm that evening.

Eight hours later, at 4am, Courtney was fully dilated, but she knew from her past births that something was not right.

‘I’d had an epidural so I didn’t have a lot of pain, but I could also tell that the baby wasn’t down there to push because, of course, I know what that feels like,’ she says.

‘They told me to start pushing as I was 10cm dilated. I kept telling the midwife “She’s not down there, I don’t feel anything”, but I pushed anyway for about 40-45 minutes.

‘That’s when things went bad and we had to rush to have an emergency C-section.

‘The baby wasn’t in the birth canal and we couldn’t get her in there.

‘She started getting into distress and they said she wasn’t getting oxygen.

‘I knew the C-section had to happen but at the same time I thought, “I didn’t plan this at all.”‘

At 5.30am, Caris was delivered and immediately whisked away to intensive care to be given oxygen via a ventilator.

She also needed to be tested to see if she had brain damage, as medics believed the baby had been starved of oxygen for several minutes during the birth – potentially due to her positioning.

‘Thankfully they didn’t really find any damage,’ says Courtney. ‘They just saw some small areas of concern and think hopefully, with her being so young, the areas of the brain will grow over that.

‘They said the worst-case scenario would be that she might have some delays.

‘Of course, at this age, you don’t know – it could be motor delays, it could be speech, or she could be absolutely fine.

‘It’s just one of those things you won’t know until time goes on.’

After a few days, Caris stopped needing a high amount of oxygen, and after 15 days – while still on a very low flow of oxygen delivered through a nasal tube – she was allowed home, where she was greeted by her excited siblings.

‘It was chaos,’ says Courtney. ‘They were so excited to meet her and excited for Christmas, but they were also a bit confused by the oxygen tubes she had.’

Despite her dramatic start in life, Caris is proving a relaxed new addition to the family.

‘She’s an easy baby,’ says Courtney. ‘She’s very chilled out and eats well and sleeps through the night.

‘If she fusses, she relaxes when you pick her up.’

Caris is particularly precious to Courtney because, despite being born nine days late, she was actually due on November 19 – which is a special date.

‘I had a miscarriage five years ago this coming May,’ explains Courtney. ‘This baby would have been due on or very close to the same date Caris was due.

‘They were due at exactly the same time, so it was quite a meaningful birth for me.’

Although she and Chris love having such a big family, in some ways it has come as a surprise to Courtney.

‘I don’t know why I like it so much – I don’t think I ever imagined having this many children when we got married.

‘I just knew that I wanted children and when I became a mother, I realised how much I loved it.’

READ  A small nail-trimming injury leads to blood, sweat and tears – for all except the victim
Share on FacebookShare on TwitterShare on PinterestShare on Reddit
newsgrooveJanuary 27, 2021