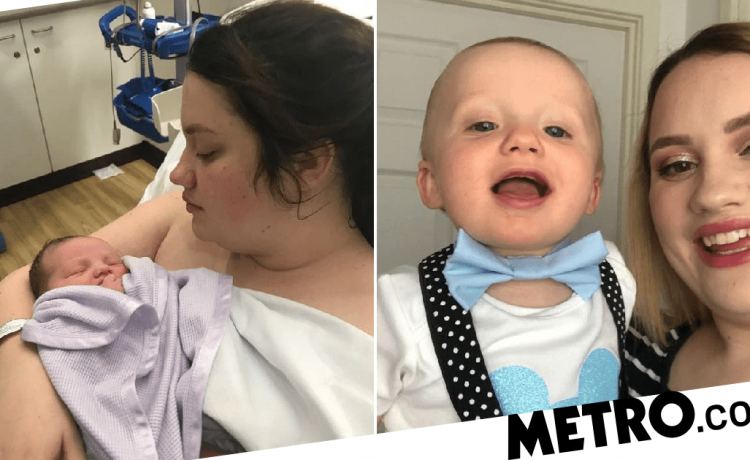 After a normal first pregnancy, Misha Clarke’s waters broke 13 days before her due date.

There were no signs she was going to have a difficult birth – but it took two days of labour before her baby was born, leaving her with a third-degree tear that took months to heal and still causes her some pain now.

Misha, 21, from Cumbria, wants to speak out to show talking about vaginal tearing shouldn’t be taboo and to let mums-to-be know that there are things to do to reduce the risk of it happening.

While there’s no guaranteed way to prevent tearing during delivery, there are preventative methods, such as regular perineal massage, which should be carried out from week 34 of pregnancy onwards, at least three times a week.

Misha tells Metro.co.uk: ‘I want to help educate other women on what they can do to prevent tearing during childbirth and help them to understand that what they might experience isn’t something to be ashamed or embarrassed about.

‘The underlying issue is that women aren’t properly educated about their own bodies or what they might go through physically both during and after childbirth.

‘I understand that many women feel uncomfortable discussing intimate issues, such as perineal trauma, and so I want to put myself out there to help break down that taboo. If I’d had read a story like mine a few years ago, I’d have felt far less scared and alone going through these experiences as a first-time mum.’

Misha fell pregnant back in October 2017 and says her pregnancy was normal with just a little morning sickness and heart burn occasionally bothering her.

She was preparing to give birth in early August 2018 but on 24 July, 13 days before her due date, her waters broke.

She headed to her local hospital to be examined and although she was already experiencing contractions, she wasn’t dialted enough.

Over the next two days, she kept heading back and going home as her labour was not progressing.

Evenutally, she was admitted and induced as they needed to move labour along.

She was also given an epidural to reduce the pain.

Eventually, over 40 hours after her waters broke, she started to push but again it was slow to progress.

She says: ‘I was pushing and pushing and getting really exhausted. It went on for like an hour and 20 minutes. Because I had an epidural, I didn’t feel the tear at the time and then our baby Cain arrived and we were so overwhelmed.

‘But when they went to examine me, they said there was a tear and the midwife tried to stitch it up but couldn’t, so she got a more senior midwife but she couldn’t and they had to call a doctor.’

She also suffered deep lacerations to the inside of the vaginal wall, periurethral tears (at the top of the vagina, near the urethra) and her labia tore

Misha says: ‘They had to put surgical gowns on and give me anaestheic and it took about an hour to stitch up.

‘My partner was holding the baby with skin and skin, while my mum held my hand. It was quite uncomfortable.’

In total, she needed seven stitches to repair the perineum and although the procedure went well, she was in a lot of pain for the first few months of motherhood.

She says: ‘I never imagined the pain there would be afterwards. It was just this horrible burning. I could barely sit down and it was uncomfortable to walk. It would only stop hurting when I stood still.

‘I was trying to breastfeed and it was hard to sit with him. I bought a pillow to try and take the pressure off.

‘It was about three months before it started to ease but I do still get some pain there now, even nearly two years later.

‘It was a hard a recovery but I tried not to let it take away from welcoming my son – I would think it was worth it to have him.’

Although Misha had researched tearing before giving birth and knew about perineal massage, she wasn’t fully aware of its importance. She struggled to do it herself at 34 weeks and her partner worked away six days a week but she says she would have tried harder to do it if she had understood.

She now wants to raise awareness for other women as she feels that many still struggle to talk about it.

Misha has joined forces with My Expert Midwife as part of their #PowerToThePerineum campaign, which aims to educate and empower women to have a more positive birth experience.

According to My Expert Midwife research, about 85% of women will sustain some form of perineal trauma during childbirth. Around 1% of women experience a more serious third or fourth degree tear, like Misha.

However, research shows that perineal massage from 34 weeks can be effective at reducing the extent of tearing during childbirth.

After various clinical studies, the NHS recommends the practice as it gradually softens and stretches the vagina and area around it in preparation for birth.

Misha says: ‘I didn’t know how much perineal massage could help before I gave birth. If I had known that, I would have given it a shot and could have had less of a tear.

‘It’s important for women to know the ins and outs of it. It is a taboo subject but giving birth is something that happens to lots of women and it shouldn’t be sugarcoated. We should be talking about it rawly so women know what to expect and what they can do.’

Misha gave birth to her second child Aurora eight months ago and although she went through another long labour and tear, she says it was not as bad and the recovery was much better.

To find out more information about perineal massage or the #PowerToThePerineum campaign, visit their website or join the conversation online on Instagram @my_expertmidwife and Facebook @myexpertmidwife.

MORE: Mum lets teenage son give her a makeover to support his love for drag

READ  I’m out of favour with my son
Share on FacebookShare on TwitterShare on PinterestShare on Reddit
newsgrooveJuly 6, 2020