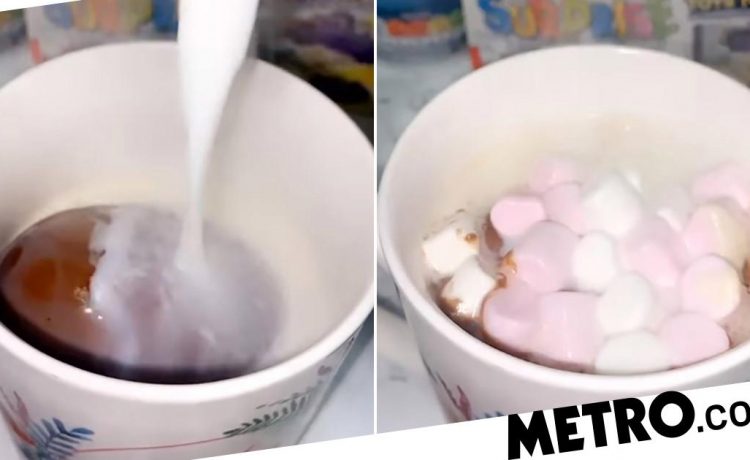 Prepare to watch this video at least 17 times.

The satisfying clip – shared by mum Charley Gumble – shows a game-changing hack whereby you use a Kinder Surprise egg to make a hot chocolate bomb.

The 26-year-old from Essex had the genius idea to simply add steaming milk to allow the chocolate egg to melt and reveal the mini marshmallows hidden inside.

While you can’t buy Kinder eggs that have marshmallows stored inside, what you can do, as Charley does, is take the egg apart and put your own mini marshmallows and hot chocolate powder within the chocolate shell.

Alternatively, there are hot chocolate bombs you can buy but Charley’s £4 Tesco hack is pretty cheap and cheerful.

On the million-strong Facebook group, Charley advises: ‘You just open the [chocolate egg] up and take the toy out, filling it with marshmallows.

‘I added a spoon full of hot chocolate as well then melted the edge a tiny bit and put it back together. Great to make with the kids. Also could add a spoon full Nutella.’

We spoke to Charley who said she was inspired by other hot chocolate bombs to make her own.

She said to Metro.co.uk: ‘Everyone is making and selling the hot chocolate bombs and it just occured to me my little girl loves Kinder eggs.

‘We had some in the cupboard. And I just thought I’d l try my own as I didn’t have the moulds and it was a success.’

More than 3,000 people also thought it was a success, and tagged their loved ones on the Facebook post saying they’d be trying this out.

Some said you can add whichever type of marshmallows you like including those suitable for vegans and vegetarians.

An easy and clever hack.

READ  Best virtual retreats for a dose of at-home wellness
Share on FacebookShare on TwitterShare on PinterestShare on Reddit
newsgrooveNovember 22, 2020