Heading back to school after a long break can be difficult for kids, but one mum’s creativity helped her son feel less anxious.

Kat Gurnett sewed ‘kisses’ onto her five-year-old son’s jumper, to help him feel better about his return to the classroom.

Last week, little Davey Gurnett returned to his primary school with two navy crosses on the sleeve of his red school jumper – as he began his first week in Year 1.

The 35-year-old mum told her youngster that he could kiss or rub the embroidery if he started to miss his family, and doing so would ‘send a little kiss back home.’

Kat, from Hemel Hempstead, saw other mums coming up with brilliant ideas on social media to help children on their first day back, but wanted something Davey would keep on him all day.

She says: ‘It’s a very emotional time, some kids find it easy, walk in and don’t look back. But some find it a bit more difficult which is heartbreaking for the parent.

‘I saw things online from other mums about how their kids felt anxious going back to school.

‘Some were giving their kids bracelets but I didn’t want to give Davey anything he could lose because he could then spend the day even more upset.

‘I explained to him that if he missed us at all he could kiss, rub or hug the kisses and it would send a little kiss to us.’

Thankfully, the creative trick worked a treat – as when Kat picked up Davey from school, he asked her if she felt his kisses.

She adds: ‘It was as much for me as it was for him.

‘I felt better knowing he had that to comfort him.’

Davey’s health issues meant that going back to school was a big deal for both mother and son this year.

However, Kat knows that fellow parents might also be struggling with the same problem – so shared her thoughtful idea, to help others heading back this week.


MORE : Mum creates incredible lunchboxes for her son – with alien and dinosaur scenes


MORE : As a working mum, I am tired of adverts portraying women as stupid 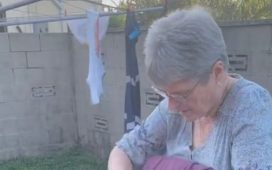