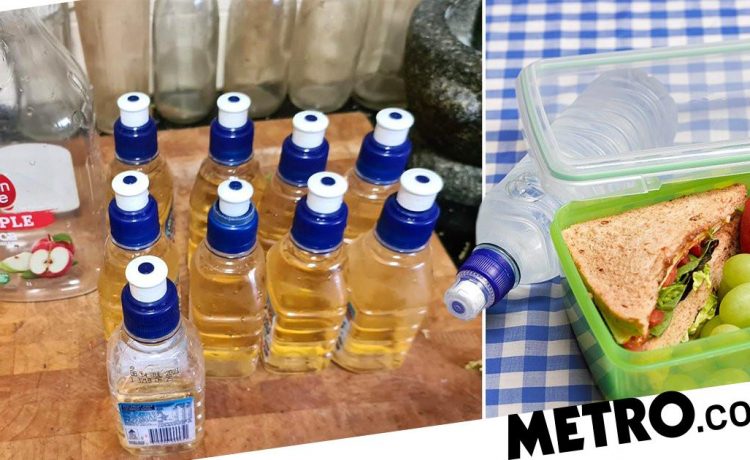 Sending kids to school with a packed lunch every day can quickly add up, especially if you’re buying little portioned packets.

One mum highlighted that it’s a lot pricier to buy juice drinks for kids rather than just taking the bottles and just keep refilling them from a large bottle.

While it might seem like a simple and obvious idea, other parents said that it’s something they hadn’t done before.

The Australian woman, called Rachel, posted on Facebook, said she was always finding the empty bottles from juice pops around her house and she decided to set some aside.

She said: ‘Budget tip for mums. Instead of buying endless juice pop tops, save the empty pop tops and buy the big two-litre juice in any flavour your kid likes.

‘One two litre juice makes eight and a half pop tops, and it’s half the price of a new six-pack.’

To encourage her kids to keep reusing the bottles, they can only have a new one if they return an old bottle.

‘Now, if the kids do not put them in the basket on the bench, then I will not re-fill them and they do not get their drinks till they’re all found,’ she said.

She said she’s also started doing the same with pretzels and other snacks, putting them in containers, rather than giving them little individual bags all the time.

Others admitted they’d been splashing out on the lunchbox friendly packaging but realised it wasn’t necessary after this post.

‘Thanks so much for the idea, I’m definitely going to try this,’ one woman posted.

‘I have just started doing this and it’s so much cheaper,’ another added.

READ  Mums rave over £6.99 Aldi plate that helps fussy toddlers finish their dinner
Share on FacebookShare on TwitterShare on PinterestShare on Reddit
newsgrooveDecember 24, 2020