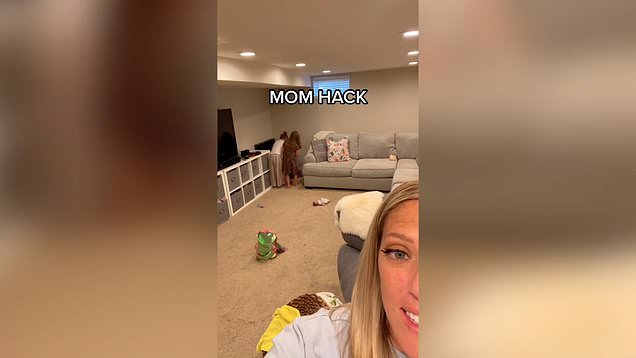 While kids love to take all their toys out, they usually aren’t so keen about putting them all away – leaving parents feeling like they’re forever tidying up.

But one mum has found a way to get her kids to help.

TikTok user @Fawn_design explains how she created a game where she assigns something in the room as the star object in her head.

Her kids have to put everything away for her to reveal which of them put that particular thing in the right place, winning themselves a prize.

She said she was inspired by fellow parent @Mollythemom to try it out.

In the clip, her kids are happily tidying behind her as she talks to the camera.

The mum said: ‘If you want your kids to happily put things away and for the load to be equally shared – because usually it’s consistently the same person doing all the cleaning – pick a mystery item and whoever picks that item up and puts it away in the right spot wins a prize.’

The video has been viewed over 2.7 million times and some loved the idea.

‘This is such a good idea that I don’t even have kids but I shared it to my faves,’ someone else said.

Others though argued that it teaches kids they should only do things with a reward.

‘You’re teaching them they get a reward for doing what they should be doing anyway,’ one wrote.

But other commenters jumped to defend the idea. ‘It’s called positive reinforcement and is more effective than punishment,’ someone wrote in response.

Meanwhile, other parents shared their own takes.

‘Or you say pick up 5 things. This helps with Math skills,’ a mum said.


MORE : Man becomes guardian to little brother after both his mum and dad die within 12 months


MORE : Eyelash curler hacks you can use in your beauty routine – that aren’t for your lashes