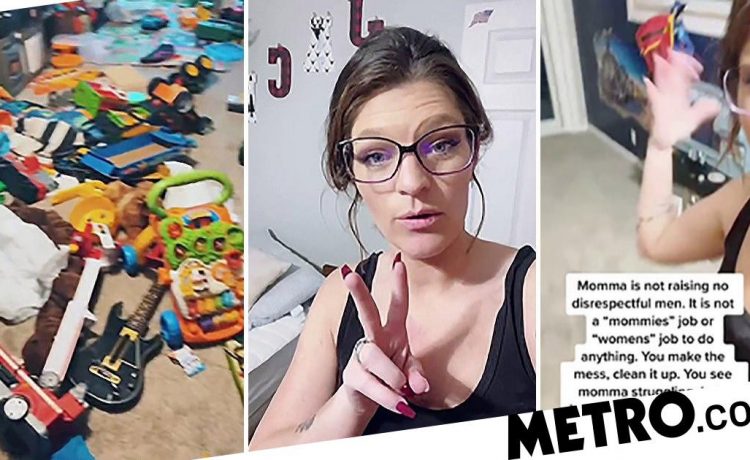 Parents have different ways of disciplining their children, from time-outs to naughty corners.

It’s a personal choice – but one woman is dividing opinions after sharing how she taught her son a lesson on TikTok.

User @tabathamarie shared a video to the social media app explaining that her five-year-old son had refused to clean his room.

Tabatha captioned the video: ‘I hated seeing the look on his face when he seen his room. It hurt me just as much, but my babies will not be disrespectful.’

In it, she told viewers that she had asked her son two days in a row to tidy his room, but he replied: ‘no you clean it mommy.’

The video then turned to her throwing his toys into bin bags while the caption read: ‘Trash here we come.’

She added: ‘Momma is not raising disrespectful men. It is not a ‘mommies’ job or a ‘womens’ job to do anything (sic).

‘You make the mess, clean it up. You see momma struggling, help her. Don’t sit there and let a woman struggle periodt (sic).

‘My babies will learn this quickly.’

Since Tabitha posted the video, it has received over 3.4 million views and 23,000 comments.

Understandably, there was heated debate in the comment section, with some praising her technique.

‘I’m 18 and my mom did that when I was probably 10 because I refused. And after that week with no toys I learned real fast to clean after myself,’ wrote one user.

‘How my kids will be raised,’ said another.

However, others criticised the move.

‘Judging by the toys, he’s too young for that entire responsibility. If you want it clean start by helping him and then work up to him doing it alone,’ wrote one viewer.

‘My mom used to do something similar at a very similar age. It traumatised me forever and in adult life cleaning is still an extremely stressful task,’ added another.

Tabatha joined in the comments and told her followers that her son’s toys were actually in the basement and that her method was to teach him to ‘not disrespect a women in anyway shape or form (sic).’

Then in a later video, she confirmed that the toys will remain in the basement as a lesson and her son can earn them back.


MORE : Kinder chocolate toasties are trending on TikTok and they look delicious


MORE : Mac and cheese version of TikTok pasta recipe has lots of hidden veg and is perfect for kids

READ  Mum turns old TV cabinet into play kitchen for her daughter for £30
Share on FacebookShare on TwitterShare on PinterestShare on Reddit
newsgrooveApril 18, 2021