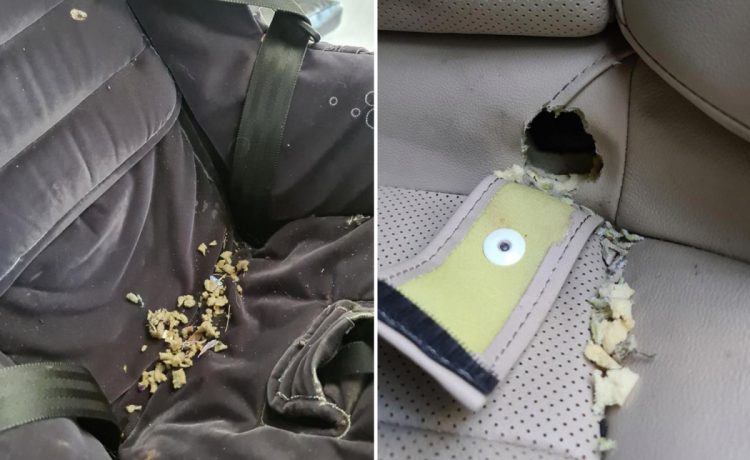 For the best part of a week, the mum couldn’t understand what was causing the foul smell in her car – but as busy mum-of-two, it wasn’t at the forefront of her mind.

Speaking to 7News, the Canberra-based mum explained how she hadn’t used her car a few days at the start of May when her two children had fallen ill.

But after spotting the foam from the inside of the kids’ car seats everywhere, the mum also discovered other bits of unexplained rubbish on the floor – including a brand of lolly she’d never purchased before.

It was in that moment that the single mum realised she had a RAT living in her car and she’d been breathing in the smell of its urine and faeces.

“You hear these horror stories and now I’m becoming one,” Rachelle said.

Naturally, the mum went into panic mode and turned the car upside down looking for the intruder.

In the process, she stripped the car seats – which were drenched in urine – and discovered a tunnel the rodent had made in the back seat which led to the boot.

On further investigation, Rachelle found the rat had helpfully pooed all over the spare tire in her boot – but more alarmingly, it had also started chewing through her kids’ seat belts.

After giving the car the thorough deep clean, the mum thought she’d dealt with the unwanted intruder – that is, until her daughter heard it squeaking when they were running errands recently.

However, the mum isn’t sure where she picked up the rat and warned other parents to be aware of the dangers as rats can allegedly fit into spaces which are half their body size.

Two lonely mistresses claim they are the hidden victims of lockdown

Can YOU spot a fish hiding among the octopuses in this tricky brainteaser?

Most Brits can’t name all parts of the vulva – can YOU?

For more parenting stories, this thrifty mum shared her easy meal planner which has saved her family-of-five £360 a month on food.

And this mum was in hysterics at ‘sweet note’ her son left his dad – which accuses him of trying to KILL him by unplugging his fan.

Plus this thrifty mum shared how she bagged £30 Morrisons shop for just £3 after struggling to make ends meet before payday.