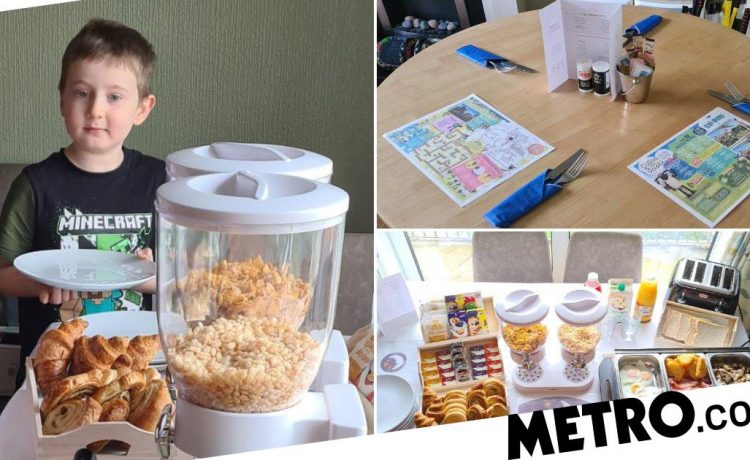 We all have things we’ve missed since lockdown last year.

For 35-year-old Stacey Brooks’ kids, nothing has been found wanting more than the good old Premier Inn.

The mum, from Newport, South Wales, noticed her three children needed a little lift, so decided to recreate their favourite activity: Going to a breakfast buffet.

Stacey was initially stunned to learn it was the breakfast buffet served in Premier Inn hotels that her children missed most about lockdown. It was her youngest son Harry, seven, who voiced his longing for mini croissants and jars of jam.

The family often frequent the chain when they visit attractions around the UK, and enjoy waking up in the morning and picking from each station, getting cooked and continental foods to pile their plates high.

So for a bit of fun, Stacey recreated the set-up. She did so perfectly, spending £30 on a lookalike serving tray from B&M Bargains and purchasing wooden trays from Amazon to complete the look.

She even stuck Premier Inn stickers on her children’s bedroom doors to kick off the fun experience and make a day out of it.

Harry, and Stacey’s other children Megan, 17, and Josh, nine, loved the treat and took turns serving themselves from the buffet.

Stacey said: ‘We don’t venture abroad so we stay at Premier Inns a few times throughout the year.

‘I pick places that have interesting things to do or somewhere we haven’t visited before, and Premier Inns are usually very close to these attractions. The kids aren’t seeing friends at all and it’s very limited with family.

‘Their school has closed, their clubs and groups have finished up, so this was just to keep everybody’s spirits up and for them to have something to look forward to.’

Stacey’s dad helped print the signs, placemats, and menus from the Premier Inn website, and everything else was bought from either B&M or Amazon.

‘I set up everything the night before so all I had to do in the morning was add the freshly cooked ingredients to the trays,’ she adds.

After he mum shared the finished product on Facebook, she received an influx of comments from people calling it a ‘brilliant’ idea.

One person wrote: ‘I love this. I’m a waitress at a Beefeater and this has given our team a little laugh for today. Thank you. Enjoy, looks delish.’

Stacey added: ‘I absolutely love doing things like this for my children. I have created numerous themed celebrations, including a rainbow party, SpongeBob party, movie nights, a funfair and Grinch party since March last year.

‘I like to get the details just right when I do a theme as I think if you are going to do a job then it needs to be done well.’

Not a bad idea for anyone feeling burned out by home schooling who wants to have a little fun as a family.

READ  Exhausted dad pokes fun at endless list of tasks on daughter’s school newsletter by writing his own hilarious version
Share on FacebookShare on TwitterShare on PinterestShare on Reddit
newsgrooveJanuary 14, 2021