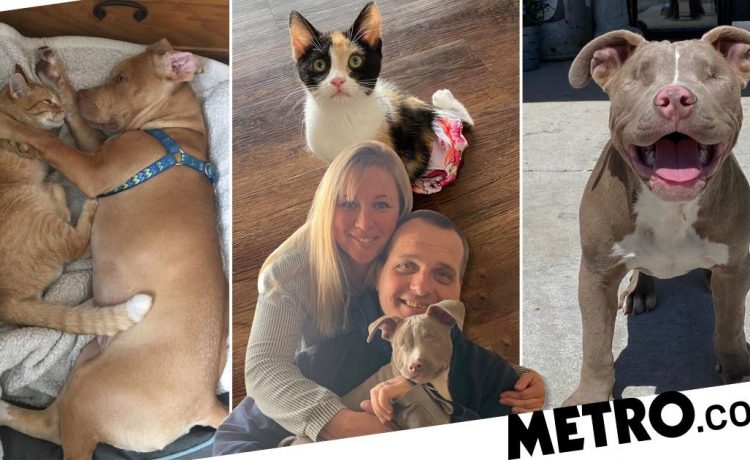 Nicole Wulfekuhle, 50, hated the idea of animals being euthanised – so she took as many as she could into her home.

Now, the mum-of-three has 26 pets at her home in Minnesota, US.

The sanctuary started in 2016 when Nicole went to collect her two cats from a boarding cattery and spotted a blind kitten in need of fostering, bringing him home too.

She soon started taking more vulnerable pets in and registered her home as a non-profit sanctuary.

She named it Lennon’s Legacy after a blind and deaf Indian street dog. He sadly had a seizure and passed away shortly after arriving in the US, but made a mark on the family.

Nicole currently cares for cat Belle, who needs a wheelchair, as well as 20 other cats, two dogs and two goats.

She said: ‘Many of our animals have run out of options or are at risk of euthanasia.

‘Our mission is to care for them and provide them with a loving home, raise awareness of the beauty of special needs fur babies and to spread happiness, joy and smiles.’

One of their latest family members is Jude, a blind puppy with bowed legs, also known as Blount’s Disease.

He was found malnourished, dehydrated and with physical issues including ruptured eyes – which are suspected to be due to trauma.

After four weeks in hospital and double eye removal surgery, Nicole adopted him.

He arrived in March 2020 and has been thriving ever since – thanks to his new family.

Nicole, who is originally from Newport, Wales, said: ‘Jude is a happy, smart little boy who has no idea that he is blind.

‘He navigates the house and garden really well, using his ears and nose as his eyes.

‘He’s one of the most affectionate dogs I have ever met.

‘Jude had a rough start to life and was neglected at best and, at worst, abused.

‘I made him a promise that he will never know another day without love and his life will matter.

‘If he makes just one person smile each day then his life has meaning and purpose – and he certainly makes us smile.’

Her experience with other animals has helped her train Jude using sound.

For example, she will say the word ‘harness’ if she is going to put his harness on, which helps him understand what different objects feel like.

She said: ‘He’s really good at navigating around.

‘I say ‘careful’ if he’s going to run into something, which isn’t often, but he already knows how to sit, touch, kiss and leave.

‘He uses his other senses to make up for his loss of sight – particularly hearing, smell and energy perception.

‘He doesn’t recognise he has any physical challenges, so the only challenge he has is not being able to interpret behaviours of the other dogs.

‘He can be stubborn and determined and naughty – just like any puppy – but he’s very loving.

‘Jude just loves to cuddle and be fun and cheeky.’

Nicole also had a blind dog named Dexter, who sadly passed away in July 2019.

Dexter had been particularly close to ginger moggy Oscar, who quickly took Jude under his wing when he arrived at the sanctuary.

She said: ‘After Dexter died, I said that I would only adopt another special needs pup.

‘Jude had been rescued by some of the amazing people who had a role in rescuing Dexter – it felt like he had sent Jude to us.’

She has the full support of husband, Dean, 48.

Nicole also helps to care for Dean as he is a quadriplegic after being paralysed in a car accident in 1993. They met him online and she moved to the US to be with him in 2014.

‘He survived a seven times rollover car accident that left him paralysed from the neck down – he’s amazing.’

Together, the two are determined to provide a happy home for their furry friends – including little Jude.

She added: ‘Jude is doing great and gets on well with all the animals.

‘We plan to continue loving and spoiling him and supporting him to bring happiness, smiles and joy to others.’


MORE : You can win a once-in-a-lifetime private tour of Edinburgh Zoo, including feeding time with animals