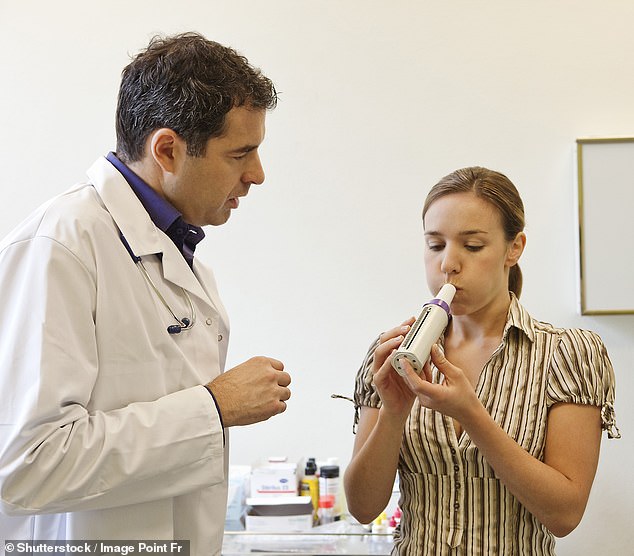 Multiple sclerosis could be diagnosed with a breath test in the near future, scientists hope.

Called volatile organic compounds (VOCs), some types are able to indicate other diseases such as cancer.

Experts hope VOCs will help GPs spot MS quicker when a patient visits with the early symptoms of the progressive condition.

Currently, diagnoses can take a long time and involve tests such as MRI scans which can be distressing.

Multiple sclerosis could be diagnosed with a breath test in the future, scientists hope, by measuring VOCs that indicate disease

However, she added: ‘MS researchers today are achieving some incredible things – and these findings, whilst early, are very encouraging.

‘There are over 100,000 people with MS in the UK and we often hear that the path to diagnosis is an incredibly stressful time.

‘The techniques used for diagnosis are invasive, expensive and often laborious, so this exciting development would address a major unmet need.

‘Having a lumbar puncture and even an MRI scan can be an uncomfortable and unsettling experience, which we know people with MS are keen to change.’

There are two different types of VOCs – volatile organic compounds.

Exogenous VOCs are tiny particles released by hundreds of household items which they are build into, including furniture, candles, incense and carpets.

An example is paint which has a strong odour initially which evaporates over time.

Endogenous VOCs are made from processes in the human body.

Phoebe Tate, from the University of Huddersfield, said: ‘They are the end product of the metabolic reactions going on in your body.

‘When you breathe them out, you can get a picture of whats going on the body.’

Research into VOCs is new and scientists don’t understand what each one means or where it originates.

Dogs have an extremely sensitive sense of smell and can pick up on VOCs. They are released during the early stages of many cancers, including ovarian, lung and colorectal.

Scientific studies have shown pooches can separate between blood and tissue samples donated from ovarian cancer patients and healthy people by picking up on minute quantities of VOCs.

Studies have also shown dogs can sniff out prostate cancer in a man’s urine, as well as breast and lung forms of the disease from compounds in a patient’s breath.

VOCs are unique to each type of cancer.

For example, a healthy lung and a lung infected with cancer exhale different compounds.

If a dog detects this on their owner, they may try to alert them.

Everyone exhales hundreds of volatile organic compounds (VOCs) from inside the body, but it is not fully understood what each one means.

VOCs are what dogs are able to sniff out in the early stages of many cancers, including ovarian and lung, research has shown.

Dr Kohlhaas’ comments were based on promising research by academics at the University of Huddersfield last year.

They looked at the VOCs exhaled in the breath of 60 participants, including healthy people and patients with different types of MS.

They found several novel VOCs that are ‘more or less abundant’ in the breath of people with MS compared to healthy people.

At least six VOCs are different between subtypes of MS, and therefore could be used to differentiate between people with relapsing MS and progressive MS.

Pheobe Tate, a masters student who led the study under the supervision of Dr Patrick McHugh, said the significance of these VOCs needs to be validated.

She told MailOnline: ‘We found six molecules, but we can’t say if it’s definitive, so we are speculative.

‘We’d have to check whether people with other inflammatory and autoimmune conditions have them.’

The work is yet to be published.

To see if the VOCs are unique to MS, the team’s next research will involve patients with neurological, autoimmune or inflammatory conditions.

Dr McHugh and colleagues are in the process of collecting breath samples from 500 people, a total of which 350 will have MS.

Ms Tate hopes the test will be rolled out across the NHS and used by GPs within the next five years.

It is understood, based on a 2017 study by Israeli researchers, that VOCs reflect changes in the gut microbiome of MS patients.

Currently the diagnosis of MS is based on symptoms which are vague, including fatigue, muscle stiffness and difficulty balancing.

MS damages nerves in the body and makes it harder to do everyday things, like walk, talk, eat and think. It’s relentless, painful, and disabling.

It is most commonly diagnosed in people in their 20s and 30s, and one of the most the most common causes of disability in younger adults.

As well as providing a rapid and inexpensive diagnosis method, the VOCs could also be an indicator of how patients are responding to drugs as well as their disease progression.

Soo Lyon-Milne, 53, from Stockport, lives with the secondary progressive form of MS. She said: ‘Had this test been available at the time my symptoms started, doctors could have diagnosed me a good ten years sooner.

‘There are no drugs for my type of MS and that might have given me a chance to have treatment.

‘Also MRIs can be quite scary – I’ve never thought of myself as a claustrophobic person but I am in those machines. It’s nerve-wracking. Anything to help others avoid it would be fantastic.’

WHAT IS MULTIPLE SCLEROSIS?

Multiple sclerosis (known as MS) is a condition in which the immune system attacks the body and causes nerve damage to the brain and spinal cord.

It is an incurable, lifelong condition. Symptoms can be mild in some, and in others more extreme causing severe disability.

It is more than twice as common in women as it is in men. A person is usually diagnosed in their 20s and 30s.

The condition is more commonly diagnosed in people of European ancestry.

The cause isn’t clear. There may be genes associated with it, but it is not directly hereditary. Smoking and low vitamin D levels are also linked to MS.

The majority of sufferers will have episodes of symptoms which go away and come back, while some have ones which get gradually worse over time.

Symptoms can be managed with medication and therapy.

The condition shortens the average life expectancy by around five to 10 years.