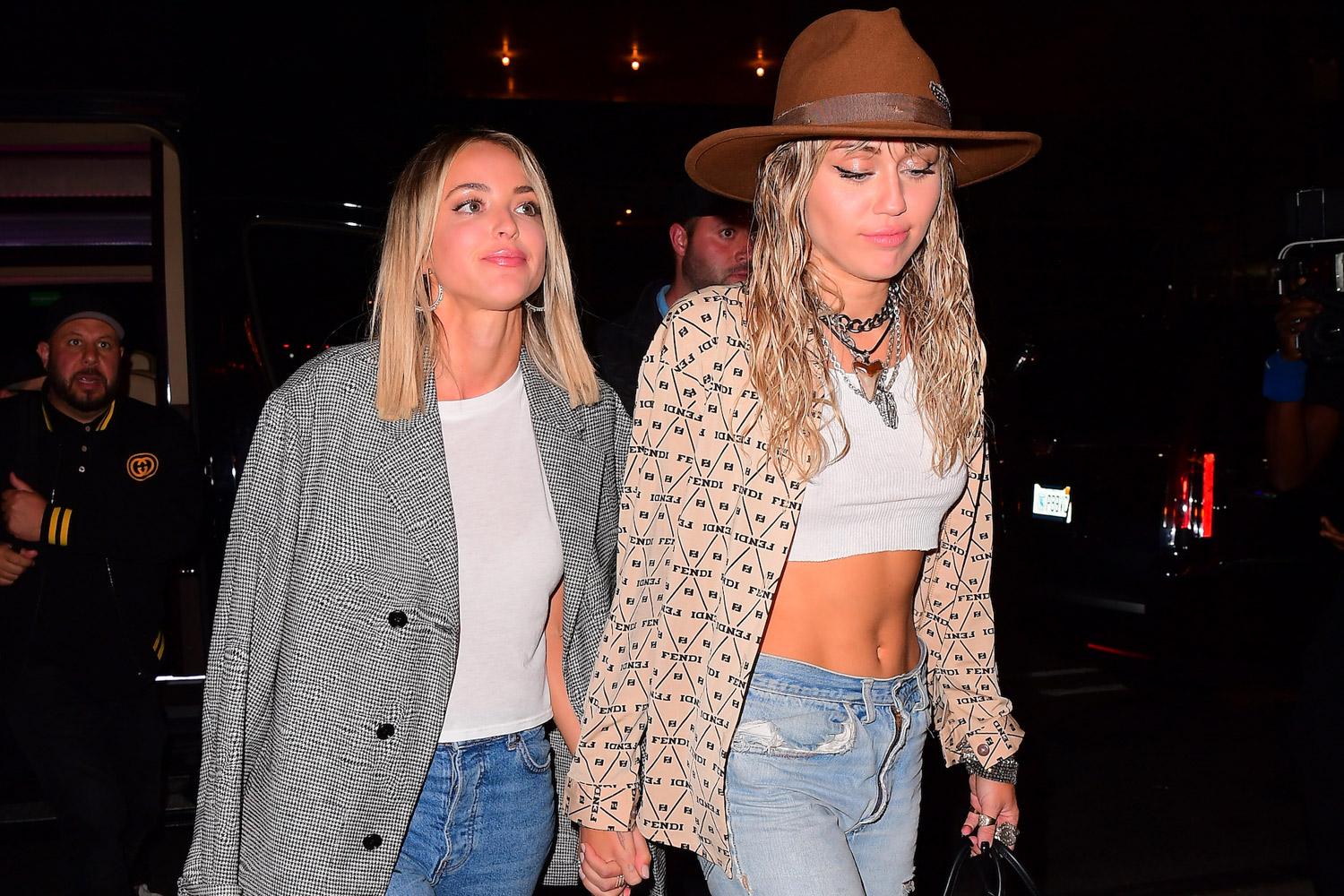 Miley Cyrus and Kaitlynn Carter arrived at the MTV VMA after –party hand in hand as the appeared together in public as a couple.

Cyrus shocked fans when pictured looking comfy with Carter by a pool, just hours after she confirmed her split from husband Liam Hemsworth.

The singer, 26, and her reality star, 30, arrived with the PDA at the follow-up event last night.

It is said that Carter had been at hand to support Cyrus while she gave an emotional performance of her Hemsworth break-up song Slide Away.

The actress revealed she had inked the lyrics of Pixies track “The Thing” on her arm while performing at the annual ceremony.

The lyrics, which detail a road trip from Salt Lake City to Las Vegas, state: “My head was feeling scared, but my heart was feeling free”, which was done by celebrity tattoo artist Winter Stone.

Right after the awards, the pair were seen getting out of a big black car as they walked into the event together.

The Hills: New Beginnings star, also Brody Jenner’s ex, appeared protective of Cyrus as she grabbed her girlfriend’s hand as they made their way through the paparazzi.

This is the former Hannah Montana star’s first major public appearance since announcing the split.

The song the singer performed before the after-party features lyrics which appear to be about the end of her relationship with Liam, including the line: “It’s time to let go.”

Their break-up was announced by Miley’s publicist, who said: “Liam and Miley have agreed to separate at this time.

“Ever-evolving, changing as partners and individuals, they have decided this is what’s best while they both focus on themselves and careers.

“They still remain dedicated parents to all of their animals they share while lovingly taking this time apart.

Carter and Cyrus romance first materialised in Lake Como as they holidayed together with friends just weeks after Kaitlynn confirmed her split from husband of one year Brody.

Cyrus was forced to shut down rumours that she was unfaithful in her marriage on Twitter.

The Wrecking Ball singer tweeted: “I can accept that the life I’ve chosen means I must live completely open and transparent with my fans who I love, and the public, 100% of the time. What I cannot accept is being told I’m lying to cover up a crime I haven’t committed. I have nothing to hide.

“It is no secret that I was into partying in my teens and early 20’s. I have not only smoked, but advocated for weed, I’ve experimented with drugs, my biggest song to date is about dancing on molly and snorting lines in the bathroom.

“I f***ed up and cheated in relationships when I was young. I lost a massive Walmart deal at 17 for ripping a bong. I got kicked off hotel Transylvania for buying Liam a penis cake for his birthday and licking it. I swung on a wrecking ball naked. There are probably more nudes of me on the internet than maybe any woman in history.

“But the truth is, once Liam & I reconciled,I meant it, & I was committed. There are NO secrets to uncover here. I’ve learned from every experience in my life. I’m not perfect, I don’t want to be, it’s boring. I’ve grown up in front of you, but the bottom line is, I HAVE GROWN UP.

“I can admit to a lot of things but I refuse to admit that my marriage ended because of cheating. Liam and I have been together for a decade. I’ve said it before & it remains true, I love Liam and always will.

“BUT at this point I had to make a healthy decision for myself to leave a previous life behind. I am the healthiest and happiest I have been in a long time. You can say I am a twerking, pot smoking , foul mouthed hillbilly but I am not a liar. I am proud to say, I am simply in a different place from where i was when I was a younger.”