Foreign Secretary Dominic Raab said private security is the most ‘likely’ option, rather than police, as the government looks at extra measures to ensure MPs’ safety 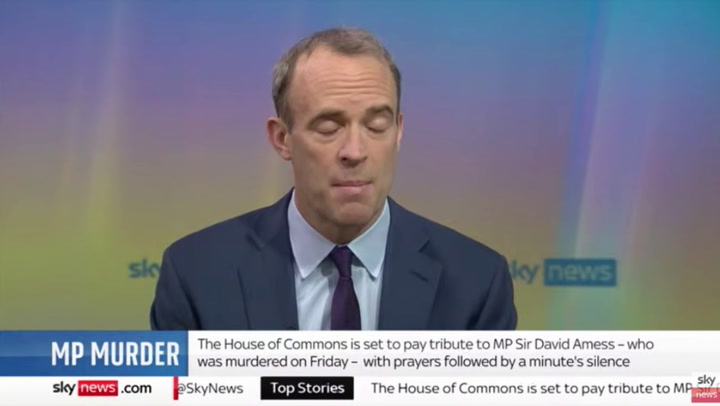 MPs are set to be offered more private security guards for their constituency events after the murder of Sir David Amess.

Foreign Secretary Dominic Raab today suggested private security is the most “likely” option, rather than police.

It comes despite the nightclub industry warning it is suffering a shortage of bouncers, with one in five venues having to cut hours due to a lack of security staff.

It’s thought MPs can already request private security for their surgeries, but one MP told the Mirror it is currently only available if there is a specific threat, on recommendation of police.

Home Secretary Priti Patel is looking at how to expand protection after MPs complained about inconsistency across the country.

Asked if there would be plainclothes police at MPs’ surgeries, Mr Raab told Sky News: “It depends on the individual.

“I think we’re more likely to look at things like private security guards, there’s already I believe money available for that.”

Get a daily morning politics briefing straight to your inbox. Sign up for the free Mirror Politics newsletter.

He added: “I probably wouldn’t choose to have them outside a surgery that I have. I think I would worry about the chilling effect, I’m not sure it’s necessary to have that.”

Mr Raab said he would not stand in the way of any MP, including female MPs, who wanted a police presence at surgeries.

But the Justice Secretary warned: “We don’t want a wedge to be placed between us and constituents.”

He added: “The problem you’ve got is a lot of people coming to see their MP, it’s quite a thing to do, it takes quite a bit of courage.

“They feel sensitive about it, they feel vulnerable. You do not want to add to that sense of foreboding as they’re waiting for a constituency surgery.”

Mr Raab, who receives close protection in his Cabinet job, told the BBC: “I’ve had three threats to life and limb over the last two years.”

It comes after Home Secretary Priti Patel said “we need to close any gaps” in the safety arrangements for MPs following the Conservative backbencher’s killing.

Justice Secretary Dominic Raab warned: “We don’t want a wedge to be placed between us and constituents”
(

Ms Patel told Sky News there were “other things, linked to policing and security as well”.

Asked if MPs could receive the level of protection they receive in Westminster – where there are armed police – she said: “All these issues and options are in consideration right now.”

The Times later reported the government has ruled out armed police for constituency surgeries and is expected to offer private security guards instead.

Yet the Night Time Industries Association warned over the weekend that a shortage of bouncers was ‘risking public safety’.

Chief executive Michael Kill said: “We carried out a survey a few months ago which found that security resource in the sector was only at 70%, and I am afraid that the situation has only deteriorated further since then.

“Whether it is through acting as a first line of defence against a terrorist attack, or intervening to break up violent incidents, licensed security staff are fundamental to public safety.

“The current shortages are beginning to put the public in real jeopardy.

“Like in other sectors currently seeing shortages, this is a long term issue and decline in security resources can be tracked back at least 3 years, but this has been hugely exacerbated by the pandemic with many licensed staff leaving the sector when the bars and clubs closed and now choosing not to return.

“Brexit hasn’t helped either, but it is far from the only factor at play here.”

Sir David was stabbed multiple times while at a constituency surgery at a church in Leigh-on-Sea, in Essex, on Friday.

Ali Harbi Ali, 25, has been arrested on suspicion of murder and terrorist cops are leading the investigation.

Sir David was stabbed multiple times while at a constituency surgery

Ms Patel has asked police forces to review security for MPs. Sir David is the second MP to be killed in recent years after Jo Cox was killed in 2016.

MPs have already had to beef up security, including installing new panic buttons and CCTV, after the 2016 murder of Jo Cox. Now they are sharing their fears on private WhatsApp groups with colleagues.

One MP told the Mirror on Saturday: “It’s got unremittingly worse over the last five years – I’ve never known it as bad.

“It’s 10 times worse than anybody thinks but a lot of us just don’t talk about it.”

The MP, who said they and colleagues have had death threats from both neo-Nazis and jihadis, said the biggest fear was around a tiny minority of people who are “seriously unwell” lashing out at public events.

“Most of us constantly live in fear of people with serious mental health issues at surgeries or public meetings losing the plot and going for you,” they said.

Another MP told the Mirror: “Women MPs are particularly worried about copycat attacks and even being attacked in their day to day on the school run, or to the shops.

“We want to be visible to our constituents but it’s scary with these risks.

“We shouldn’t have to wait for someone to die for there to be a whole flurry of action on keeping us safe.”