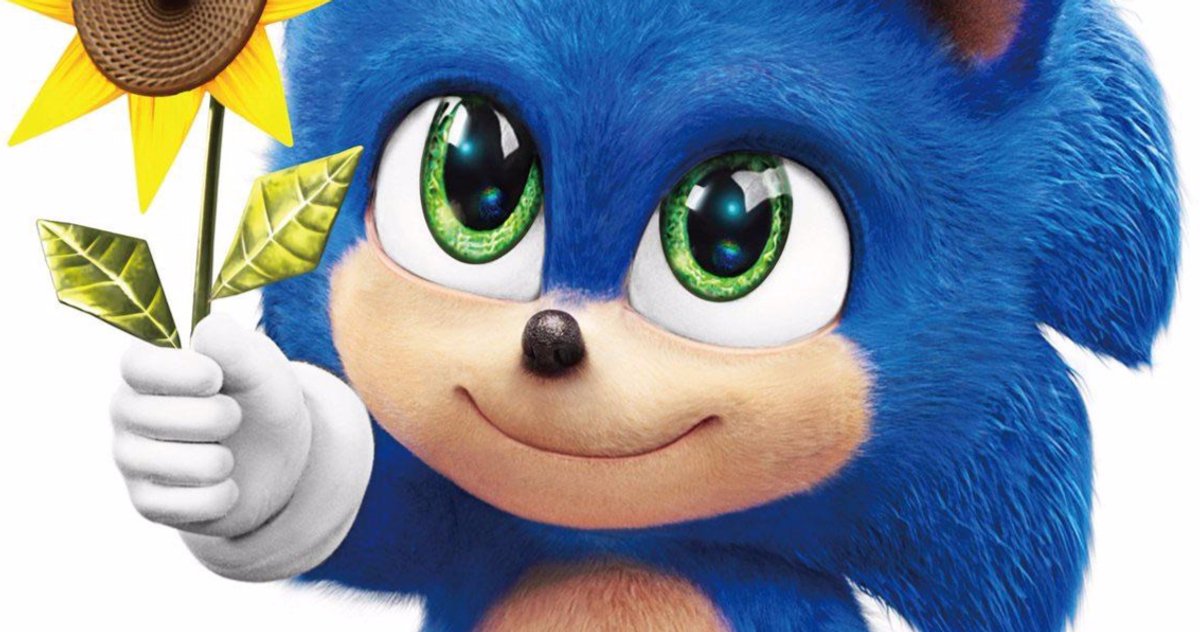 Baby Yoda may be surrendering his place as the internet’s favorite fictional character as a new player has entered the game. Paramount Pictures recently revealed a new trailer and poster for Sonic the Hedgehog and they introduce us to Baby Sonic. We’ve come a long way from that initial Sonic design that has the internet calling for this movie’s head. Now, we’re at a place where social media is already in love with the character as a child.

The Sonic the Hedgehog trailer kicks off with Sonic speeding around his homeworld, which should look familiar to those who love the video games. It concludes with Baby Sonic stopping to hold out a flower to someone, or something, off-screen. The little blue fuzzball is undeniably adorable and Twitter has already started to go crazy for him. Though, quite a few have questioned what the creation would have looked like back when the movie was still using the original Sonic design. Would it be a toothless, long-legged monstrosity? If the studio has its way, we’ll probably never find out.

In any event, this footage, coupled with the new Sonic The Hedgehog poster, which we’ve included below as well, should go a long way to help bring this movie some much-needed positive attention. When the first trailer dropped, the internet went ballistic over Sonic’s design to the degree that the studio felt it would hinder the movie’s box office potential. As such, they went back to square one and totally redesigned the Sega icon. When the more recent trailer arrived, showcasing the redesign, the conversation around the video game adaptation completely changed. Whatever money and time Paramount spent on the redesign was likely money well spent. Especially if they can get tie-in Baby Sonic merchandise on shelves around the release.

Sonic the Hedgehog centers on the (mis)adventures of Sonic as he is trying to make his way through the complex nature of life on Earth, which is far removed from his homeworld. Sonic joins forces with his newfound human best friend Tom Wachowski (James Marsden) to try and stop the villainous Dr. Robotnik (Jim Carrey) from capturing Sonic and using his great powers to take over the world.

Jeff Fowler is making his feature directorial debut, with Deadpool director Tim Miller producing. The rest of the cast includes Neal McDonough, Adam Pally and Natasha Rothwell, with Ben Schwartz voicing Sonic. Video game movies have historically been tough to crack, but Hollywood has made major strides in recent years. Will this be more of a Detective Pikachu situation? Or are we looking at the next Super Mario Bros.? We’ll know soon enough. Be sure to check out the poster, trailer and some of the social media reactions to Baby Sonic for yourself. Sonic the Hedgehog is set to hit theaters on February 14, 2020, from Paramount Pictures.

Like for baby Yoda, retweet for baby Sonic. pic.twitter.com/EH4nEJ7haW

WAIT, ARE YOU TELLING MEWE COULD HAVE GOTTEN A BABY VERSION OF OLD MOVIE SONIC?????

WE WERE R O B B E D pic.twitter.com/t1x9DQfXBa

The official Babey of the hour is baby Sonic from the upcoming Sonic the Hedgehog movie pic.twitter.com/uvYsKlhhwY

Nigga, Baby Sonic. My heart.
There’s no way to make this tweet hard b.
This shit just cute my nigga. pic.twitter.com/dhnX3X9qRa

*Baby Sonic is trending and exists*