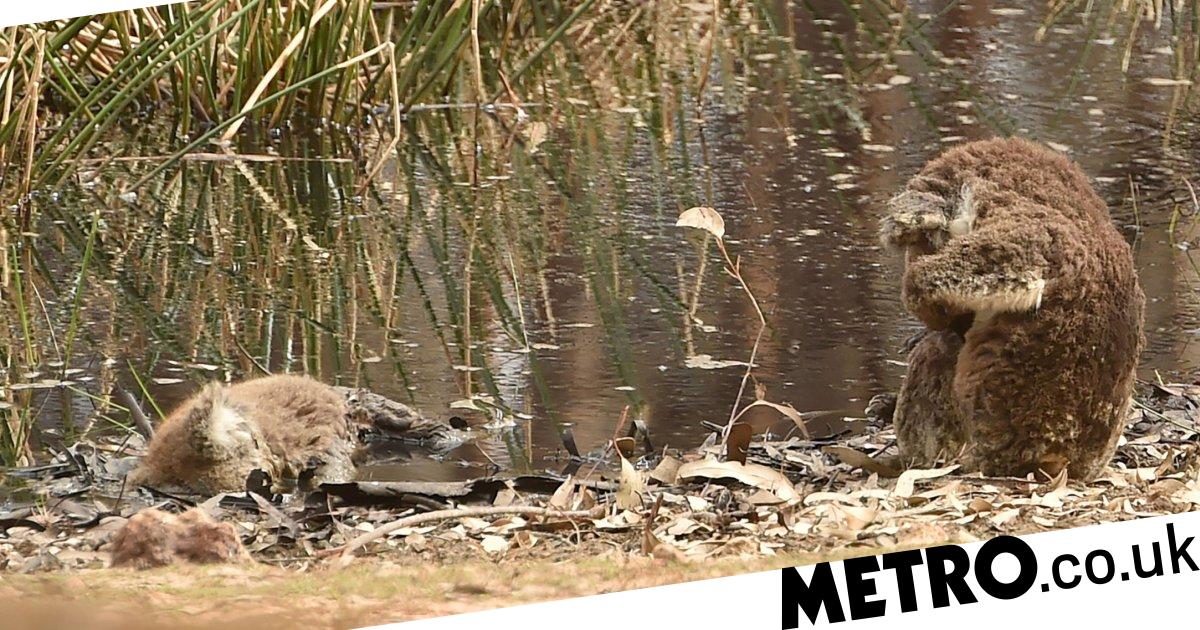 Heartbreaking images show the moment a koala mourns over the loss of its friend.

The pictures show the koala appearing to bury its face in its arms in sorrow, while its companion’s lifeless body lays nearby in a river.

An animal rescuer from Humane Society International is seen rushing over to pick up the injured koala in a towel and carry it to safety.

The images were taken on Wednesday, on Kangaroo Island, south of Adelaide, where an estimated 37,000 koalas have been killed in the bushfires.

Over a third of the island has been burned down, leaving the ground covered with the charred bodies of animals.

Kelly Donithan, HSI’s senior specialist in disaster response, said every time they find an animal alive ‘it feels like a miracle’.

She told One Green Planet: ‘These are some of the toughest scenes I’ve ever witnessed as an animal rescuer – the bodies of charred animals as far as the eye can see.

‘But as we set out each day on search and rescue, we’re still finding animals alive, injured, dazed or traumatised, and it’s such a relief to be able to give them immediate life-saving assistance.’

He said the figure was ‘pretty devastating’, adding that the fires were ‘particularly ferocious and fast-moving’ meaning ‘a lot of the wildlife was incinerated’.

Australian Environment Minister Sussan Ley said koalas could be listed as endangered for the first time.

Despite incredible efforts from rescuers to save as many koalas as possible, the continuing blazes and the destruction of their habitat has left them in the difficult position of where to send them once they’ve recovered.

Kangaroo Island is the only area in the country where the koala population is free of chlamydia, which is fatal for the animals.

This means saving the animals on the island is crucial as they have long been seen as an ‘insurance population’.

An estimated 600,000 square miles of Australia’s third biggest island has gone up in flames, according to Nasa.

WWF-Australia estimates that 1.25 billion wild animals have died in Australia during the crisis in addition to livestock losses, which the government expects will exceed 100,000 animals.

READ  Cassowary attack: giant bird kills owner in Florida after he fell
Share on FacebookShare on TwitterShare on PinterestShare on Reddit
newsgrooveJanuary 16, 2020