Mount Etna eruption: Is it safe to travel to Italy after lava bursts from Sicily volcano? 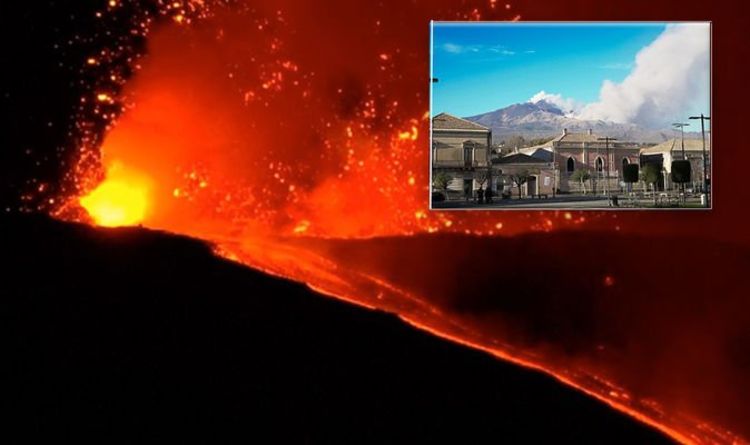 What is the current situation at Mount Etna, in Italy?

The lava flows were accompanied by a Strombolian activity from the main craters.

Have airports in Italy been closed?

UK companies including budget airlines Ryanair and easyJet frequently fly into the terminal, in the south of the country.

The airport’s website states all routes for this morning have departed, albeit some with delays.

A Ryanair route to Rome scheduled to leave at 11:15 has been delayed for an hour, yet it is unlikely to be related to the eruption.

An estimated €100million in damage was been caused to the area surrounding Sicily’s Mount Etna in January, following a spate of earthquakes.

A 4.8 magnitude earthquake on Boxing Day hit an area north of Catania, damaging buildings and injuring about 30 people.

At the time, Italy’s National Institute of Geophysics and Volcanology (INGV) said as much of six million cubic metres of lava has spewed out of Mount Etna since a new fissure opened up on Christmas Eve, covering an area of just over one square kilometre.

In February, Catania Airport – one of Sicily’s two air transport hubs – was closed following an eruption.

It posted on Twitter: “Cause eruption #Etna, from 8:30 today WEDNESDAY 20 FEBRUARY TWO SECTORS of the air space of #CTAairport are closed Limitations to 4 arrivals every hour: possible delays and inconvenience even on departures. For ANY information on individual flights, contact airlines.”

The VolcanoDiscovery website warned: “Although no more lava is being erupted right now, strong gas and dense ash emissions continue from the Bocca Nuova crater as a sign that magma is close to the surface.”

Is Mount Etna dangerous for tourists to Italy?

Seismic activity in the area remains high, with this increasing during the past few days.

Such bursts of lava action, as seen last night, can occur several times a year.

Despite this, Mount Etna is considered as one of the safest volcanos in the world, with communities living around the site and a host of tourist spots present.

The eruptions are thought to have caused a total of 77 deaths in its history.

Its unpredictable behaviour sees it being one of the most guarded volcanos in the world.

Tourists are able to climb up Mount Etna, yet are urged to take extra and specific precautions and walk in groups.