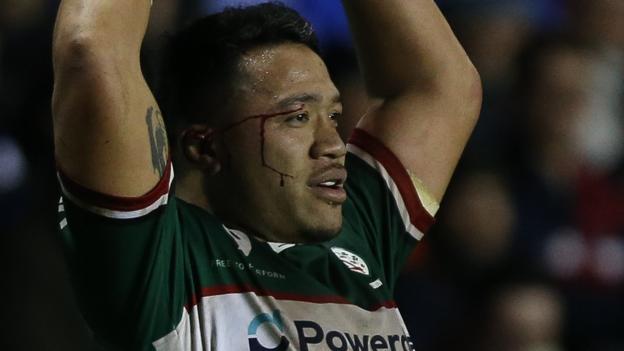 London Irish hooker Motu Matu’u has been banned for five weeks after being sent off for a dangerous tackle in the loss to Worcester on Saturday.

The 32-year-old Samoa international was red-carded for a challenge on Duncan Weir in the 33rd minute of the Premiership match at Sixways.

Matu’u will miss Premiership games with Exeter, Northampton and Harlequins.

He will also miss the European Challenge Cup pool matches away at Bayonne and at home to Scarlets.

“This was a reckless tackle which, as the player accepted, he had got technically wrong,” RFU independent judicial officer Jeremy Summers said.

“The player accepted the charge and apologised to Duncan Weir post-match.”

Motu’u was banned for three weeks in September after being cited for a dangerous tackle on Russia’s Vasily Artemyev while playing for Samoa in the World Cup pool stages.

It meant Motu’u was only entitled to one week’s mitigation from a six-week starting point for the ban for Saturday’s offence.

“He will serve a suspension of five meaningful weeks until 17 February which takes in to account two weekends when London Irish and the player have no matches,” Summers added.