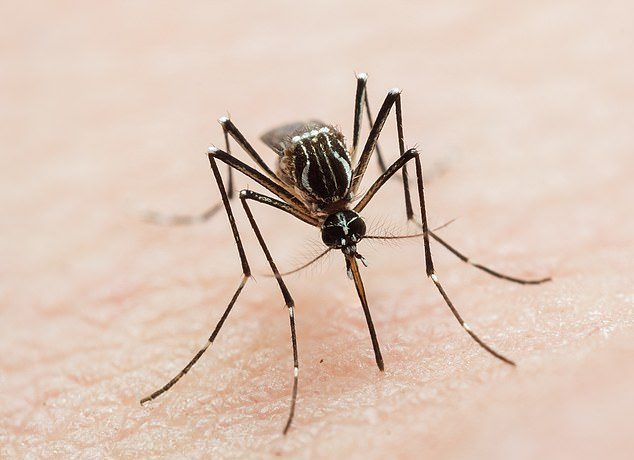 Mosquitoes infected with a unique bacteria have led to a staggering drop in dengue fever in a region of Indonesia, researchers say.

Between 2017 and 2020, scientists in Yogyakarta, Java, released millions of mosquitoes injected with Wolbachia, a bacterium that prevents them from transmitting the dengue virus.

The team found that infections were 77 percent lower in treated neighborhoods, compared to areas not exposed to the infected insects.

Dengue, a tropical virus that causes high fever and aches, infects some 400 million people each year and kills up to 25,000. 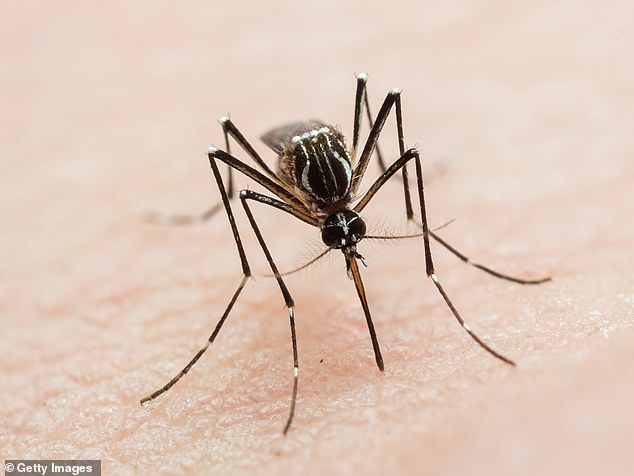 Dengue, a tropical virus that causes high fever and aches, infects some 400 million people each year and kills up to 25,000. It is carried by Aedes aegypti, a mosquito that thrives in tropical climates and breeds in stagnant water

In a trial program coordinated by the World Mosquito Program, mosquitoes infected with Wolbachia were released into 12 randomly selected areas in Yogyakarta, a city of more than 300,000, while twelve other neighborhoods were selected as controls.

In a study published this week in The New England Journal of Medicine, researchers confirmed dengue was diagnosed in just 2.3 percent of people living in neighborhoods where the modified mosquitoes had been released, compared to 9.4 percent of those in the control districts.

The study, which involved more than 8,000 individuals, also found dengue cases requiring hospitalization were reduced by 86 percent in the treated areas.

‘This is a great success for the people of Yogyakarta,’ said co-author Adi Utarini, a public health researcher at the University of Gadjah Mada. ‘Indonesia has more than 7 million dengue cases every year. The trial success allows us to expand our work across the entire city of Yogyakarta and into neighboring urban areas.’ 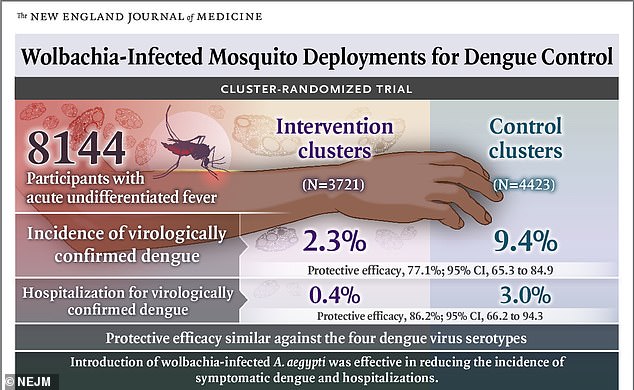 More than 8,000 residents were tested in a total of 24 neighborhoods in Yogyakarta, Java. Not only were dengue rates 77 percent lower in the areas where the infected mosquitos were infected, but cases requiring hospitalization were 86 percent lower 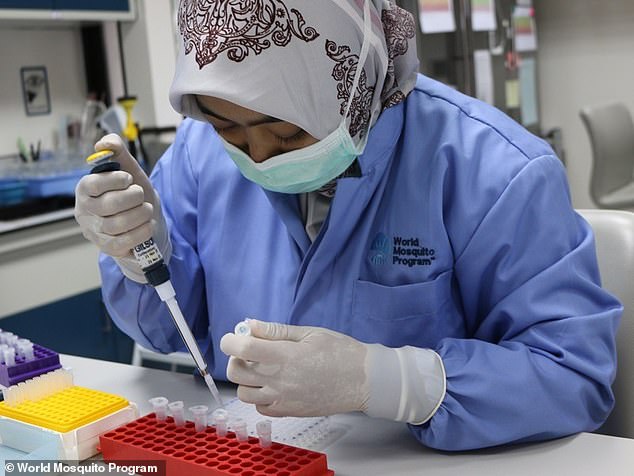 Scientists in Yogyakarta, Indonesia, infected mosquitoes with Wolbachia, a bacterium that prevents them from transmitting dengue fever. Neighborhoods where the infected insects were released reported 77 percent fewer cases

The bacteria also affect reproduction, ensuring the insects only have Wolbachia-infected offspring.

The result is a growing population of insects that don’t pass on the virus—Utarini said she could see a day when cities in Indonesia were free of the virus.

BUGGING OUT: THE THREAT OF DENGUE FEVER

Dengue is a viral infection spread by mosquitoes.

It is caught by people visiting or living in Asia, the Caribbean, and North, South or Central America.

Mosquitoes in the UK do not spread the virus.

In most cases, the infection is mild and passes in around a week.

There is no cure or specific treatment.

Patients can relieve their symptoms via painkillers, staying hydrated and resting.

In rare cases, dengue symptoms can develop into severe dengue.

Elderly patients, or those with other medical conditions, are most at risk.

Severe dengue fever symptoms can include:

Severe dengue is usually treated via a blood and platelet transfusion, IV fluids for rehydration and oxygen therapy if levels are low.

In Indonesia alone there are more than 7 million cases each year.

The disease causes high fever, severe headaches and joint pain and can result in lethal complications that kill up to 25,000 people every year.

WHO reports cases of dengue have spiked 30-fold in the past 50 years as humans encroach into mosquito habitats and contribute to climate change.

A 2018 trial with Wolbachia-infected mosquitoes in Australia also saw rates of dengue plummet, but the effects were not compared to control areas.

A subsequent test in Vinh Luong, Vietnam, led to an 86 percent decline in dengue compared to a nearby resort town.

Scientists have called the Yogyakarta experiment a ‘gold standard’ trial.

‘This is the result we’ve been waiting for,’ Scott O’Neill a microbiologist and director of the World Mosquito Program, said in 2020, when the results were first tallied.

‘We have evidence our Wolbachia method is safe, sustainable and reduces incidence of dengue.’

The Indonesian trial ended a few months early because of the coronavirus pandemic, but O’Neill said the results were encouraging enough that the strategy should start being deployed ‘worldwide across large urban populations.’

Wolbachia occurs naturally in around 60 percent of all insect species, including dragonflies, fruit flies and moths.

Scientists first discovered it in mosquitoes living in the drainage system beneath Harvard University in the 1920s.

Aedes aegypti, the mosquito which carries dengue, thrives in tropical climates and breeds in stagnant water.

It also carries yellow fever, Zika and the chikungunya virus.

Typically, countries plagued by the pests spray insecticide, but this only keeps them away temporarily and the insects can also develop resistance.

Modifying mosquitoes to combat infectious diseases has become an increasingly popular tactic around the world, but it’s not been met with universal acceptance.

In April 2021, residents of the Florida Keys protested plans to release close to a billion gene-hacked Aedes aegypti over a two-year period.

The project, a collaboration between the Florida Keys Mosquito Control District and Oxitec, a British biotech company, aims to reduce the numbers of Aedes aegypti by altering their DNA to pass on a particular protein.

When they mate, the protein ensures female offspring do not survive the next generation.

With fewer females in each subsequent generation, the hope is the overall mosquito population will decline, along with transmission rates of mosquito-borne diseases. 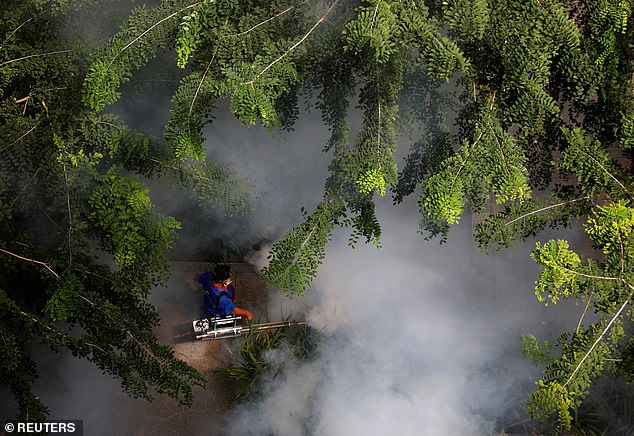 A worker sprays for mosquitoes in Singapore. Insecticides only keep mosquitoes away for a few days and insects can develop resistance

The modified mosquitoes are all male, and Oxitec contends that because only female mosquitoes can bite, the program poses no risk to humans.

But, says Barry Wray of the Florida Keys Environmental Coalition, ‘People here in Florida do not consent to the genetically engineered mosquitoes or to being human experiments.’

Dana Perls, food and technology program manager at Friends of the Earth, called the program a ‘dark moment in history’ and demanded the EPA ‘halt this live experiment immediately.’

Other residents say the EPA did not require peer review or preliminary trials for GE mosquitoes before releasing them into the wild. 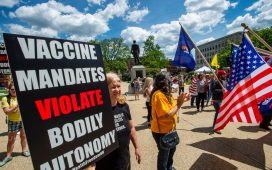 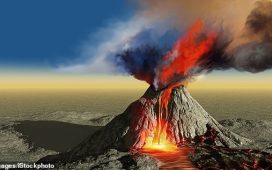 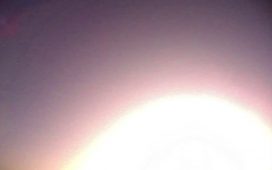 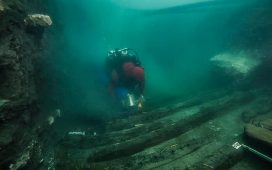