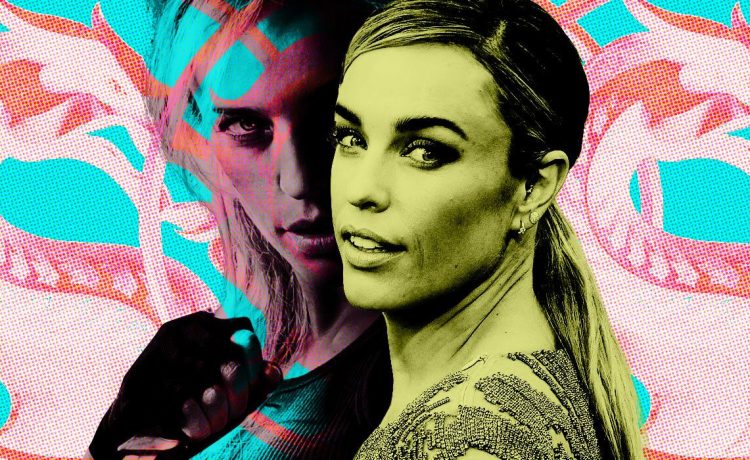 Jessica McNamee is no stranger to the big budget Hollywood scene, but Mortal Kombat might be one of her most high-pressure gigs yet courtesy of the massive Mortal Kombat fanbase and the studio’s high hopes for the potential franchise starter. The movie puts the spotlight on Lewis Tan as Cole Young, an MMA fighter who thought nothing of the dragon marking he’s had since he was born – until he meets a Special Forces Major named Jax (Mehcad Brooks) who urges Cole to go see Sonya Blade (McNamee). That’s when Cole learns that his marking actually means he’s been chosen to fight the champions of Outworld in an effort to save Earthrealm.

With Mortal Kombat hitting theaters and HBO Max on April 23rd, McNamee joined us for an episode of Collider Ladies Night to recap her journey from idolizing Julia Roberts to becoming a Hollywood star herself. Stay tuned for the full conversation to hear all about McNamee’s experience working on the standout indie horror film The Loved Ones, how she scored a role in The Vow, memories from the set of The Meg, and more. But how about we give you a little tease of the Mortal Kombat portion of our conversation right now?

What’s the first thing you do when you score the role of one of the most iconic characters in the video game franchise? Here’s how it went for McNamee:

“I actually just Googled Sonya Blade. I did all this reading, I went into the fandom. I mean, it is endless. And then I found it really helpful for me to watch YouTubes of people playing the game, and I got a real eye for what was going on and I learned more about the world.”

For McNamee, it was less about doing a deep-dive into the character of Sonya specifically and more about brushing up on the whole world of Mortal Kombat. She laughed and admitted, “I was a Mario Kart pro, not so much a Mortal Kombat pro growing up so there was a lot to learn.”

RELATED: Naomi Scott Revisits the ‘Terra Nova’ Cancellation and How It Impacted Her Career

When the prep work was done, McNamee got to bring that knowledge to a set under the leadership of Simon McQuoid. Yes, McQuoid is a very accomplished commercial director, but Mortal Kombat still marks a mighty ambitious first feature. So what was it about McQuoid that gave McNamee the confidence he’d make the transition well? Here’s what she told us:

“I can’t say enough great things about the guy. He’s just such a good dude, and then being on set with him as well. You wouldn’t even tell. And he’s not a first time director in the sense that he’s directed some unbelievable things – amazing commercials and worked with some of the best sportsmen in the game. So he’s been under intense pressure in his career and this was a high pressure film. You know, there’s a lot of pressure from the fans, from the studio I’m sure, a lot of cooks in that kitchen.”

Not only did McQuoid manage to keep his cool managing all of that pressure, but he also did what he could to help his cast deliver their best possible work in the process. Here’s how McNamee put it:

“We were also all fighting to give out the best performances possible and that meant, at times, fighting for – not against each other, but for ourselves. Fighting to find our voices, and he just managed it with such grace. I never saw the guy ever lose his temper. It was amazing. He just was always so cool, calm and collected.”

McNamee then further clarified the nature of the “fight” she experienced while working on Mortal Kombat:

“I shouldn’t say ‘fight’ because the great thing about Simon McQuoid is that he let us play constantly. So even if I wanted this, whether it be a line or a look or whatever it was, he would always say yes. There was never any, ‘I know better.’ He would go, ‘Yup, let’s give it a go!’ And then it was whatever looked best at the end of the day. So, no, there was nothing I had to fight for. I could ask, ‘Could I try this?’ Or I just try it and he would be like, ‘Great,’ or ‘Let’s try something else.’”

If you’re looking for more from the Mortal Kombat star, stay tuned because Collider Ladies Night has you covered! Keep an eye out for that full episode to hear more about some of McNamee’s favorite Mortal Kombat set pieces, what it was like working on Battle of the Sexes with Emma Stone and Steve Carell, and so much more.

KEEP READING: ‘Bright’: Here’s Why Joel Edgerton Will Always Be an Orc to Margaret Cho

In case you worried that the Oscars would be too short!

Perri Nemiroff has been part of the Collider team since 2012. She co-hosts Collider FYC, The Witching Hour and hosts the interview series, Collider Ladies Night. Perri’s a proud graduate of Columbia University’s Film MFA program and member of the Broadcast Film Critics Association. Perri splits her time between Los Angeles and New York, but devotes every waking hour to her cat, Deputy Dewey.