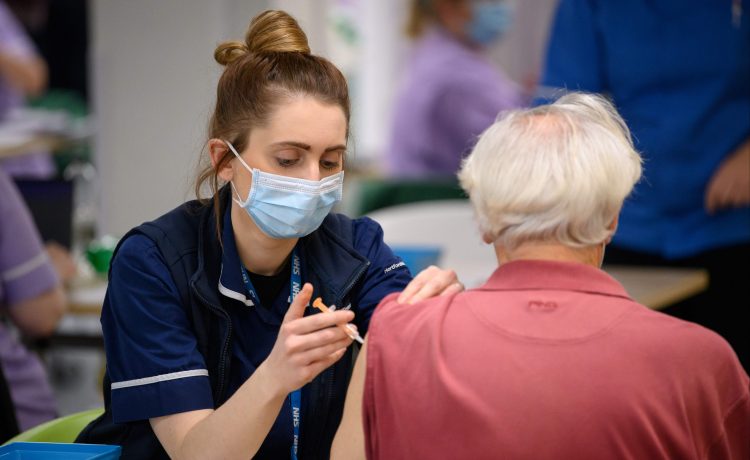 ore than 3 million people in England were vaccinated against coronavirus in just over a month, new figures show.

A total of 3,189,674 Covid-19 jabs were administered in the country between December 8 and January 14, according to provisional NHS England data released on Friday.

This includes first and second doses.

The figures come as the Government prepares to rapidly scale up its mass-vaccination programme – administering as many as half a million jabs from next week, according to reports.

Ministers are confident that the UK will have enough doses to hit Boris Johnson’s target of inoculating the 15 million most vulnerable Britons by February 15.

A senior Whitehall source told The Times that the pace of the scale-up could mean that all 32 million over-50s receive their first vaccine dose by mid to late March.

The postitive developments come after the Government was sharply criticised over the distribution of vaccines across the country.

A total of 447,329 doses were administered in the Midlands between December 8 and January 10, with 387,647 people receiving at least one injection.

READ  Coronavirus UK: Children are 56% less likely to get infected

The NHS England figures for the month indicated that about half of people aged 80 and over in north-east England and Yorkshire had received their first dose.

By contrast just three in 10 people aged 80 and over in eastern England had received their first jab, with a similar proportion in London.

Downing Street defended the operation, with the Prime Minister’s official spokesman telling reporters: “We’ve rolled out the vaccination programme across the country and we’ve ensured that every area receives a fair share of the vaccinations and we will continue to do that.

“You will continue to see the vaccination programme accelerate through this month and throughout February and the PM’s been clear that we will ensure there is a vaccine centre close to everybody by the end of the month.”

The North East and Yorkshire was just behind the Midlands in terms of doses administered, with 433,045.

Mr Khan responded to the discrepencies by saying: “I am hugely concerned that Londoners have received only a 10th of the vaccines that have been given across the country.

“The situation in London is critical with rates of the virus extremely high, which is why it’s so important that vulnerable Londoners are given access to the vaccine as soon as possible.”

A spokesman for the NHS in London said: “We have more than 100 vaccination sites up and running across London, including the NHS Covid-19 vaccination centre in the ExCeL London, and more are opening all the time.

“London is getting its fair share of vaccine supply for the priority groups we have to vaccinate by mid-February.”

Mr Johnson has previously acknowledged that while parts of the country were doing “incredibly well” in vaccinating people it was “less good” in other areas.

Separate figures from NHS England show nearly a quarter (23 per cent) of first doses in England up to January 7 went to people aged 49 and under.