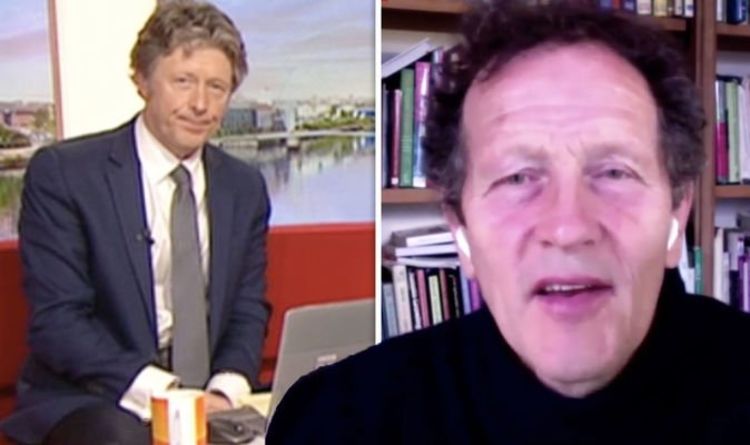 Monty Don, 65, took BBC Breakfast host Charlie Stayt, 58, by surprise when he appeared via video link for an interview on the show this morning from his study. The presenter arrived on the programme to discuss the upcoming series of his hit BBC show Gardeners’ World with Charlie and his co-host Naga Munchetty, 46.

However, as he is most often seen tending to his garden in most of his TV appearances, Charlie was left questioning why the horticulturalist was chatting to them from inside his home for a change.

“Not in the garden, in your study I believe, is that right?”

Explaining his choice of location for the live interview, Monty declared: “Yes.

Monty replied: “I love filming and I think you want to do well – the whole team wants to do well – and just because it’s a very calm programme.

“What you see is gentle and flows, you know as well as I do there’s a lot of paddling under the surface to made that happen and there’s a lot of skill – not from me in particular – but everybody involved is really good at it.

“And so, I certainly feel, ‘today this could be our last programme ever, let’s make it the best we’ve ever done. Let’s really go out on a high’, and tomorrow we’ll do the same!’

“And, that way, it ups the ante a bit,” he continued to explain.

It comes as Monty will be back in Longmeadow welcoming viewers and Spring into his garden on the popular show.

He took to Twitter to announce the return of the programme in view of his 214,000 followers this morning.

The gardening enthusiast penned: “You have waited all winter – but the new series of Gardeners World is back tonight at 9pm on BBC2.

BBC Breakfast airs every day at 6am on ITV and Gardeners’ World returns this evening on BBC Two at 9pm with a brand new series.