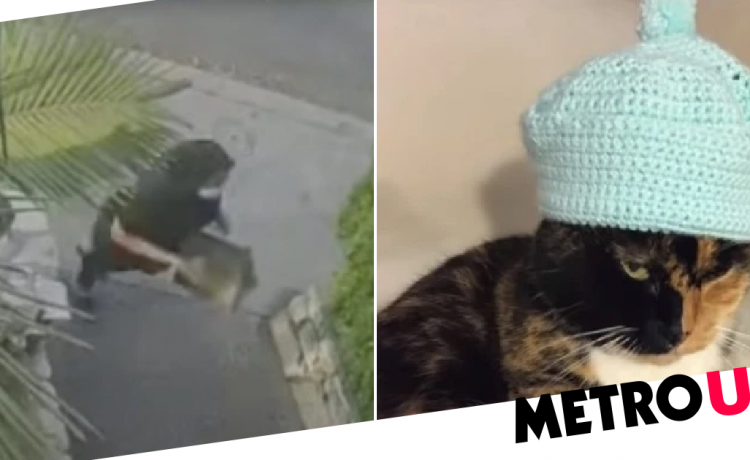 An Uber Eats driver allegedly stole a family’s 18-year-old cat from the front yard before dropping of their food delivery order to a neighbor. A surveillance camera captured the moment that the unnamed delivery driver scooped up the cat and put it in a brown paper bag in the backseat of her car.

Patrick Lewis of Studio City, California, said he realized his cat Hog was missing on Tuesday and immediately started asking neighbors if they knew anything about it, according to CBSLA. One of Lewis’s neighbors said an unrecognized woman picked the cat up and another neighbor said they had security surveillance footage of the cat thief in the act.

‘I’ve actually only watched it one time. I can’t,’ Lewis said of the clip. ‘For me, it’s heartbreaking to see. That’s my little girl being kidnapped pretty much. That’s what it looked like to me.’

The Uber Eats driver apparently took Hog’s collar off and left it on the sidewalk, according to FOXLA 11.

Another one of Lewis’s neighbors watched the video and said it was a woman working for Uber Eats who delivered her food a few days prior. The neighbor still had the delivery receipt which showed the driver’s first and last name.

‘The weirdest thing, that she literally – she picks up the cat, throws her in and then drops off a delivery from The Counter upstairs, like just kind of… I don’t know and then just drives off,’ Lewis told the TV station. ‘She doesn’t look like a stray. She’s not a…  she has a collar.’

Lewis called Uber Eats about the incident and said he and his family were not mad at the driver but were heartbroken and simply wanted Hog home.

‘We are working to get the cat returned, stand ready to help in the police investigation, and will take the appropriate action against the delivery person,’ Uber Eats stated.

Lewis said he found Hog when she was a kitten in Brooklyn 18 years ago. The elderly cat was loved by neighbors and the subject of drawing contests for children. The children would also make outfits for Hog.

‘Hog is in a weird way the first thing I kind of was a dad to, so we just want her back,’ Lewis said.