The first day of the Breeders’ Cup meeting at Del Mar racecourse in California concluded in extraordinary and chaotic circumstances on Friday after Modern Games, trained in Newmarket by Charlie Appleby, was scratched from the Juvenile Turf on veterinary advice and then reinstated, before running out an easy winner as boos rang out from the grandstands.

The drama began when Modern Games’s stable companion Albahr, drawn on his outside in stall two, became upset in the gate and put his feet over the front of the stall. “He freaked out and put his legs across [the gate],” Frankie Dettori, his rider, said. “Thanks to the boys who got me out of there, it could have been nasty.”

An initial inspection of Modern Games suggested that he had sustained a minor injury in the incident, and an announcement was made at the track that Modern Games had also been scratched. As a result, he was taken out of the betting pools, but a subsequent veterinary inspection showed that he was fit to compete and he was allowed to take his place in the field, to run for purse money only.

The race then unfolded ideally for Modern Games and William Buick, who arrived with a storming run in the straight to win with something to spare. The spectators at Del Mar, however, did not react warmly to the spectacle of a Breeders’ Cup winner that could not be backed, and loud boos and jeers rang around the course as Modern Games returned to the winner’s enclosure.

“I didn’t quite know what happened,” Buick said afterwards. “I could hear some people talking on walkie-talkies about scratching my horse, but I don’t think they realised my stall had been opened by the handlers to avoid the other horse.

“He’s a real pro, he gave me a great ride around and ultimately he was a very good winner.”

Earlier on the card, Corniche made all the running to give Bob Baffert his fifth win in the Breeders’ Cup Juvenile and move to the front of the market for the Kentucky Derby next May, but may need to switch stables if he is to line up in the Run for the Roses at Churchill Downs next year.

Corniche was drawn widest of all in 12, but Mike Smith was still able to get him across to the rail before the first turn and he controlled the remainder of the race from the front. He found a decisive finishing kick when challenged in the home stretch and appears to be a leading contender for the first leg of the Triple Crown next year.

Baffert, though, was suspended from saddling runners at Churchill Downs for two years when Medina Spirit – who runs in the Breeders’ Cup Classic at Del Mar on Saturday – tested positive for betamethasone, a banned corticosteroid, after crossing the line in front in the Kentucky Derby earlier this season.

“This race is so important for Corniche’s career,” Peter Fluor, the colt’s owner, said afterwards. “We wanted to get to this race and see how we did. Then Bob and I will sit down and talk, and we’ll see what happens. It would be difficult [to move to a different trainer] but Bob and I have always talked, we’ve been candid, we’ve said we’ve got to do what’s right for the horse.”

David Loughnane’s Go Bears Go, in the purple colours of the football agent Kia Joorabchian’s Amo Racing operation, finished strongly in the Breeders’ Cup Juvenile Turf Sprint but could not get past the front-running Twilight Gleaming, who was in front from the first stride.

Twilight Gleaming was a third consecutive winner in the race for both Ward and Irad Ortiz Jr, her jockey, and is now likely to be aimed towards either the Commonwealth Cup or King’s Stand Stakes at next year’s Royal meeting at Ascot.

“I was really confident in this filly,” Ward said. “I feel bad for the other two owners because we are all trying to win, but this filly, she had good spacing from her win in France [last time] and every work at Keeneland just kept getting better and better. She was coming into it just fresh and fit and ready to go and she did it.”

Joorabchian’s string has grown to more than 100 horses in the past few years and Go Bears Go was within a length of being his first winner at the highest level.

“Coming to the Breeders’ Cup and finishing second is heartbreaking but it is incredible,” he said. “He ran a stormer and this horse has shown a lot of heart, right from his first race. A performance like this in America is incredible.”

Pizza Bianca, owned and bred by the celebrity chef Bobby Flay, found a miraculous run through the field from the home turn under rider José Ortiz to beat Malavath, trained by Francis-Henri Graffard in Chantilly, by half a length in the Juvenile Fillies’ Turf.

Cachet, from George Boughey’s Newmarket stable, and Loughnane’s Hello You both ran well to finish fourth and fifth respectively, but could not resist Pizza Bianca’s stretch run after she rounded the final turn with just one of her 13 rivals behind her. 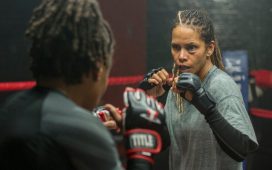