Barco, 20, is attracting interest from across Europe after an impressive season with the MLS team, while he has also caught the eye in Argentina’s youth teams.

Arsenal and United are believed to feature on a long list of admirers of the Argentine ace which also includes Inter Milan, AC Milan, Roma, Sporting Lisbon, Benfica, Lille and Valencia.

Barco, who is considered one of the South America’s most exciting youngsters, joined Atlanta from Independiente for a reported $15million (£11.6m) fee in January 2018 – an MLS record at the time.

And with Europe’s top clubs ready to pounce, Atlanta are looking to make a tidy profit on the youngster, who can play as a left winger, second striker or attacking midfielder.

The MLS franchise want $25million (£19m) for Barco, according to Italian outlet Calciomercato .

Record has reported that Portuguese giants Sporting Lisbon are weighing up an approach for the 20-year-old.

According to the publication, Sporting view the Atlanta man as an ideal replacement for star playmaker Bruno Fernandes if they lose the Portugal international in January.

Despite seeing his season interrupted by injuries and international commitments, Barco finished the recent campaign with four goals and three assists in 15 MLS appearances for Atlanta.

He helped Frank de Boer’s side to the play-offs, where they made it all the way to the Conference Finals before they were beaten by Toronto FC.

READ  The art of photography: sporting images – in pictures

Barco also featured for Argentina at the FIFA Under-20 World Cup in Poland earlier this year.

He started all four of his country’s games, scoring a brace in their opening 5-2 win over South Africa, before they lost to Mali on penalties in the last 16. 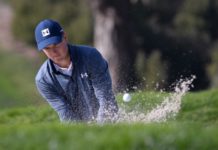 Spieth drops to No. 51 in Official World Golf Rankings