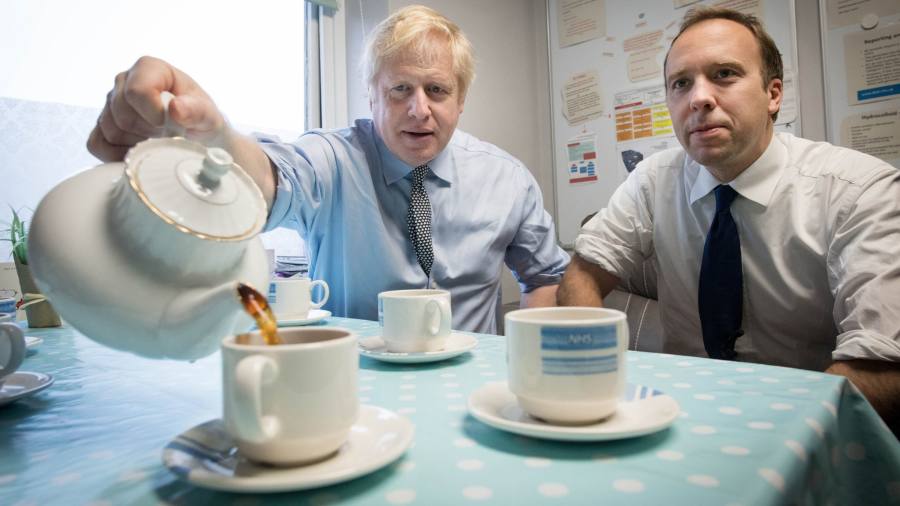 The government has ripped up the rulebook on managing public money to stem an NHS staffing crisis that has threatened to overshadow the general election campaign.

Matt Hancock, health secretary, has signed off an emergency package of pension reforms to give incentives to high-earning doctors to work extra shifts. But in a letter to England’s NHS chief, he warned on Friday that the move was “incompatible” with tax-planning rules for public bodies and “could constitute tax avoidance”.

Mr Hancock’s highly unusual move reflects growing Tory fears that increasing pressure in hospitals, particularly in emergency departments, could tip over into a full-blown crisis days before the poll on December 12. Under the emergency measure, the NHS would cover tax bills incurred by frontline clinical staff in England who have breached their annual pension savings limits.

Hospital consultants across the UK are refusing to take on extra shifts over fears the additional income could trigger six-figure pension tax charges. NHS England had sought special permission for the emergency measure after patients faced delayed or cancelled operations.

Simon Stevens, chief executive of the NHS, wrote to Mr Hancock this week saying previous efforts by the government to deal with the pension tax issue were “clearly not sufficient”. But in signing off the new measures, Mr Hancock warned the NHS that it could fall foul of tax rules.

“Depending on the detail of how you put the proposed approach into practice, the scheme could constitute tax avoidance. In deciding on this detail, you should seek to minimise this risk,” Mr Hancock wrote in his response to Mr Stevens.

Steve Webb, director of policy with Royal London, and a former pensions minister, said: “It is astonishing that the NHS and the NHS Pension Scheme are having to bend the rules about tax planning to fix a problem that is all of the Treasury’s making.”

The state of the NHS has been at the centre of the election campaign, with both the Conservatives and Labour seeking to suggest they would do most to protect the taxpayer-funded service. An Ipsos Mori poll this week showed the health service had overtaken Brexit as the issue of most concern to voters. However, as election day approaches, the risk of voters going to the polls amid an unfolding winter crisis are rising.

Information gathered by the Academy of Medical Royal Colleges, cited by Mr Stevens, charted the toll that the pensions issue is taking on the NHS. At Mid Essex Hospital Services NHS Trust, one consultant has dropped two sessions, “meaning [that senior clinician] had given up anaesthesia”. Meanwhile, the functioning of the high-dependency unit would be threatened at weekends.

Despite his warning, Mr Hancock said he was “content” to direct the NHS to proceed with its emergency proposals, “given the importance that this government attached to the NHS and to its performance over winter . . . and the necessity of this intervention to address operational capacity at this time”.

The NHS said it had “sought and received all necessary approvals for this temporary measure from the Treasury and wider government”.

'How you do music in 2020': Brad Paisley puts on a socially-distant drive-in concert in Nashville