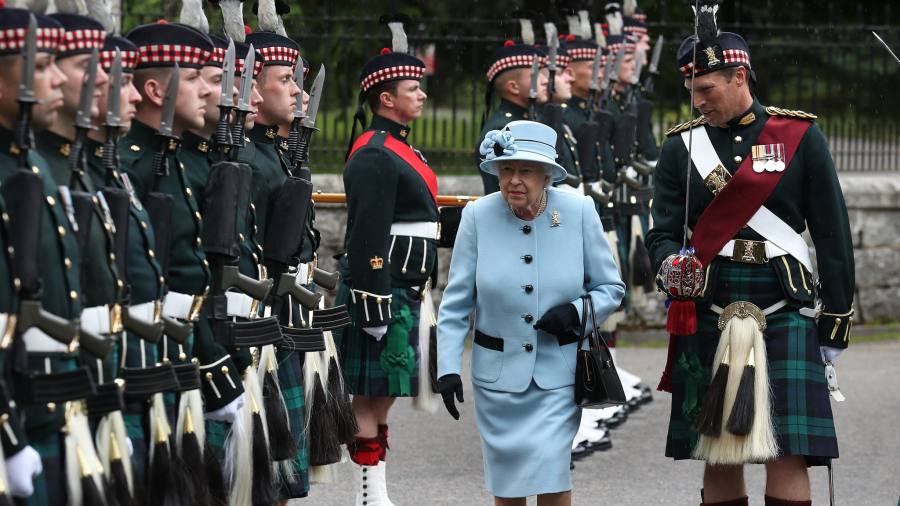 The Queen has so far survived Brexit relatively unscathed, but the sight of the angular Jacob Rees-Mogg approaching the door of her Scottish retreat on Wednesday morning was a sign of trouble ahead.

Mr Rees-Mogg, leader of the House of Commons, had flown to Balmoral castle to seek her formal approval for the suspension of parliament because Boris Johnson wants to thwart MPs’ attempts to halt a no-deal Brexit on October 31.

Accompanied by Mark Spencer, the chief whip, and Natalie Evans, leader of the House of Lords, Mr Rees-Mogg set out the case for a move that would be deemed by John Bercow, the Commons Speaker, as “an offence against the democratic process”.

The “prorogation” of parliament at the height of the Brexit crisis had been discussed in advance by a “golden triangle” of senior officials, whose job it is to protect the monarch from political controversy.

At lunchtime on Wednesday royal orders were issued from “the court at Balmoral” confirming the suspension of parliament in the week starting September 9 until October 14, threatening a constitutional crisis.

Constitutional experts insisted the monarch had no choice other than to accept Mr Johnson’s request for a prorogation — the formal break between two parliamentary sessions ahead of a Queen’s Speech.

But Jeremy Corbyn, Labour leader, sought a meeting with the Queen to discuss the decision. Kate Osamor, a Labour backbencher, tweeted: “The Queen. Did. Not. Save. Us.”

Some Labour MPs even threatened to occupy the Commons chamber. “We will call on people to take to the streets,” said Clive Lewis, shadow Treasury minister.

With Mr Johnson insisting the UK must leave the EU on October 31 with or without a deal, the Downing Street architects of the move to suspend parliament sat back and watched the outrage grow at Westminster, confident they had sown disarray among pro-EU critics who seemed unsure how to respond.

Dominic Cummings, Mr Johnson’s chief adviser, and Nikki da Costa, his legal expert, had hatched the plan to limit the ability of MPs to tie the prime minister’s hands.

Most cabinet ministers were not told of the decision until Mr Johnson broke the news to them on a conference call at 10am on Wednesday. “Ministers didn’t know — it was very tightly held in Number 10,” said one ministerial aide.

There was quiet satisfaction in Downing Street at what one insider called “hysterical Remainers” going on the airwaves to condemn Mr Johnson’s move, although the public seemed to share some of the MPs’ concerns.

It seems that we’ve probably been snookered somewhat

A snap survey by polling organisation YouGov found that 47 per cent of the public thought the suspension of parliament in the middle of the Brexit crisis was “not acceptable” compared with 27 per cent who believed it was acceptable.

As sterling fell by as much as 1 per cent on Wednesday amid fears that a no-deal Brexit was looking more likely, opponents of the UK crashing out of the EU without an agreement admitted that they were facing a ruthless new enemy in Number 10.

“It seems that we’ve probably been snookered somewhat,” said one opposition figure, saying MPs would have to decide quickly whether to stick to their plan to try to derail a no-deal Brexit by passing legislation, or move straight to a no-confidence vote in Mr Johnson’s government.

Meanwhile in Brussels, David Frost, Mr Johnson’s Brexit negotiator, used a meeting to reassure EU officials that the UK government was working on proposals for a revised Brexit deal that would involve replacing the so-called Irish backstop in Theresa May’s withdrawal agreement.

The backstop is meant to prevent a hard Irish border, but Eurosceptic Conservatives strongly oppose the provision because it could lock the UK into close ties with the EU through a customs union.

Back in London, Mr Johnson’s team said the prime minister’s prorogation plan allowed time for parliament to approve a revised Brexit deal, as well as frustrate MPs who wanted to stop Britain leaving the EU without an agreement.

Instead of suspending parliament until October 31 — which had been discussed as one draconian option — officials said Mr Johnson had created time for MPs to ratify a tweaked withdrawal agreement, if he secures one at a crunch EU summit on October 17-18, or to topple him in a no-confidence vote if he pushes ahead with a no-deal Brexit.

But that was scant consolation for Mr Johnson’s critics, who accused the prime minister of closing down the Commons at a moment of national crisis, setting up the greatest battle between parliament and the government seen in Britain in modern times.

MPs return to the House of Commons after their summer break. Mr Johnson’s opponents could legislate to stop a no-deal Brexit on October 31 or move a vote of no confidence to try to topple his government

READ  Feed the family for less than £1.70 a head with Mrs Crunch’s delicious recipes

EU leaders’ summit in Brussels. The moment when it becomes clear if Mr Johnson intends to take Britain out of the EU with a deal or no deal

Mr Johnson promises MPs votes on Brexit strategy. Time is running out for MPs to vote down the government if a no-deal Brexit is imminent

Downing Street is eyeing this date for a possible “people versus parliament” general election, if MPs succeed in stopping Brexit