NewsGroove Uk
NewsGroove Uk > Animal > Milly may be a shelter dog, but she rescues me every single day
Animal 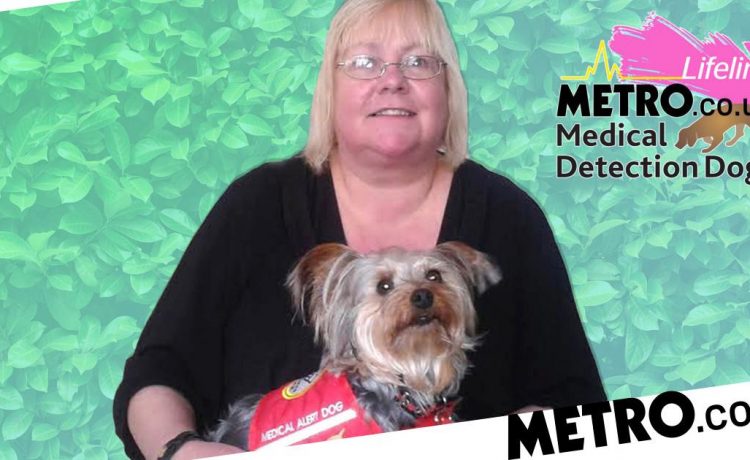 Until my little Yorkshire Terrier, Milly, came into my life, I felt like a prisoner in my own home.

My health was so unstable that I’d become too scared to go out and being stuck within the same four walls day in, day out, left me feeling incredibly isolated and low.

I’ve been an unstable diabetic, with Type 1 diabetes, for most of my life, but things took a turn for the worse when I was pregnant with my son, Adam, in 1989.

Suddenly I experienced very high or low blood sugar levels without any warning.

It meant that within seconds I could start shaking or talking nonsense, not aware of what was happening to me. In no time, I’d often end up fitting on the floor. Sometimes I even bit my tongue.

Each time I’d get rushed to hospital, where I’d have to stay for days until my blood levels stabilised, as they simply didn’t have the equipment to deal with Type 1 diabetes as they do today.

With each episode, I became more and more of a shell of my old self. It was very frightening and eventually I became too petrified to leave my house in case it happened in public or when I was all alone.

At home, I even installed a doorbell in my son’s room with the remote on my bedstead so that if I managed to press the button either before or after an episode he could come through and help.

It got to the point where I was left feeling so depressed, I didn’t even want to talk to anyone. My diabetes literally dominated every hour.

It meant I wasn’t able to work either, but I was desperate to put my time to good use, so eventually decided to volunteer for a charity.

I knew I could do admin work from home and, as I loved dogs, looked for one that worked with them.

That’s when I came across Medical Detection Dogs, a charity that trains dogs to sniff out diseases such as cancer, Parkinsons and, now, Covid. I didn’t even know such dogs existed and thought what they did was amazing.

Although I soon started volunteering for the charity, it didn’t occur that they might be able to help me.

It wasn’t until I’d been with them for a few months that a member of the team casually asked why I was housebound. When I told them about how my diabetes dominated my life, they asked if I had ever considered a Medical Assistance Dog.

They explained that as well as training dogs to sniff out illnesses, they also worked with them to help people with severe health problems like mine. For example, they were trained to alert someone if their blood sugar levels were growing unstable.

That same day I started my application. I knew it would take a while to find the perfect dog for me as back then in 2009 the charity was only starting out in Buckinghamshire and I was based hundreds of miles away in Scotland.

Cost: To take part in either Woof and Walk for MDD there is a registration fee of £35. Marathon-distance fundraisers will be required to raise a minimum of £300 per person, while those choosing the 10k, are expected to raise it per family. 80% of that amount (£240) will need to be raised eight weeks before the challenge and the remainder within four weeks of completion.

Anything else I should know? Once you’re signed up we’ll invite you to join our Metro.co.uk Lifeline fundraising and Facebook pages, where you’ll get meet our other walkers, share top money-raising tips, as well as getting handy hiking advice from our experts.

So, how do I sign up? If you want to sign up to our 10k Woof and Walk for MDD click here. For those up for the marathon-distance hike, please click here. Both tell you everything you need to know about this year’s amazing Metro.co.uk Lifeline challenge.

For T&Cs from our event organisers Charity Challenge, click here.

In total it took three years before I was finally paired with Milly, an 18 month old Yorkshire Terrier.

The charity told me how she was a rescue dog who had been handed into Wood Green Animal Centre in a cardboard box with her siblings, her mum and dad. She was covered in matted fur, faeces and urine.

As Milly was happy to interact with people and had a good sense of smell, they decided she would be a great candidate for the charity and trained her up.

When I first went to meet her at the charity’s headquarters I remember her bounding over to me straight away and sitting under my chair. It was if Milly had chosen me rather than the other way round. We bonded immediately and it really was love at first sight.

Even that first night, when my son and I stayed with her in a hotel near to the charity, she alerted me to my dangerous blood sugar levels by pawing at my arm.

This time they were too high and even though she had only been trained to alert to low levels, she still knew something was very wrong.

Thanks to Milly I could quickly check what they were and stabilise them. I didn’t need to go to hospital or even see a doctor.

I knew that night that she was going to change my life forever.

One of the first things I did when Milly was settled with me at home, was pull that damned doorbell off my bed, as I knew it would be completely redundant with her around.

It’s been nine years since I got Milly and I have never once had to call the emergency services or see the inside of an ambulance. I can’t explain the feeling of independence that tiny, sweet dog has given me.

She alerts me to both high and low blood sugar levels faster and earlier than my continuous blood monitor can, which means I have plenty of time to either administer insulin, take a high glucose food or get myself to safety.

During the day she gets my attention by pawing at me or jumping up at my leg, while at night she will lick my face. If my blood sugar is low then it is a great excuse for a midnight snack!

Some days I wonder how much money Milly has saved the NHS – it must be thousands.

I know that she really enjoys her work, too. I like to think that being with me, Milly feels just as loved and safe as I do by having her at my side.

I’ve gone from not daring to leave the house, to going out for walks with friends and seeing family (when we’re not in lockdown).

What’s nice is that not everyone around me feels on edge either. No one is worried about me suddenly falling ill or asking whether I’ve taken my meds or checked my bloods. Now, if I start talking rubbish they know it is just me waffling on and I’m not going into an episode!

As well as the huge change in my confidence, I’ve lost over 4 stone too, as I’m getting out and about so much. Until Milly, I’d never even set foot in the gym – now she sits in a basket next to me as I work out.

The most wonderful thing though, is that my son feels he can now safely leave me at home. He was always too worried and would often get calls at work when I’d been taken ill, but now I’ve got Milly he doesn’t have to be anxious about me.

Milly hasn’t just changed my life, she’s changed all our lives. She gives us all a sense of security.

One day she might need to retire, but if that happens I’m going to keep her with me and get another dog. I could give her back to the charity so she can live out the rest of her years with a foster family, but I can’t imagine life without her.

If anyone needs proof of how important Medical Detection Dogs is, they only need to meet me and Milly.

She may have been a rescue dog, but she was the one who rescued me.


MORE : The Metro Lifeline charity campaign is back and this year we need you – and your dog – to help out!


MORE : Alexandra Burke: ‘My mum had diabetes – medical detection dogs could have helped her’


MORE : I know a dog’s sense of smell can save a life because it happened to me

This year sees the return of our brilliant charity campaign: Metro.co.uk Lifeline.

Our aim is simple – to raise as much money as possible for charity with YOUR help.

For 2021 we have chosen to support Medical Detection Dogs, a vital organisation that helps train dogs to sniff out serious diseases such as cancer, Type 1 diabetes, Parkinson’s and coronavirus.

As well as sharing their story to help raise awareness, readers, charity supporters and celebrities will also be taking on a 26-mile trek or 10k dog-friendly hike across the Oxfordshire countryside on Saturday 19 June, 2021.